Watch Bison launch 9 yo girl into air at Yellowstone — While her parents run away!

Parents running away leaving their child exposed to a charging Bison is not only stupid but tells you more about parents today that they would be stupid enough to get this close to a unpredictable animal that weighs Hundreds of pounds and is dangerous! What were these people thinking? 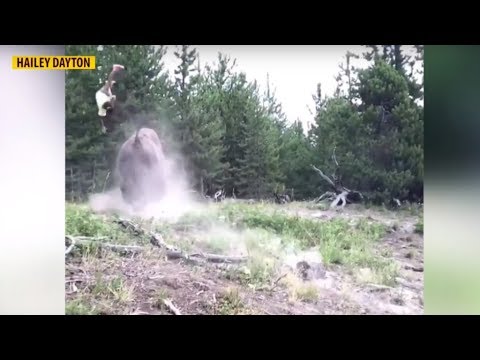 Liberals. What more can you say?

I guess it was the Bisons fault and should have been shot.

He’ll probably have to be now unfortunately just like dogs have to be put down when they bite a human.

After attacking one human he’ll just be much more likely to attack another in the future.

This family is to dumb to know the Bison is a wild and unpredictable animal. If any animal feels threatened they will attack. Maybe we can get the Bison an appointment with an animal psychologist about its fear of people.

Even domesticated bison will simply explode from time to time with little or no warning.

Young bulls are like teenage boys, old bulls know they are nearing their end.

They are all inherently violent and dangerous creatures.

That is why buffalo and bison hunting is considered to be among the most dangerous you can hunt world wide, along with the fact they can soak up so much lead and deal out a world of hurt before expiring.

Yellowstone bison injure a lot of people annually and fairly frequently attack cars passing through the park for no apparent reason as well.

About thirty years ago on a ranch near here where they have a large herd of bison an old bull was just walking along beside a work truck with four cowboys in it and just hung a horn in the bed near the tail light and opened it up like a beer can all they way to the headlight as though he were simply making the point that it really was his road.

If you want to kill a good horse just try roping a yearling calf with short horns.

Those parents should have their license to breed revoked.

The parents should be cited and held accountable.

That is why buffalo and bison hunting is considered to be among the most dangerous you can hunt world wide, along with the fact they can soak up so much lead and deal out a world of hurt before expiring.

Hunting “Tatonka”
Is a right of passage for my kin and is a creature not to be trifled with but respected! We give thanks to its power and the sustenances it has provided! We are waiting for when a white one is born for it is a sign!

I’m fortunate to have hunted American Bison in NM, Neb, and SD and Cape Buff in S. Africa. Accidentally had to kill a charging bull in the RSA with a contact shot when the hunter and PH both failed to put stoppers in him.

I was just to crippled up at the time to run.