Was Hillary Clinton once involved in sex slavery and Satanism?

It is a truly shocking charge; and I therefore am unsure if I entirely believe it.

Still, there appears to be verification from “a former publicist from the cult.”

Note: Those who do not like Hillary Clinton–and I certainly do not–should not automatically jump to the conclusion that this is true.

The same, however, in reverse is true: Those who do like Hillary Clinton–or, at least, who despise her opponents–should not automatically jump to the conclusion that it is untrue.

The source, admittedly, is a right-wing site. But I do believe that this matters far less than the apparent verification, noted above.

Anyway, here is the link:

All accusers are to be believed.

Honestly, she’s a disgusting human being that we should stop talking about. She defended a child predator, thought he was guilty and bragged about getting him time served. That should have ended any political career and had her shunned from society.

That Hillary belongs to an evil degenerate cult is beyond question. The real unhappy part of that is, it’s the Democrat party. It’s becoming closer and closer to the old communist party we used to know and ridicule, because it was so impotent in America. Those were the good old days.

Was Hillary Clinton once involved in sex slavery and Satanism?

I’d say she sold her soul to the devil long ago in exchange for political power and wealth.

I had a massive Pizzagate thread at the last place. I saved a ton of my work. Will dump it here. 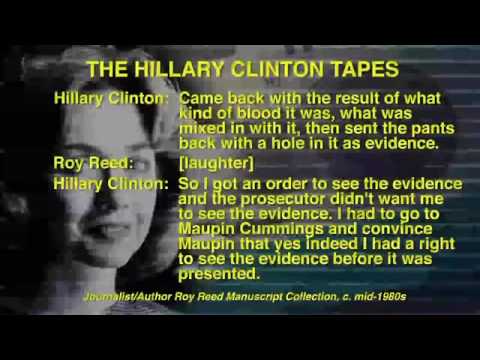 Here was the exact moment. . .

I also think what was particularly vile was the foundation she set up to help Haitians after the earthquake. She capitalized on absolute tragedy to line her pockets.

Anyone who could vote for or even not find her repulsive for that alone needs to have their head examined.

I had a massive Pizzagate thread at the last place. I saved a ton of my work. Will dump it here.

I suggested a serious matter in the OP.

But I really did not expect a flippant and unserious reply…

Nothing to see. It was just a “matter”.

The hero Comey … looks like the Clintons have given the order to make Comey the fall guy.

Does a bear shit in the woods?

“Tonight on 60 Minutes we discuss the Right Wing conspiracy to entrap Hillary Clinton for being found standing over a body, knife in hand, yelling that she did it, was glad she did it and would do it again…”

In the whitewater investigation, her fingerprints were literally found on documents she had said she had never seen and were hidden in a Clinton family room of the white house.

Those were supposed to have Vince Foster’s notes written in the margin … meaning they’d been removed from his office after / while his body was being staged in Fort Marcy Park.

Or those Rose Law records (IIRC) found in the trunk of the one car out of the whole junkyard that inclement weather caused to open … I’ve always thought that was the Lord’s doing because it sure proved that neither the complicit media nor the Democrats cared one jot about when one of their own did wrong.

They had his fingerprints too.

They were found in the Clinton family part of the white house and Hillary bitch said … “wat…me worry?”