Want to Lighten the Student Debt Load? Federal Financing Is the Problem, Not the Solution

The rising costs of tuition and mounting student loan debt loans for American students have become an understandable focus of this round of presidential hopefuls.

The average cost of tuition and fees for full-time undergraduate students has tripledfrom around $4,000 a year in 1970 to well over $12,000 a year in 2016. The Federal Reserve estimates that outstanding student loan debt is around $1.48 trillion. Unsurprisingly, students have struggled to pay these staggering costs, with roughly 20 percent of student loans either delinquent or in default by 2018.

Clearly, this is a serious problem that demands a serious response. Unfortunately, many of the proposals put out so far could merely make the situation worse. For example, most of the Democratic candidates support expanding the Pell Grant program to include more recipients with more federal funding.

A new policy brief by Mercatus senior research fellow Veronique de Rugy and research assistant Jack Salmon examines the nuances of federal higher education funding to understand the effect that such proposals could have on overall education affordability and access. They find that doubling down on the policies that got us here will have a predictable result. To address the higher education cost problem head on, policymakers should avoid and reform policies that lead to increases in tuition and therefore debt.

Why have college prices skyrocketed since the 1970s and 1980s? Ironically, policies meant to expand higher education affordability have had the adverse effect of making it less affordable for everyone.

De Rugy and Salmon discuss how federal higher education policy notably changed with the passage of the Middle Income Student Assistance Act in 1978. This bill “expanded eligibility for federally subsidized loans to all undergraduate students, regardless of financial need, and expanded eligibility for Pell Grants to middle-income students.” Pell Grants were further extended in the 1980s, and in the 1990s several other federal financing options became available. Government aid to higher education expanded from a mere $3 billion in 1970 to an astounding $160 billion in 2017.

This steady increase of government aid to higher education is mirrored in rising tuition costs and nearly insurmountable debt loads over the same period. It is true that many people used these programs to attend college over this time. But this “assistance” came at a high cost in the form of unbearable tuition hikes. These policies have ensured that the debt burden for today’s students is far greater than in any era in history.

Former Secretary of Education William J. Bennett wrote way back in 1987 that while financial aid may benefit students in the short-term, federal loans and grants affect the economic gears behind tuition in subtle ways.

Unfortunately, educational institutions react to federal loans in ways that disadvantage students. Instead of allowing students to attend college at the discounted rate after government subsidies, colleges use these subsidies to charge a higher tuition overall. The artificial stimulus inevitably leads to higher tuition prices overall, giving the illusion of tax-funded benefit in the short-term and increasing the burden of loans in the long-term.

This is not the only adverse effect of government-subsidized tuition. Universities disbursing federal aid often use the overall rise in tuition to increase prestige, lowering the price of school on the surface and thereby increasing demand. This leads to more competition, which eventually pushes out lower-income students, canceling out any “good” that student loan supporters purport.

Many studies have empirically corroborated Bennett’s thesis. Bradley Curs and Luciana Dar measure the changing of net prices in state financial aid policy and determine that overall tuition prices are lower when states increase merit-based aid over loans. Stephanie Cellini and Claudia Goldin contribute to the Bennett hypothesis even further with their findings on federal aid programs versus for-profit trainings, finding that students opt for the latter when the former prove too rigorous.

As de Rugy and Salmon conclude, “the evidence broadly suggests that institutions of higher education are capturing need-based federal aid.” The overall effect of federal student aid may have generated up to a 102 percent increase in tuition from 1987 to 2010.

Better Ways to Onboard Students

The past decades of experience with federal student loan programs shows they have been a well-intentioned but ultimately self-defeating failure. Rather than expanding higher education access to those who otherwise could not afford to attend college, federal loan and grant programs have made a university education more expensive for everyone.

Proposals to expand upon these policies will only make the problem worse. This is not to say there is nothing that can be done about higher education affordability. First, the federal programs that have led to runaway higher education costs should be reformed or disbanded.

Next, de Rugy and Salmon discuss alternative measures like institutional aid, which have empirically been found to expand access without increasing tuition costs or taxpayer liabilities. Institutional aid consists of grants which never need to be paid back, come at no cost to the tax-payer, and are awarded based entirely on merit, leaving room for students from all socioeconomic backgrounds. Perhaps this kind of aid would become more attractive in the absence of federal grant and loan programs.

Finally, the authors suggest that these federal programs may have had the adverse effect of encouraging young Americans to pursue a college education when vocational school or on-the-job training and apprenticeships may have truly been a better fit for them. Our population is diverse, with diverse skills and aims, and our educational policies should reflect that. Policymakers should consider how our laws encourage or discourage such pursuits, and amend them accordingly. 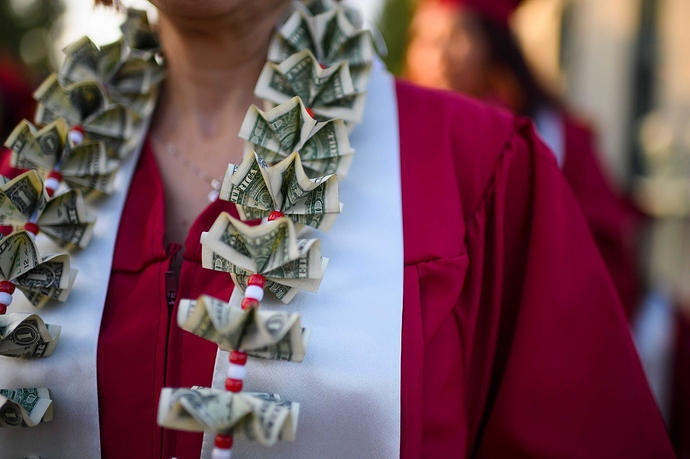 Want to Lighten the Student Debt Load? Federal Financing Is the Problem, Not...

The rising costs of tuition and mounting student loan debt for American students have become an understandable focus of this round of presidential hopefuls. The average cost of tuition and fees for full-time undergraduate students has tripled from...

Remember folks… Corporatism is NOT Capitalism.

Also remember…federal student loan debt is the US Treasury’s #1 Asset. Good luck getting rid of that!

In my opinion the massive loans given to students have indirectly subsidized universities, causing massive capital misallocations into such ‘productive’ pursuits as gender studies and diversity departments. It’s another path to hell paved with good intentions.

The student loan situation is retardedly easy to fix, because its caused by regulatory interventions and exceptions.

Main problem: student loans cannot be discharged through bankruptcy. For a creditor, the understanding that your customer can declare bankruptcy to escape their debt is why creditors will offer all kinds of different payment plans and reduced interest for people who get behind on payments, so besides allowing some people to discharge student debt entirely, the creditors will adjust their practices to account for bankruptcy as a risk.

Underlying problem: Its a legal requirement that loans must be given to people who are not credit-worthy. This creates the greater risk of bankruptcy, further provoking the government to enact bad social policy (no bankruptcy on student debt) to cover up bad economic policy (legally required loans for children).

Oh, by the way, simply forgiving a bunch of loans is just stacking yet another level of bad policy on top of the other bad policies, because then you’re suddenly introducing new risks that the creditors are legally disallowed from accounting for, which leads from economic dysfunction to outright insolvency.

The right has warped principles about responsibility, which won’t let them consider any kind of mercy and/or practical solution to the problem because of the perception that some might get ahead.

The left is using this to push socialism and consolidate power. Regardless of how much they talk about helping people, they never actually will; they won’t work themselves out of a job.

How’s this for a concept: WORK YOUR WAY THROUGH COLLEGE. I did.

When did you work your way through college?

There is nothing warped about personal responsibility. Millions of us engage in it every day. I took an alternate path to education. I chose to gain knowledge through experience rather than a book. Today, I want to move into a VP role so I’m now going to college while I work and I’m paying cash. Now explain to me, why the HELL should I have to kick out tax dollars to pay for the college and living expenses of someone else that chose to borrow $100,000 to attend school because our government made loans easy. I’d LOVE to hear why I have to pay for my college AND the college of others. (Oh, I’m paying cash for my daughter to go to school too because I make too much money for her to get even a DIME in aid)

When I was in my 30s, and had many miles & life lessons behind me. Piece of cake; but I only went for my own head, since I was already a well paid pipe fitter. Logic, history, philosophically, writing.

That’s lovely - but I don’t know how old you are and thus have no idea when you went to college in your 30s.

Hows this sound; if you don’t pay your student loan, we will call WE BREAK KNEES R US.

I’m doing it today. I work about 60 hours a week and I’m going to school because my competition at work for the next VP slot all have degrees and I don’t want it to be an easy decision for my boss. On paper, that’s pretty much the only difference between the three of us as we all have 20+ years of experience and are all highly regarded within the company so it’s an easy fix for me. Get the damn piece of paper.

Cool - I did the same for my Masters as I had the salary to cover the expenses. Those are micro-level one-off examples (cost of doing business) that don’t address the larger issue.

That I would have no issue with. I just completely reject the idea that we should be forgiving those loans since millions worked their way through school and others paid their debt. If these loans were simple interest loans to begin with, there would be less loans available and less people getting useless degrees. The cost of college going up is a direct effect of these loans. Basic supply and demand.

Thanks - I think it is actually a reasonable and workable solution and I am not sure why it is not being discussed by anyone.

That’s a culture change issue. I don’t have any solutions to offer up there. That’s why I think in the near-term sticking to an honest interest rate adjustment is the best way forward. It will take generations to undo the cultural mess we find ourselves in. The debt bubble pop will take a decade or less at this rate.

Who would be able to siphon money off the top of you implement that approach? No one. It won’t be considered because no one can get rich from it, but we should be pushing our elected officials to start pushing it. Not enough regular citizens get involved. There is no lobbyist pushing it and promising contributions.