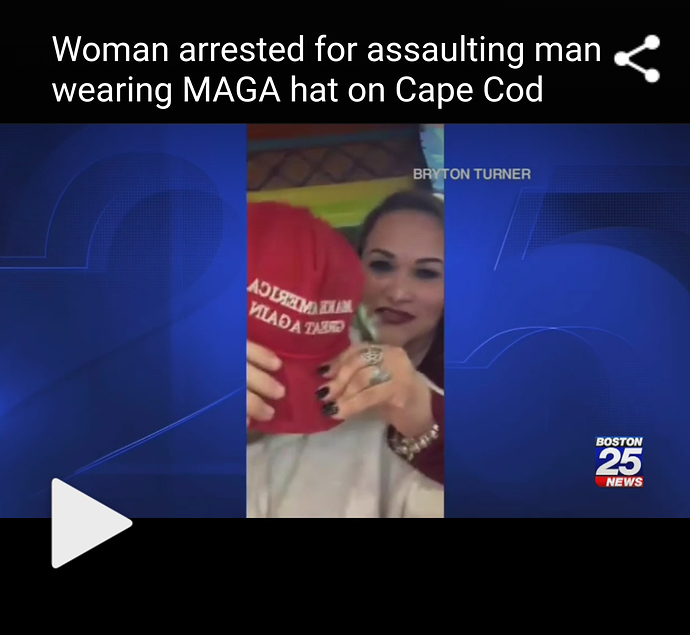 Rosiane Santos, 41, of Falmouth was charged with disorderly conduct and assault and battery.

Santos told police she was upset the man was wearing the hat in a Mexican restaurant.

The man wearing the hat, 23-year-old Bryton Turner of Mashpee, was so annoyed with the woman’s antics that he pulled out his phone and started recording her.

The incident occurred last Friday at the “Casa Vallarta” Mexican restaurant in Falmouth.

Turner says he was minding his own business, when Santos started yelling at him because of his hat, which bears the theme that President Donald Trump campaigned on.

The woman is seen walking behind him and hitting his hat off his head.

When asked if Turner did anything to provoke Santos, bartender Geo Macarao said, “No, no he just walked in and ordered his food.”

When police showed up to the restaurant, the woman told them the man shouldn’t be allowed to eat in a Mexican restaurant. President Donald Trump is aiming to build a wall on the U.S.-Mexico border.

As Falmouth police officers were escorting Santos out of the restaurant, Macarao said she took another swipe at Turner.

“I couldn’t imagine somebody just coming up and hitting them when there’s cops right here,” Macarao said.

“She just tried to grab my hat in front of four officers, not smart,” Turner said.

Santos, a Brazilian immigrant, said while she regrets her actions, she claims she was provoked.

“I had a little bit to drink maybe that’s the reason that I couldn’t walk away but being discriminated for so many times in my life, I just had to stand up for myself," she said. "He’s not a victim. I am the victim. I have been bullied, OK?” 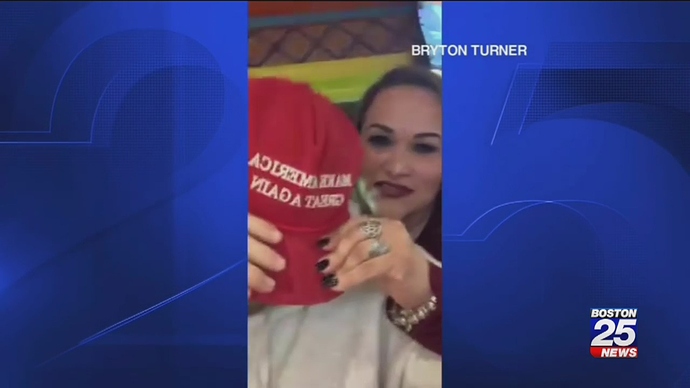 A woman on Cape Cod is facing charges for assaulting a man wearing a "Make America Great Again" hat.

The hispanic woman cries out as she strikes you.

Seems like a hate crime to me. Maybe this Brazilian ‘immigrant’ should learn that here in the United States we can wear what we want to without fear of being assaulted.

So I guess you can be sitting in a bar, minding your own business, and if a Brazilian immigrant to the USA sees your MAGA cap, instead of agreeing she came to the greatest nation on earth, she feels you are victimizing her and that’s all the justification she needs to assault you right in front of the police.

One of the reasons immigration needs regulated.

I wonder why Santos wants to come to the US? To use her pudgy frame to make an ass out of herself?

I can’t wait for all the voters that have been insulted and demeaned by the media to roll out the vote and give President Trump 4 more years.

This immigrant should lose any right to citizenship and be deported forthwith.

The left’s indoctrination is effective on weak minds.

She obviously does not have a clue as to the freedom and responsibility of all citizens to act like adults.

She is from a shithole country,

I can’t wait for all the voters that have been insulted and demeaned by the media to roll out the vote and give President Trump 4 more years.

It will be great!

The article did not say that she is a legal immigrant.

In either case, I agree with you.

Which is always curious. Usually a legal status immigrant makes sure that the legal part is included.

and the left says they are not the violent ones?

ICE has her now. She was an illegal.

You can’t write stuff this funny. I’ll be sure to tell her Hi next time I go to Brazil and remind her that I get to come back to the US.

ICE has her now. She was an illegal.

This is Karma at its best, bye bye bitch, but I’m sure she will be back because well sneaking into the U.S.A is an art form and skill, because we have no wall ( yet)

Just read… she simply has a date with an immigration judge now. I wonder if she will show up. What a fucking ingrate.

I wonder if they were kick her out or will she claim asylum?

She is presently in ICE custody and has been entered into removal proceedings before the federal immigration courts."

Did you read the article you posted? She is in ICE custody