A Venezuelan Navy vessel opened fire on a German cruise ship but sank after it sustained “severe damages” while ramming the luxury liner on Monday morning.

The RCGS Resolute , a 123-meter-long cruise ship equipped for polar expeditions, was performing routine maintenance in international waters off the coast of Venezuela on Monday morning, according to a statement by Columbia Cruise Services, which manages the ship. Soon, a Venezuelan patrol boat approached, demanding that the ship divert its course to a Venezuelan port. The patrol boat then opened fire on the Resolute and repeatedly rammed it.

The Resolute has a reinforced hull built to survive in arctic conditions and sustained only “minor damages” in the encounter. The same could not be said for its aggressor.

“While the RCGS RESOLUTE sustained minor damages, not affecting [the] vessel’s seaworthiness, it occurs that the navy vessel suffered severe damages while making contact with the ice-strengthened bulbous bow of the ice-class expedition cruise vessel RCGS RESOLUTE and started to take water,” the statement read.

The Resolute repeatedly offered help to its crew, but the Venezuelan sailors did not answer the Resolute ‘s hails, according to the statement. The cruise ship ultimately left the area after an international maritime authority told the Resolute that its assistance was not necessary. The ship soon safely docked at its intended destination of Curaçao.

The Venezuelan government acknowledged the naval encounter but claimed the Resolute was in Venezuelan territorial waters during the incident. CNN reported the country’s defense ministry suggested that the Resolute carried foreign mercenaries trying to invade Venezuela.

A search and rescue operation rescued all men aboard the patrol boat, according to the Venezuelan government. 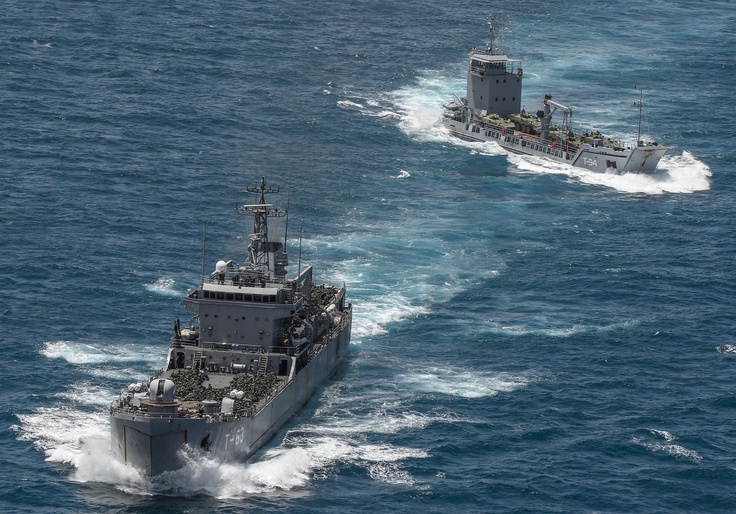 A Venezuelan Navy vessel opened fire on a German cruise ship but sank after it sustained "severe damages" while ramming the luxury liner on Monday morning.

Honestly, that is pretty funny but also rather sad at the same time.

You try to beat me up, you get hurt, I offer to help you and you limp off with your tail between your legs still trying to maintain some semblance of dignity. Except there was no dignity to be had no matter how they try to slice it.

But why is Venezuela trying to start trouble amidst the Wu Flu pandemics?

This version is even better

Now, most times civilian ships get close enough to slapfight a military destroyer things go about the way they did when that Los Angeles -class submarine ballknocked a Japanese fishing vessel , but the RCSG Resolute is a bit more intense than your typical deep-sea trawler. Built in Finland in 1993, Resolute is about 123 meters long (400 feet) and displaces over 8,300 tons, and is designed to carry 146 passengers on tours through the treacherous ice floes of Antarctica and the Arctic Ocean. She also had her fair share of problems, especially with the law – in August of 2019, I shit you not, the ship was arrested while in port in Nova Scotia.

That is a very good question, but just so you know, the US currently has ongoing operations due to the recent announcement of the anti drug Cartel task force aimed to stop illegal immigration. The broader strategy is actually aimed at CCP who has used the drug cartels to import their Fentanyl in the US over the southern border.

What, did the cruise ship fire back?

Venezuela has no food; the crew was probably delirious from hunger.

Resolute’s bow is cool for two reasons. Firstly, it’s official icebreaker rating from the Finnish-Swedish Maritime Administration is “1A Super”, and every time I read that classification I read it as though it is being yelled in a Swedish accent with five exclamation points. And, second, literally every story about this that I could find refers to the front of Resolute as a “bulbous prow,” which, maybe that’s an official nautical term or something, but all I can think is that is sounds like a slang phrase a Brit would use to refer to his dong.

I guess the sub captain didn’t have a book of identifying ships on board.

Great point, but it wasn’t a sub…it was a surface vessel…

Given its registration, they probably had no idea for what purpose it was built.

Thanks for your correction .

Desperation. If they have a bad outbreak of WuFlu it will pretty well guarantee the Maduro Regime finally collapses.

Doubtful. Lots of supply vessels and cruise ships bound for the Antarctic Ocean run up and down that coast regularly, particularly during their summer season.

They could also easily identify the ship at long range and run it’s registration.