Usual suspects in Washington planning a dirty bomb in Ukraine

This evil plan must be stopped For our Russian speakers Most likely scenario: The usual suspects in Washington make Zelensky explode a dirty bomb in Nikolaev (in Ukrainian Mykolaiv), which is being evacuated, blame it on Russia and use the media to spin this narrative throughout the world, which would justify the deployment of the 101st Airborne to occupy Odessa.

Direct confrontation between the US and Russia in southern Ukraine will certainly cancel the Nov. 8 elections.

This is absolutely disgusting 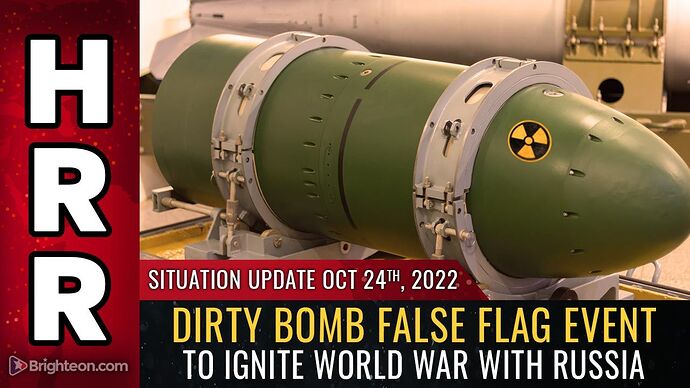 Not saying that Democrats aren’t capable of doing anything to retain power is to be naive and forget historical examples.
*GULF OF TONKIN
*SINKING OF LUSITANIA
*ROOSEVELT’S COLLUSION WITH BRITAIN

Democratic policies are the forerunners of war. Democratic Presidents like Jeff Davis (CSA), Woodrow Wilson, FDR, Harry Truman. JFK/LBJ are examples of the instigators of warfare.
You may remember Jeff Davis referring to slavery as “our peculiar institution”. I think the Democratic party is the real PECULIAR INSTITUTION!

I did a little research on Pearl Harbor.
Yep, Roosevelt knew.

Not only that, he actively hid the information that the Japanese were coming. Prior to all that, he even sold petroleum to the Japanese from California just enough for the Imperial Army to conduct a war for 2 years.

Roosevelt is Dutch for “Rosenfeld,” a name common among certain ethnicity.

It was Russia that went to the UN to bring attention to this issue, and now the Western states are decrying that it is Russia that is to blame. They are projecting!

If I may quote Quickdraw McGraw,"Hold on there. Baba Looey!!!"Surely you are not insinuating that the Russian Collusion Scandal was a smoke screen to cover real Collusion between the Biden Crime Family and “Russia Lite” , Ukraine??? Sort of a Deep State Double Cross. With America in the role of “Patsy” and Hunter rakeing in the rubles with The Big Guy