It’s not what you think. This is REAL terrorism.
https://pjmedia.com/culture/robert-spencer/2021/10/21/uc-berkeley-students-happily-pledge-money-to-help-the-taliban-kill-americans-inside-the-u-s-n1525684?fbclid=IwAR2Ie3OUUKWnP4E1gtnO4NeNJF6NHsECn7uTk4uXi1LiNtaCPFDzF-tvBVo 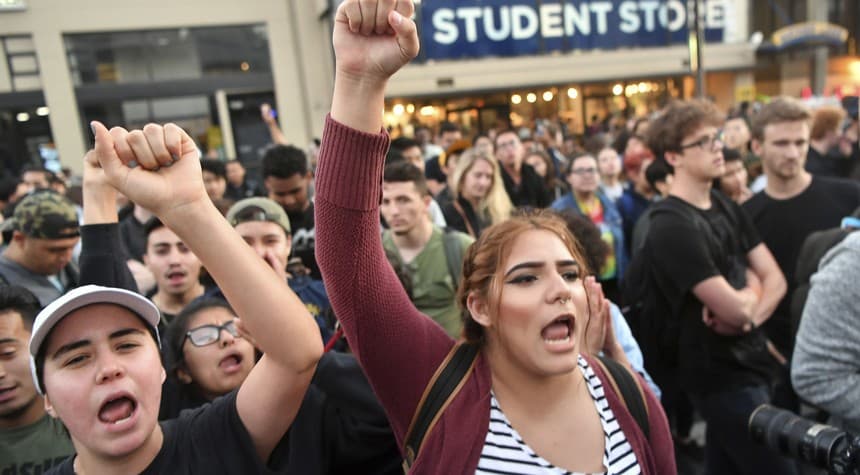 Anyone who may still be skeptical about the assertion that today’s college students are taught to hate America should take three minutes to watch this video from filmmaker Ami Horowitz, in which he asks students at the University of California, Berkeley to pledge money to the Taliban so that the jihad terror group can strike inside the United States and kill Americans.
“We’re trying to raise money for the Taliban,” Horowitz tells student passersby, and as if that wasn’t hard enough in itself to believe, he piles on more absurdities: “Tax deductible. I mean, if you earn money in Afghanistan, so that’s probably less helpful to you guys.” Horowitz explains to one man: “We’re Taliban 2.0. We’re kinder, gentler. Not really, but okay. You know, it’s our, it’s the way, it’s the way we roll.”

Horowitz knows just what to say to move woke Berkeley students to open their wallets: “Before America got there, we used it as a base to strike against America. We want to do that again….We got to fight back, you know? And America’s destroying the world, and we want to secure it for striking against the American homeland.” He tells another student: “So we want to be able to create a bulwark against America in Afghanistan, to fund and help its enemies around the world strike back against American interests, both abroad and in the homeland.” And: “Basically we want to create a safe space for enemies of the United States….9/11 was a lesson, but this is, they didn’t learn their lesson from 9/11. We want them to do that again like we did it in 2001.”

There’s no way I could make any of this up.

Liberal trash that never had the balls to actually fight anyone - Find your safe place ASSWIPES !!!

Whst a waste of tuition money on these students. Their parents maybe as bad or worse sending them to this anarchist institution of so called highrr learning, depriving a student that will study hard and avoid these idiots.

Not just the students, most of the UC Berkeley Professors are full-on Marxists.

These students should have a" field trip" to see how theTaliban operate.