The highest inflation in decades, millions out of work, talks about price controls, and empty grocery store shelves equate to BEST ECONOMY EVER LOOK AT BIDEN!

This article is a total load of shit and anyone who believes this crap is beyond redemption.

The U.S. economy grew last year at the fastest pace since Ronald Reagan’s presidency, bouncing back with resilience from 2020’s brief but devastating coronavirus recession.

The nation’s gross domestic product — its total output of goods and services — expanded 5.7% in 2021. It was the strongest calendar-year growth since a 7.2% surge in 1984 after a previous recession. The economy ended the year by growing at an unexpectedly brisk 6.9% annual pace from October through December as businesses replenished their inventories, the Commerce Department reported Thursday.

“It just goes to show that the U.S. economy has learned to adapt to the new variants and continues to produce,’’ said Beth Ann Bovino, chief economist at Standard & Poor’s Global Ratings.

Squeezed by inflation and still gripped by coronavirus caseloads, the economy is expected to slow this year. Many economists have been downgrading their forecasts for the current January-March quarter, reflecting the effects of the Omicron variant. And for all of 2022, the International Monetary Fund has forecast that the the nation’s GDP growth will slow to 4%.

Many U.S. businesses, especially restaurants, bars, hotels and entertainment venues, remain under pressure from the Omicron variant , which has kept millions of people hunkered down at home to avoid crowds. Consumer spending, the primary driver of the economy, may be further held back this year by the loss of government aid to households, which nurtured activity in 2020 and 2021 but has mostly expired.

What’s more, the Federal Reserve made clear Wednesday that it plans to raise interest rates multiple times this year to battle the hottest inflation in nearly four decades. Those rate increases will make borrowing more expensive and perhaps slow the economy this year.

Growth last year was driven up by a 7.9% surge in consumer spending and a 9.5% increase in private investment.

For the final three months of 2021, consumer spending rose at a more muted 3.3% annual pace. But private investment rocketed 32% higher, boosted by a surge in business inventories as companies stocked up to meet higher customer demand. Rising inventories, in fact, accounted for 71% of the fourth-quarter growth.

“The upside surprise came largely from a surge in inventories, and the details aren’t as strong as the headline would suggest,’’ Kathy Bostjancic, Oxford Economics’ chief U.S. financial economist, said in a research note.

In a statement, President Biden said, “We are finally building an American economy for the 21st century, with the fastest economic growth in nearly four decades, along with the greatest year of job growth in American history."

Arising from the 2020 pandemic recession, a healthy rebound had been expected for 2021. GDP had shrunk 3.4% in 2020, the steepest full-year drop since an 11.6% plunge in 1946, when the nation was demobilizing after World War II. The eruption of COVID-19 in March 2020 had led authorities to order lockdowns and businesses to abruptly shut down or reduce hours. Employers slashed a staggering 22 million jobs. The economy sank into a deep recession.

But super-low interest rates, huge infusions of government aid — including $1,400 checks to most households — and, eventually, the widespread rollout of vaccines revived the economy. Many consumers regained the confidence and financial wherewithal to go out and spend again.

The resurgence in demand was so robust, in fact, that it caught businesses off guard. Many struggled to acquire enough supplies and workers to meet a swift increase in customer orders. With many people now working remotely, shortages became especially acute for goods ordered for homes, from appliances to sporting goods to electronic equipment. And with computer chips in especially short supply, auto dealers were left desperately short of vehicles.

Factories, ports and freight yards were overwhelmed, and supply chains became ensnarled . Inflation began to accelerate. Over the past 12 months, consumer prices soared 7% — the fastest year-over-year inflation since 1982. Food, energy and auto were among the sectorswhose prices soared the most.

Late last year, the economy began to show signs of fatigue. Retail sales, for instance, fell 1.9% in December. And manufacturing slowed in December to its lowest level in 11 months, according to the Institute for Supply Management’s manufacturing index. The U.S. economy grew 5.7% last year, the fastest pace since 1984, bouncing back from 2020′s brief but devastating coronavirus recession.

This article is so jacked up I don’t even know where to begin.

If the Fed prints more and more paper money, does it indicate healthy economic growth? I don’t think so.

Oh, so you mean you will only accept positive economic news so long as your particular party is in the White House?

No! Only when its actually based on facts, so stop with your tiresome partisan bullshit!

The fourth quarter result was an increase of 6.9 percent over the prior quarter.

The total U.S. economy is now estimated around $23 trillion annually.

Because we are in a severe inflationary cycle, the resulting evaluations of the economy are skewed. The BEA attempts to remove the inflationary impact of their evaluations, but they do so by using a 5.5% inflationary rate, which is a much lower inflation estimate than actually exists.

Did our economy expand at 6.9% in the fourth quarter? Or are we just seeing the increased valuation of goods and services, while the actual outputs in the economy are shrinking?

I think we all know the answer to those questions. 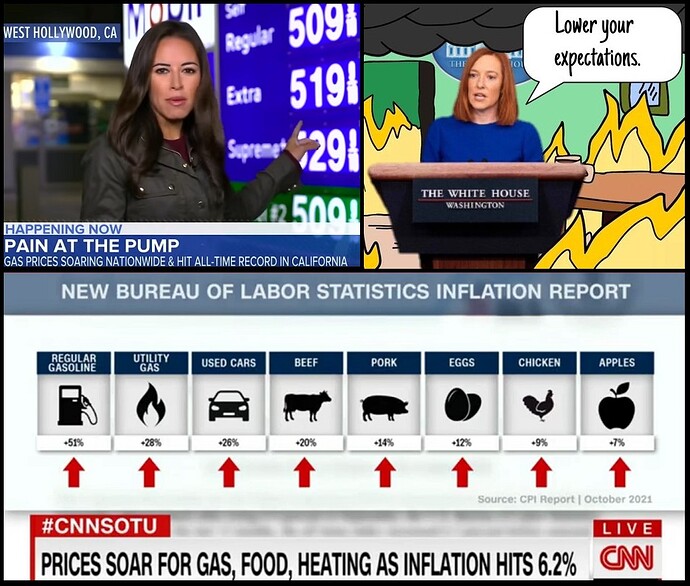 In dem cities looting and shoplifting is way up , that’s positive economic news .

A blind man in the Caribbean could have Grew the economy just by allowing businesses told to close to reopen.

yes it is . Lets look at this. Since the pandemic hit 20 million Americanns losyt thier jobs, or quit because it was an ecuse not to work, NOW after months of free stuff few will go back to work, If the free money has run outpeople stay at home and work if they can, work 32 hours a week pay is between min, wage and $15 an hour and they are called new hires , Wow what a fake labor replort now Inflation, I am an Operations Manager of a Company that supplies Cusomers like John Deere, manufactured parts my Salary is like $65,000 a year. If I miss 1 delivery of my product at Deere they cancel the po and have China make the part, ME Morgue on my $285,000 House, car payments for my most car to get to work, Family of 4 cost $1,500 a month for groceries. Car fuel heat my house, medical monthly bills School cost for the kids, both work, Grandparents watch the kids after school, The monthly bills are $5,000 a month. $65,000 a year my wife makes, $30,000 a year before taxes so 100 thousand a year and I am broke no savings so tell me how great pervert Joe Bidens economy is As business person inflation is the result of what I am talking about supply un able to meet demand, Because People do not work and stay at home and do nothing but wait for Goverment Handouts, Look at the lies about Covid 19 worst now than ever. America is sick of the lies of the Biden administration, I mean Pervert Joe Biden, How Kamala Harris and drunk Nancy Pelosi so picks to prove it. Trump was not perfect but enough of this idiot Biden with his own parties Daughter
email me at jziegelbauer@charter.net for the rest ofthe ics, only can put 1 here
kamala after blowing Chuck Schumer
Lets go Brandon to all