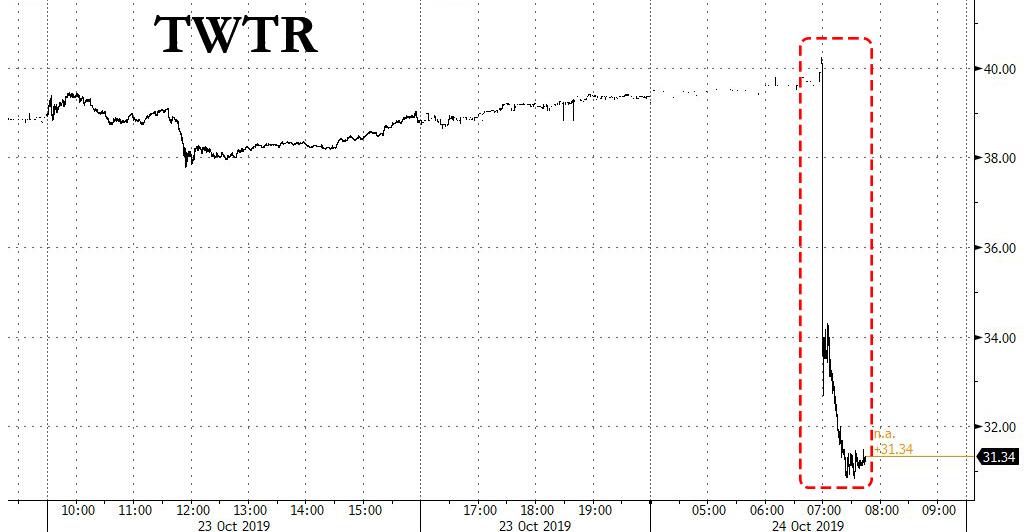 Twitter shares are crashing in the premarket after Trump’s favorite social network not only missed third-quarter revenue expectations but missed Q4 revenue expectations “bigly.” With the social media company expecting headwinds from revenue product issues, such as advertising issues and product bugs to significantly weigh on overall performance through year-end, and as a resulted, Twitter now sees 4Q revenue of only $940 million to $1.01 billion, far below the consensus estimate $1.06 billion.

But it was the company’s guidance that opened a trapdoor below the company as Twitter now expects Q4 numbers that were simply dismal and it now appears that even with President Trump tweeting at a record pace this year, Twitter still can’t get its business model right: 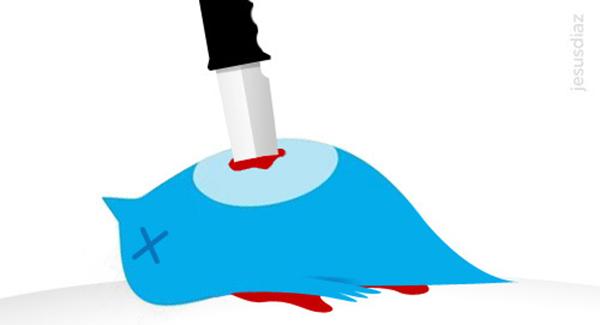 Even with President Trump tweeting at a record pace this year, Twitter still can't get its business model right.

Great, does this mean that Twitter will fail and the world will no longer be subjected to Trump’s obnoxious hourly barrage…

Trump’s tweets are the only thing keeping Twitter alive. It’s why they won’t ban or silence him.

Well looking at the op it’s not working out…

Again, if it gets rid of Trump…

Of course, he has used it to self incriminate for three years, so there’s that.

I for one hope that Trump keeps tweeting, it shows the entire world just what an idiot and small person that he really is.

Well, like I pointed out, he does self incriminate, on record with it.

So where are the charges?

Well, we’re awaiting them from the ongoing inquiry. Previously, Mueller’s report outlined ten examples of obstruction of justice, but there were no charges due to a stupid DOJ policy that is reticent to charging sitting presidents. So, the political route that is in process.

You know if he went and started using and supporting another platform that would be a boon for them! Guess that would send Twatter circling the drain if that were to happen! Just saying, one decision from Trump and the company would be toast!

Well, we’re awaiting them from the ongoing inquiry. Previously, Mueller’s report outlined ten examples of obstruction of justice, but there were no charges due to a stupid DOJ policy that is reticent to charging sitting presidents. So, the political route that is in process.

You guys seem to gloat a lot over American business enterprises doing poorly or failing. An odd bunch you are and a strange approach for making America great again…

You put that perfectly! It’s really weird that all of these free market capitalists want to see some of America’s largest and most influential tech companies go down in flames. To me it just proves that they are only principled about things when it is convenient and in alliance with their political views.

Right, and not only tech companies, but other American institutions like the NFL and now the NBA, and even more concerning the FBI and other intelligence agencies.

Also, in another thread, they are gloating over a perceived sleight by Zuckerberg towards AOC. Normally they can’t stand him.

Which all can be summarized as…things that Trump doesn’t like.

Easy for you to say. People that look like you and who have you political are free to say whatever you want on Twitter. People like me get silenced, banned, or our have lives and careers ruined by people like you.

Don’t be a racist and don’t spew hate speech and you wont have to worry about any of those things.

Do you notice the parroting of NPC meme in action or of MSM programming of low info?