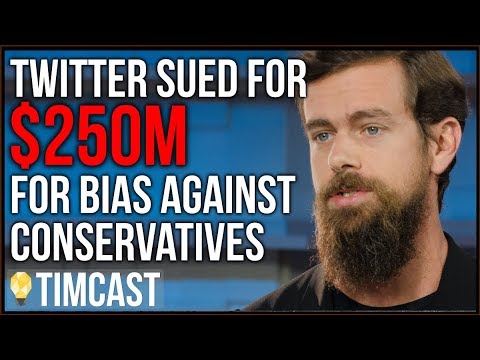 I told Jack Dorsey lawmakers would be coming for them and here we are only a few weeks later. Devin Nunes has filed a 250 million dollar lawsuit against twitter over their bias against conservatives.

Nunes argues that Twitter is essential in American Democracy and they must uphold fair standards and stop shadow banning conservatives and republicans.

Twitter does seem to hold a bias against conservatives and in favor of left wing, far left, and intersectional feminist accounts having let many of the worst offenders off with a warning while suppressing people on the right.

In response to this we are now seeing a Florida Lawmaker push forth a bill to make it illegal for a social media giant to censor views based on subjective reasons.

The sooner TWITTER and FTM Jack Dorsey are DESTROYED the BETTER.

I agree witih Sargon’s opinion of Jack which is he actually does care but he also has investors that demand something in return. It is a balancing act and Jack can’t do everything or make a perfect system. It is a deeply flawed system and lots of demands are put on him but he tried to also keep his platform more free in many ways. But the politicians these days… my god they’re truly terrible.

They will try to settle out of the court. The key is to reject it and go for the jugular. It’s not a money thing. It’s a free speech thing!

Yeah that is a good point! I already posted this story earlier in a separate thread talking about this issue. Jack Dorsey is a pretty smart guy, and I am of the belief that he is under pressure from his investors as well, but who knows really. Anyway, I hope this lawsuit goes somewhere and forces changes. The same with Google and others. Politicians suck! They are worthless and can’t come up with solutions to solve problems, because it is obvious that the tech giants have too much power and it needs to change!

Rand Paul, has a pretty good idea and I hope that more support for it picks up steam to at least enter the main discussion in terms of solutions. We need a cyber bill of rights that will protect everyone, so that that the tech giants can’t influence free speech and other rights that are being infringed upon by them. Twattter is what I call them now!

Jack knew what he was doing and dug his own gave.

Somehow it will be blamed on the right though, and that’s fine by me.

This seems like more of Congress critter showboating for public consumption than a serious challenge. The lawer being used has filed and lost several of these types of actions. This will probably end up just like the Congressional hearings, a lot of BS and no real action.

If social media companies have to stop suppressing conservative speech before 2020, democrats won’t have a chance against Trump.

But a conspiracy of private infrastructure monopolies can shut down political speech and the government does nothing.

America is a epitome of a failed state

The core concept is now a hoax

Revenue from the ads should be compensation enough. Political gain for the socialist/Marxist/communist agenda should not be on the table.