I’ve been curious about Gabbard for a while because she’s unique in how directly her appeal is aimed at a nexus of far-right and far-left elements. She gets praise from white nationalists but also from anti-“establishment” progressive types, hewing to the pro-Russian line on US military engagement in Syria, etc.

There’s also something about her that just freaks me out. She seems malevolent in a very particular cult leader-ish kind of way.

I just came across this video in which she all but says that it wouldn’t be a real improvement to replace Trump with a mainstream Democrat, and it makes me wonder what she’s trying to do. She just has to know that nobody who says stuff like this will make it anywhere near the nomination, right? 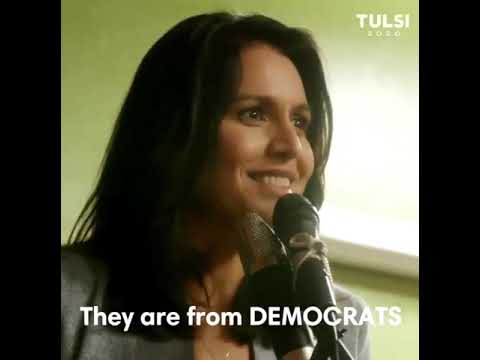 I don’t agree with her on much but she’s probably the most reasonable sounding democrat to declare for the race so far.

She seems to be the ONLY Democrat NOT eaten alive with Trump Derangement Syndrome.

I’ve seen her on with Tucker a couple of times. I wouldn’t vote for her but at least she isn’t a complete lunatic.

I assume she is promoted by Russia until shown otherwise. It’s the most parsimonious explanation.