So apparently, Tucker is trying to keep Trump from being retarded. Great. /ourtardwrangler/ 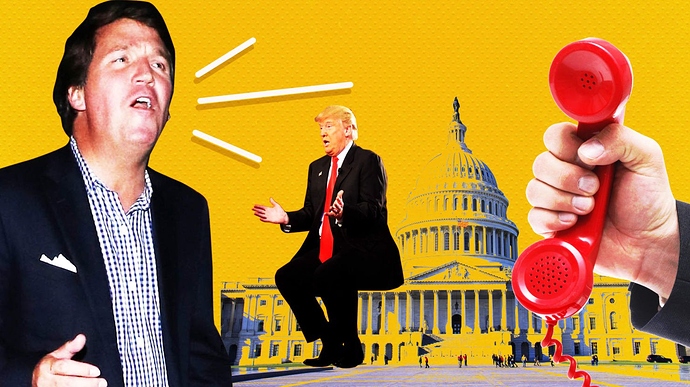 Tucker Carlson Tells Trump in Private: No War With Iran

As tensions with Iran escalate and his advisers clamor for a hawkish approach, the president has been taking foreign-policy advice from a Fox News host.

Tucker is trying to keep Trump from being retarded

Maybe you need someone to help you too.

Daily Beast: “Tucker Carlson is preventing WW3 and why thats a bad thing”

LOL, The Daily Beast. Only dopes read that website

This is great news. Tucker Carlson has been consistently against military adventurism in the Middle East. When there was a big push to go to war in Syria and in Venezuela, Tucker consistently pushed back and would ask guests and administration officials how going to war with benefit the average American.

This is great news, I’ll be the first (or third, maybe) person to admit that, however I always got the impression that what Trump actually does after speaking to many people largely depends upon who the very last person Trump had a conversation with directly prior to the time when he gives his public statement or makes his final decision on the matter in question… And in many if not most cases, that person is probably either Ivanka or Jared, not Tucker Carlson…

You really didnt mean to insult me… a Trump supporter, did you? I mean if I supported a retard, what does that make me?

Why does Trump hire Bolton and take private advice from Bolton’s anti-persona Tucker? One pro-Trump theory - remember when Trump first got elected and he couldn’t fill his cabinet due to the Senate blocking him? Maybe that’s still the case - Trump cannot place normal people in his cabinet because the Senate has the power to block him. So his only options are no cabinet position or try to control guys like Bolton.

A good leader seeks inputs from multiple sources. He then integrates the data in a way that a single source cannot.

Smart move on Trump’s part. Going to war with Iran would be so stupid. We weren’t attacked so no one really cares.

Yes war with Iran is stupid. But Trump has difficulty getting good people to work for him so he’s resorting to pundit opinion heads for foreign policy.

Yet not a shred of proof is govern making this a conspiracy theory.

I agree! Trump is basically showing that is at least willing to have an open mind to consider others ideas. Tucker Carlson is a pretty intelligent person and I am actually happy, if this report is true that he is listening to him. What this says about Trump is that he is not ruling by ideology but by common sense to build a consensus of what is right in order to make an informed decision, something we did not see from his predecessor.

What a load of bull as there is nothing private about how Tucker feels about war or military conflict, he publicly says it on show all the time! He is definitely a wimp in that regard.

So because Carlson isn’t pro war he’s a wimp?

I like Tucker and agree with him on most topics but he’s got a real blind pacifist weenie streak and no real understanding of just how important and complex the strategic equation is that is the ME.

What a load of bull as there is nothing private about how Tucker feels about war or military conflict, he publicly says it on show all the time! He is definitely a wimp in that regard.

So you want another US ME war. There’s a pattern here.

It isn’t about “wanting another war” it’s about recognizing reality and protecting our interests.