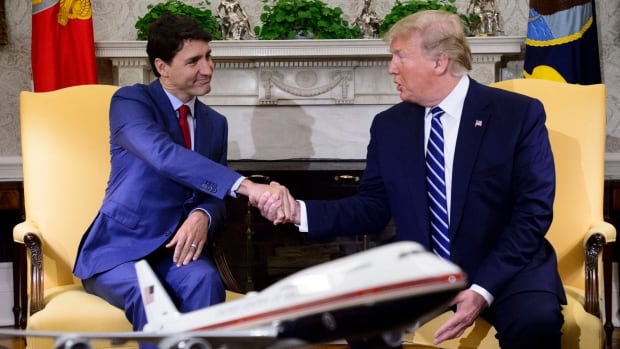 Trump pledges to do 'anything' he can to help Canada in its dispute with China...

A year after Canada and the United States seemed poised to descend into an all out trade war Prime Minister Justin Trudeau boasted that he had completed a successful trip to the U.S. in which both countries agreed to work together in a number of key...

This is CBC after all, is a protected status media that will say anything to save Trudeau! Trudeau is finished and so is Canada! China practically owns Canada and this is just window dressing to the larger issue of Hauwei and their still under house arrest CEO. That being said, and of course a lot can be said about Trudeau and how he really screwed Canadians over with his asinine policies and virtue signaling nonsense, the USMC is set to be sent to the house for congressional approval soon where basically if they don’t approve of the new agreement then the trade Treaty will revert back to the 1974 standard as was written in the original language in the MOU and it will be worse for China who will be more FK than they already are. In other words commerce Secretary Wilbur Ross is brilliant in how he set this up cornering Congress into a no win situation and at the same time giving the big middle finger to Tom Donahue of the COC, not to mention making Canada the US’s beotch at the same time!

Typical liberal puke, bad mouth someone endlessly , oppose everything they do and say , then cower for their help . Screw that phony fruit loop .