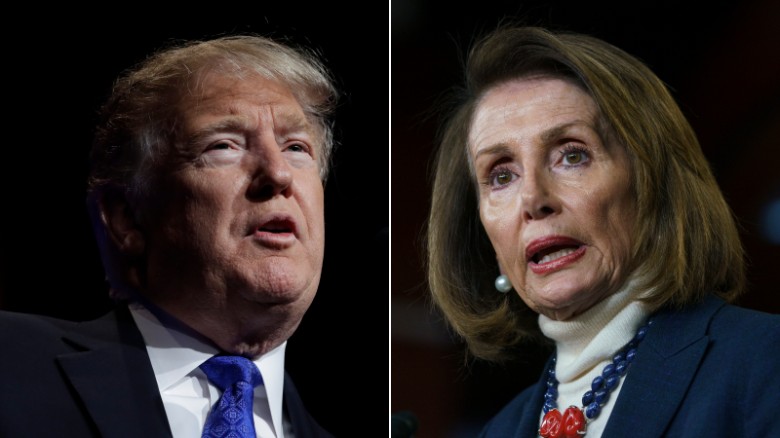 President Trump and congressional Democrats arrived at an agreement Friday to support a short-term spending bill to re-open the government, temporarily ending the partial government shutdown that has dragged on for 35 days, in a move to separate the controversial issue of border security from funding of the government.

From the White House Rose Garden Friday, the president announced that the administration and Congressional Republicans and Democrats had “reached a deal to end the shutdown and reopen the federal government. Trump said the deal would keep the government open for three weeks until Feb. 15. The measure passed the Senate on Friday afternoon on a voice vote. It is expected to pass the House of Representatives later Friday, and Trump is expected to sign it by Friday evening.

“I am very proud to announce we have reached a deal to end the shutdown and reopen the federal government,” he said to applause from gathered Cabinet members.

The government ran out of funding on Dec. 22, amid a border security debate between the White House and congressional Democrats. The president requested $5.7 billion in funding for border security and construction of a steel barrier or concrete wall along the U.S.-Mexico border, but Democrats vowed to block any spending package that included any sort of funding for the wall.

Trump, who just this week vowed that Republicans would not “cave” on his demands for funding for a wall on the Southern border, ultimately arrived at an agreement with Democrats to support a measure to re-open the government, and negotiate a plan for border security separately. The deal does not include funding for a wall or barrier along the border, but Trump said he was confident negotiations would continue to come to an agreement on wall funding.

Trump made reference to his previous threats to declare a national emergency to secure the border, calling it a “very powerful weapon," and noted that if no deal was reached to fund border security and construction of a wall before Feb. 15, the next date the government’s funding would run out, he would use his presidential powers to declare an emergency.

“Walls should not be controversial,” he said. “As commander-in-chief, my highest priority is the defense of our great country.”

He added: “We cannot surrender operational control over our nation’s borders to foreign cartels, traffickers and smugglers.”

Meanwhile, Senate Minority Leader Chuck Schumer, D-N.Y., said Friday in a joint press conference with House Speaker Nancy Pelosi, D-Calif., that the measure will pass in both the House and the Senate, and expects the president to sign the legislation late Friday.

“The solution to this impasse was to separate funding for the government and border security,” Schumer said on Capitol Hill Friday after the president’s announcement. “Democrats in the Senate and House were united on this position throughout the shutdown.”

Senate Majority Leader Mitch McConnell, R-Ky., said on the Senate floor that he supports the president’s plan to re-open the government and called on Democrats to come to the table and negotiate a border security plan before Feb. 15.

“Going forward, I hope Democrats will stay true to the commitment they have stated constantly over the past weeks – that once government was re-opened, they would be perfectly willing to negotiate in good faith on full-year government funding that would include a significant investment in urgently needed border security measures, including physical barriers," he said.

Later, Trump told reporters at the White House that he planned to “work with Democrats” on a border security package.

“If we can’t do that, then, obviously, we’ll do the emergency, because that’s what this is-- a national emergency,” Trump told reporters at the White House Friday afternoon.

The shutdown left more than 800,000 federal workers and contractors without pay. Some federal employees were deemed essential to government function and were forced to work without receiving paychecks. Other employees were furloughed, and also did not get paid.

Trump on Friday said back pay for federal employees would occur “very quickly,” but did not give a specific timeline.

“Recognizing the urgency of getting Federal employees paid quickly, the administration is taking steps to ensure that they receive pay as soon as possible,” a senior administration official told Fox News Friday. “Since specific payroll issues vary by agency, employees can find more information about paycheck details by reaching out to their agency.”

The government shutdown brought heated rhetoric and action on both sides of the aisle—with Trump canceling a Democratic congressional trip to Afghanistan after Pelosi called on him to delay his State of the Union address, slated for Jan. 29. Trump announced Thursday he would delay the address, but as the government is on track to re-open by the end of the day Friday, the annual address could take place next Tuesday as previously scheduled.

Over the weekend, though, Trump announced a compromise plan that funded the wall while extending protections for 700,000 illegal immigrants brought to the country as children under the Obama-era Deferred Action for Childhood Arrivals (DACA) program and 300,000 immigrants from countries designated unsafe to return.

But Democrats, who long argued protections for DACA recipients were critical, opposed Trump’s proposal. The Senate this week attempted to pass a measure with DACA protections included but failed to get the 60 votes needed to pass.

Why now? What changed? Why compromise now without a win?

The Shutdown was a “Show”. It may seem a little risky to hold back the pay of 800k people, but in the end the risk isn’t as high as it seems since they ultimately WILL get paid their backpay, and by “holding them hostage” it forces people to pay attention to the issue. What issue? One thing, and one thing only:

It’s not over. Getting government workers paid again releases the pressure value.

I have a simple question regarding the shutdown: If there are non-essential federal employees, why are they employed?

I’m honestly surprised that people don’t get this: if the dems know they just have to wait three weeks and he’ll fold, then even if he decides to shutdown again, he will have to keep things down for twice that long in order for them even to begin to take him seriously, He’s not going to do that. They beat him. Period.

This may be even worse than saying that he was going to release the files on these people, then refusing to do so.

The man has no capacity to break eggs. Disrespect people verbally, yeah – and ok, I appreciate that, but it’s not enough

He had the perfect opportunity to drain the swamp via furloughs (ie layoffs). He could have laid off tens of thousands of federal employees. People who give money to democrats, vote democrat, obstruct his policies, spy for democrats, and leak information. He can only do this after 30 days of shutdown. All those democrats just got a one month paid holiday.
Three weeks from now he will be right back in same boat, starting from scratch again. If he declares an emergency the courts will interfere (they might get shut down by SCOTUS), but with the traitor Roberts allowing RBG to vote by proxy, maybe not. Then what?

If he was serious, he would say right now, next government shutdown

Draining the swamp is more important then building the wall. Anyways we’ll see how it plays out, but I have my doubts.

Ending the shutdown with no compromise was a mistake. Now the wicked witch of San Francisco will think she runs the show.

He should have demanded some wall funding but just not all of it. I.e a compromise.

Trump should release a detailed plan - what is the money for? Which areas will receive wall? Will they use eminent domain to acquire the land? What will they pay for the land?

What will the wall look like? How long will it take?

Without details, this is all meaningless.

Who would give him 5B without knowing what he is planning to do with it?

He should have demanded some wall funding but just not all of it. I.e a compromise.

But last year, he didn’t spend all his border security money…what does he need these additional funds for? What is his specific plan?

I think he will have the upper hand. If the Dems don’t come to the table (they won’t) with anything then we will be back at square one - except this time it’s a national emergency - and all legal challenges / reviews are fast tracked directly to the SCOTUS.

People wonder why he waited so long to do this. He needed Kavanaugh on the court.

He’s giving them rope to hang themselves with. Pay attention! You’re missing it! Keep bitching and grousing, you’re missing the master in action…

Mitch told him he was losing the Senate. The next vote that came around, enough republican Senators would have turned to pass a bill. That would have been even more embarrassing than what Trump had to do today. He didn’t have much of a choice, I’m afraid.

Why now? What changed? Why compromise now without a win?

How long do we want to pay federal employees for NOT doing their job ? Make them collect unemployment like EVERY other worker in the USA How many factories closed their doors , how many workers were laid off in the last 15 years , no one cried the blues for them !!!

He plans to declare an emergency and deal with the wall that way BUT Obama appointed judges will hamper his every move along with the demoRATS and liberal anti-Trump media . Time for CNN to grandstand .

If it’s a national emergency, any judicial challenge goes directly and immediately to the Supreme Court.

That will be the question and the media and the dems have supplied their answer , so will this be more of the immigration ban of two years ago ???

I hear Trump might shut it down again in a few weeks, so really what did it accomplish?

I doubt it, if he does he’ll get the same result so why bother?