Trudeau Gets A Rebuffed Handshake

This is pretty funny! Trudeau is not only seated next to President Xi where tensions between the two countries is pretty intense, but sitting opposite of him is Jair Bolsonaro whose policies oppose each other so not a good place for Trudeau! Trudeau offers hand to shake with Bolsonaro and the look he gets and then what comes next is the total diss! Trudeau is not getting much respect these days! 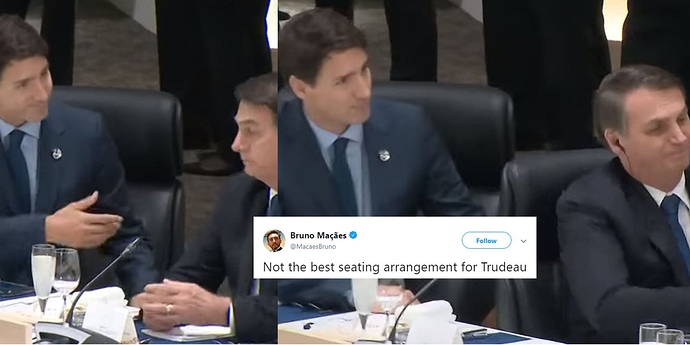 Justin Trudeau is regarded as one of the most likeable leaders in global politics right now but he found himself in no man's land on Saturday morning at the G20. Thanks to an awkward seating

The Canadian A-Hole is a liberal turd .

Here is a spot on comment beneath the article that tells the truth.

JRM
7 hours ago
Hi Folks, this video is being misreported. Watch closely as Trudeau “taps” Bolsonaro, “then gestures” for Bolsonaro to shake hands with the person next to him. There is no insult here at all. The reporter is making a huge mistake.

Reporters have a way of interpreting things as they wish they were.

FAKE NEWS, we call it!

I laughed my ass off when I saw this. Trudeau is the type of guy who always wants everyone to like him. Getting dissed hard like this is beyond ego crushing.

My bad! I should have checked the source! Have to get on Kane’s case over at CFP!

That’s now how I saw it at all. Trudeau got owned. Plain and simple.

It was funny nevertheless and not the first time this sort of thing happened to him especially after the stunt he pulled when they met in Canada the last time!

Watch the tape carefully and pay attention to all of the gestures made. It’s repeated in the video, likely to make you think it happened twice.

Not nearly as funny as when Obubba toasted the Queen during their National Anthem and nobody else lifted a glass. What a dickhead Obama is!

I don’t remember that! I have to find that!

I laughed my ass off when I saw this. Trudeau is the type of guy who always wants everyone to like him. Getting dissed hard like this is beyond ego crushing.

And we all know the other world leader who cannot abide being dissed - clue he is orange and crushes on his daughter.

You just couldn’t help yourself could you? That orange part is getting really old and you are in some desperate need of new material!

Its funny because its true.

Btw Obama has not been President for a few years and he still is called names on here - where are your complaints about that old material?

Funny to you maybe, but then again your posts are as unimaginative as your moniker which is probably suggestive you are just some over weight slob desperate for attention! “Toasted Cheese for disgusting fat bodies like you!

And let me guess you are a real doctor. For fucks sake grow up.

How about you practice what you preach? Can you actually post anything of value here? Huh? That would be a big fat no!

How ironic! Coming from a moron like you who regularly suffers from TDS by posting your snots here and telling me to grow up! Now that is some funny shit!