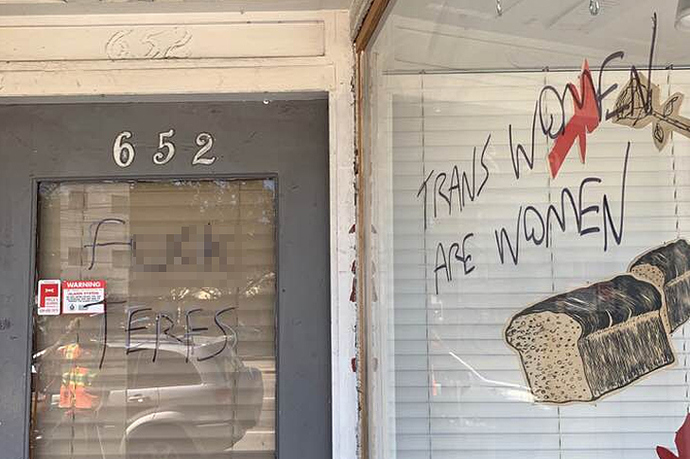 What kind of person would threaten and harass a rape crisis center? Here in Vancouver, we have the answer: trans activists. While it might sound odd to the uninitiated that those who claim to value ‘inclusivity’ and ‘acceptance’ would also be the same people who nail a dead rat to the door of a transition house for battered women, those of us following the gender identity debate closely are all too familiar with this type of occurrence.

A follow up to the dead rat that was nailed to our door recently… this morning we found this writing scrawled across the windows of our storefront space that we use for support and training groups #Misogynypic.twitter.com/vm6Gv8jWcj

Most trannies are male to female because, if you’re batshit crazy, it’s way easier to be a woman. Everybody expects that kind of shit from them.

If you’re a woman, you have to be LESS crazy to pass for a man. And that’s damned near impossible.

This is actually kind of brilliant. If the feminists accuse the trans people of misogyny, they can accuse them of transphobia. And last I heard, being trans is higher up the oppression totem pole.

What’s ironic is they all still hate Reagan for closing state run mental institutions. If he hadn’t all these activists would be locked up tight.

Gender dysphoria is the only mental disease that demands sane people submit to the delusion.

Men dressed up as women are keeping it classy as always

Transexual is not the same as Transgender.

This is actually kind of brilliant. If the feminists accuse the trans people of misogyny, they can accuse them of transphobia. And last I heard, being trans is higher up the oppression totem pole.

We need some HUAC style oppression for these Cultural Marxists…

President John F. Kennedy had a special interest in the issue of mental health because his sister, Rosemary, had incurred brain damage after being lobotomised at the age of 23.[60] His administration sponsored the successful passage of the Community Mental Health Act, one of the most important laws that led to deinstitutionalization. The movement continued to gain momentum during the Civil Rights Movement. The 1965 amendments to Social Security shifted about 50% of the mental health care costs from states to the federal government,[60] motivating state governments to promote deinstitutionalization. The 1970s saw the founding of several advocacy groups, including Liberation of Mental Patients, Project Release, Insane Liberation Front, and the National Alliance on Mental Illness (NAMI).[60]

The lawsuits these activist groups filed led to some key court rulings in the 1970s that increased the rights of patients. In 1973, a federal district court ruled in Souder v. Brennan that whenever patients in mental health institutions performed activity that conferred an economic benefit to an institution, they had to be considered employees and paid the minimum wage required by the Fair Labor Standards Act of 1938. Following this ruling, institutional peonage was outlawed. In the 1975 ruling O’Connor v. Donaldson , the U.S. Supreme Court restricted the rights of states to incarcerate someone who was not violent. This was followed up with the 1978 ruling Addington v. Texas , further restricting states from confining anyone involuntarily for mental illness. In 1975, the United States Court of Appeals for the First Circuit ruled in favour of the Mental Patient’s Liberation Front in Rogers v. Okin ,[60] establishing the right of a patient to refuse treatment. Later reforms included the Mental Health Parity Act, which required health insurers to give mental health patients equal coverage.