A pretty illuminating interview that explains why Bobulinski came out publicly to renounce Joe Biden and the absurdity of the "Russia, Russia Russia " false narratives. I don’t watch TV all the time like you do, so you tell me.

If Tucker Carlson ever mentions Hunter’s laptop, I will retract my statement that Fox is another controlled opposition.

I didn’t see your post.
Is Hunter’s laptop mentioned there?

If Tucker Carlson ever mentions Hunter’s laptop, I will retract my statement that Fox is another controlled opposition.

You can quote me in anywhere or anytime here that I said Fox News is not controlled opposition.

I did answer your question, when you aren’t getting your prescriptions filled, reread my question to you and think about it for awhile before answering.

No he did not mention it. I guess Tucker thought this is a much stronger case of Biden corruption than Hunter’s personal laptop.

reread my question to you

Never mind, clearly you don’t understand or differentiate what is rhetorical in nature.

The interview was chilling. Pray for this patriots safely and that of his family. The corruptions of the Biden-Obama cabal run so deep it’s hard to keep track.

Joe Biden casually runs an extortion industry and is the most internationally compromised person that ever reached this level.

Talk about the Peter Principle, Joe is chapter one.

No he did not mention it. I guess Tucker thought this is a much stronger case of Biden corruption than Hunter’s personal laptop.

Perhaps it has to do with slow Joe running and Hunter NOT . 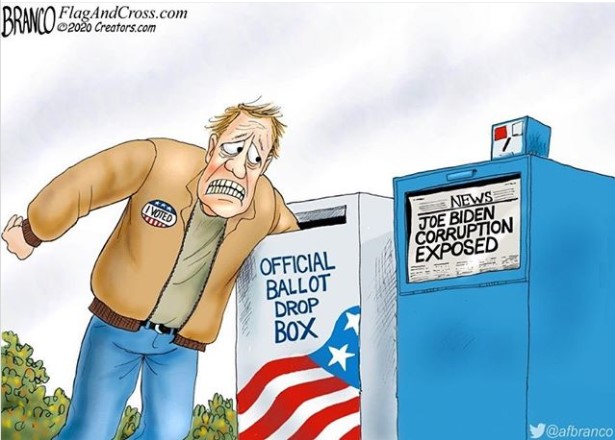 This news (about Joe’s corruption and Hunter’s behavior) should have come much earlier!

Additionally, Joe obviously molested his own daughter. What a messed up family.

And mentally disturbed people want this family to be America’s first family?

This news (about Joe’s corruption and Hunter’s behavior) should have come much earlier!

They should have been dripping it out the minute Biden got the nod from the DNC.

More curiously though…. Mr. Bobulinski has the receipts; actual evidence of how businesses were set up to funnel the bribes, scheme and graft payments into the Biden family. According to the details he laid out Bobulinski was recruited to help set-up and facilitate the influence peddling program.

The described network is a smaller, start-up version of the Clinton Global Initiative; but essentially the intents and purposes were the same.

As Bobulinski detailed the engagements, one of the more glaring aspects was how easily the U.S. intelligence and law enforcement apparatus could monitor everything that was happening. Many of the meetings were with foreign officials outside the U.S; and many of the structural parts of the network were assembled in locations easily infiltrated by the U.S. intelligence apparatus.

It makes perfect sense why the DOJ or the intelligence apparatus have done nothing! They are in on the “take!”

On Tucker tonight be said all the proof is gone? For real? He’s been going off about this from weeks and now all the proof has gone poof.