Tlaib to Pelosi: 'Acknowledge the Fact That We Are Deeply Racist Women of Color Who Hate America'

Ayy yo hol up! Aren’t you in a middle of a temper tantrum hissy fit because Trump did this very thing?!?!

Ocasio-Cortez said she would “absolutely” meet with her, with Tlaib offering Pelosi pointers on how to deal with her and her colleagues Ocasio-Cortez and Reps. Ayanna Pressley (D-MA) and Ilhan Omar (D-MN).

“She has every right to sit down with her in any moment, in any time, with any of us,” Tlaib said. “She is speaker of the House. She can ask for a meeting to sit down with us for clarification. Acknowledge the fact that we are women of color, so when you do single us out, be aware of that and what you’re doing, especially because some of us are getting death threats, because some of us are being singled out in many ways because of our backgrounds, because of our experiences and so forth.” 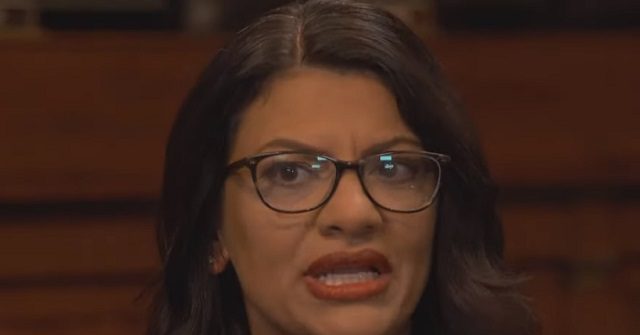 Tlaib to Pelosi: 'Acknowledge the Fact That We Are Women of Color -- So When...

During an interview with "CBS This Morning" co-host Gayle King, Reps. Alexia Ocasio-Cortez (D-NY) and Rashida Tlaib (D-MI) spoke about their relationship | Clips

They’ve singled themselves out and now complain when they are treated equally in the political arena - if they can’t take the heat of political life, they shouldn’t be there. They serve anti-American interests and do not represent American values - they have to take responsibility for the radical political positions that they have taken.

they went back to civil war again in less than a day.

MLK said he wanted coming generations to be judged by their character rather than the color of their skins.

These “women of color” want to hide behind their skin and their lady bits, even among other progressives, and to judge everyone else by the color of their skins and presumably genitalia as well … at least unless they disagree with biology and say they’re something else (can’t be seen as TERFs).

Nancy is basically a Menshevik.

These Justice Democrats are Bolsheviks.

She can ask for a meeting to sit down with us for clarification. Acknowledge the fact that we are women of color

That is the cringiest bunch of garbage I think I’ve ever read. these people are absolutely incapable of conducting business like normal civilized human beings. They should go back to the third world where they belong.

Acknowledge the fact that we are women of color, so when you do single us out, be aware of that and what you’re doing

Too bad for them ol’ Nancy has a few tricks up her sleeve. She hasn’t survived in politics this long because she isn’t even a fraction as stupid as they are.

What I take absolute joy in, however, is that Trump threw a wrench in their propaganda machine. The moral high ground they seem to think they own got jerked out from underneath them. They are now fighting each other and making asses of themselves for all of the world to see.

So its extortion… don’t criticize or speak against us or else, because we’re “of color”’ what kind of threats are being allowed to take place by people who are too busy fucking around to do the business of the people. This woman believes she’s entitled to a louder voice because she’s not white? therefore she doesn’t see others as her equal, hence she is a supremacist and a bigot.

This is good! They are doing Republicans a really big favor!

Your voice needs to be louder to make this point to all who are seeing and to put them in their place with just plain truth! 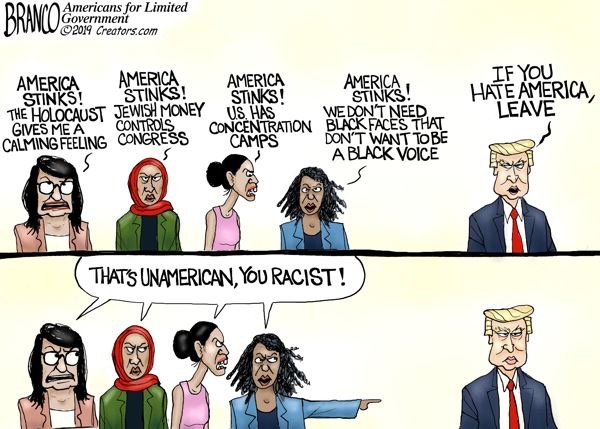 I’m always amazed, not surprised but still amazed, that for the Left you cannot be validly anything unless you conform to the peg hole they have assigned you to. It isn’t that there’s a proverbial plantation for blacks but that every group is assigned a camp where they should go.

This is true, maybe especially so, of progressive whites. At least in the Left wing version of the Woke world. The Whites Concentration Camp is for the virtue signaler, the perpetually contrite who can by proxy suffer the slings and arrows of outrageous fortune even as they bow to the notion that only those in a camp can understand those in that camp. Thus the self sanctifying white progressives are innocent of all horrors of the past because they weep for them and they are the universal victims by proxy because they empathize for them. They judge everyone by race and themselves by ideology. And because they mean well they should always get a pass. Or at least their important elites should.

Deplorables, Uncle Toms, people who don’t speak the assigned language of their camp (black faces who aren’t black voices)? The seriousness of the charges alone matters.