"Thou Shalt Not Troll!", sayeth the Pope

Based upon this, our Catholic users should refrain from trolling, at least for 40 days.

Based upon our guidelines and moderators requests, ALL users should do the same on this glorious site…FOREVER! 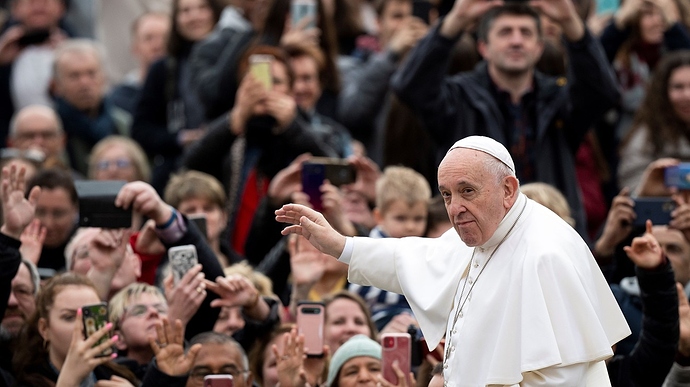 What the pope wants Catholics to give up for Lent: trolling

“People insult each other as if they were saying ‘Good Day,’” he said.

Much positive to take from that! Before you leave this Earth please keep teaching and inspiring! I’m good with that. Although, the rule doesn’t apply to Pope Francis who apparently enjoys trolling Catholics, daily.

Yeah - he has been making an absolute mockery of the original church of Christianity since he took over. Amazingly, nothing seems to stick to him despite his numerous missteps and blatantly inconsistent decrees.

On this point, I don’t disagree with what he is saying here. People do resort to insulting one another incredibly quickly nowadays. But that’s because people like him are hellbent on flooding the west with incompatible cultures that makes western cultures low-trust and fractured. We are all on edge and for good reason.

Catholicism is really the half-breed, bastard child of paganism and early Christianity. It’s hardly the creation of any omniscient deity.

Like so many other things, the tenets of Christianity work as a social paradigm in homogeneous culture.
Look at Europe…the beauty, the architecture, the music, all created for the glory of God.

Yes they were artisans who were supported by rich guys etc but there is no denying that the glory and magnificence of Europe was homage to the Christian God and to Jesus Christ.

Pope Francis is one of the biggest trolls out there.

Didn’t this ‘pope’ make a big noise a while back about bringing some of these poor innocent ‘refugees’ into, or should I say, behind the walls of the Vatican? That idea must have died quickly because I don’t remember hearing anything about it since. Im sure if he had done it, they would be parading them out in front of the cameras for bogus photo ops.

Yes, and Vatican City took a whole two families. I’m not sure what size, guessing between 3 and 8 for each family, assuming husband, wife, and anywhere from one child to a lot. It doesn’t look like they took any more families after this.

Vatican to take in two refugee families as Pope calls for 'every religion' to...

They only brought in a few pre-teenage ‘refugee’ boys who are kept too busy “blowing Gabriel’s Horn” for photoshoots.

He’s a Boomer, and Boomers think that the lesson of history is: “Liberalism will solve all our problems. Traditionalism, especially nationalism, and every kind of strict standard leads to world wars and the Holocaust.” That’s how they read history. It’s like they think the world began in 1900. They think (subconsciously) that everything before 1960 was the “dark ages.”

He’s trying to build a papacy on John Lennon’s “Imagine,” and young people don’t like that.

This shameful, disgraceful pope may be the last pope in history. Belief in the Catholic Church is withering away to a handful of old people.

Catholicism is really the half-breed, bastard child of paganism and early Christianity. It’s hardly the creation of any omniscient deity.

Someone should have informed you that “moral relativism” is not an excuse for making such statements based on “nothingness,” it’s just opinion. Your opinion be that as it may is no less or more valid than one who chooses to believe in Christianity.

The Catholic Church has become unrecognizable, obsessed with flooding Europe with the refuse of the world. The loss of its outward order and tradition, the Latin mass, the beauty of liturgy, architecture, discipline and order is emblematic of the rot and corruption within. Troll away, pontiff.

Why are you resurrecting old threads?

An old thread is new to a newcomer. The topic doesn’t go out of date!