This Is Why Mueller Can't Be Trusted

Mueller and Weissmann used the phone call as evidence that Trump was attempting to interfere with the special counsel Russia collusion witch hunt. 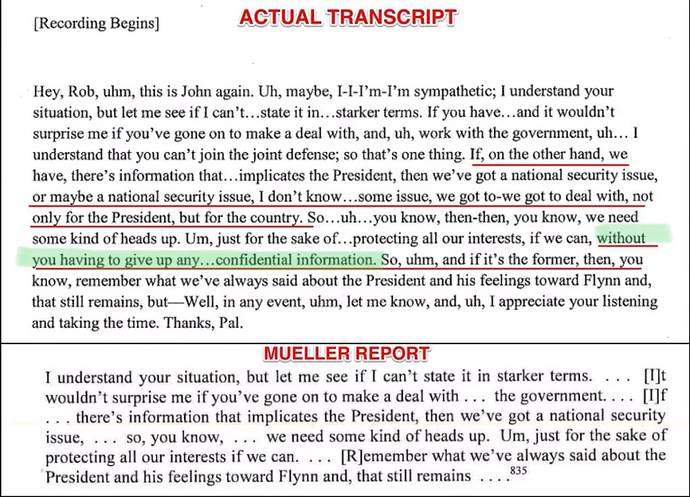 The next time someone is telling you what a great guy Mueller is, remind them that he and Weissman sent three guys to death row in Massachusetts for a crime they didn’t commit. When the state got rid of the death penalty, they went into gen pop doing life without. After about 20-years, total exculpatory evidence came to light and Mueller was against setting them free because it would damage the reputation of the F.B.I. Two of them were released, the third having died in prison.
For some asinine reason, Federal prosecutors and United States Attorneys carry some sort of super-duper immunity from prosecution for misconduct and obstruction of justice!
There was another real result of Mueller. Hillary couldn’t do it. Putin couldn’t do it. FBI/CIA & MSM couldn’t do it. Mueller interfered (in our faces) with an election. Notice that Barr understood Obama/Deep State interfered exactly like any foreign gov. Mueller and his Dem Mafia raided, blackmailed and took the HOUSE by interfering in the election. Mueller went out with telling the HOUSE to use his manifesto to impeach.
According to Barr, Huber didn’t do ANYTHING, that’s why he’s turned it over to Durham. He’s wasted time for the Deep State to do it’s work. Like Mueller. A “RINO” Huber was appointed by Obama.
Hopefully Durham won’t do the same and can work with subpoena powers to the NSA if necessary to find out what was swept under the rugs?
It will take Trump’s will and AG Barr’s cojones to get it done. Cotes, Haspell and Wray are now the obstacles in the way of the truth. Time will tell…

Mueller is definitely a dirtbag. He tried his damnedest in his nine minute parting shot to get the Dems steered toward the impeachment process.

This is likely a ploy to delay and take attention away from the investigations soon to come of the players that started the whole Russia/Trump collusion hoax.

I hope William Barr fries Mueller’s ass along with the rest of the lying spies.

Look at the “team” he assembled and that tells you all you need to know about THEIR "INSURANCE POLICY " !

Sessions=smarter than the average Dem…

The next time someone is telling you what a great guy Mueller is,

Lol, the right loved Mueller until he took the job to investigate things related to Trump, but the guy they would allow to get away with murder in broad daylight, the guy that thought he could pay off the ND in eight years, quit golfing to be president and run balanced budgets is trying to keep “browny” out and that Trumps all.

trying to keep “browny” out and that Trumps all.

Taking points that work with morons. Those with an education understand that correlation is not causation.

The lily white scandinavians are not illegally coming over our border in hordes. Nor are they flying airplanes into our buildings. If those who are doing such things have more melenin in their skin, Trumps attempts to stop them is correlated with their skin color but not by cause and effect. Correlation is not causation. Duh.

Maybe this will help you.

Correlation does not imply causation

Remember who was in charge of the FBI during Hillary allege sale to the Russians of Uranium one?

That’s right. He hand carried uranium to Russia himself.

Likely was rewarded with a cheese pizza party with the Clintons.

That’s right. He hand carried uranium to Russia himself.

They can’t be sure where the enriched uranium ended up which is is moot because it was not supposed to be exported at all.

King also repeated the oft-quoted narrative that the “company changed hands, but the uranium that is mined in the United States cannot leave the United States.” The NRC license now shows now that Uranium One was, in fact, allowed to export American uranium.

A legal expert on the CFIUS process told The Hill that the new revelation that the FBI knew that a Rosatom official was engaged in illegality on U.S. soil before the sale was approved could very well have affected the decision if that evidence had been made public in real time.