This is the Most Hilarious Story of The Week

This is pretty funny and I was amused reading what appeared to be a misunderstanding because a lot of people forgot who Barry Sanders was who wore number 20 while playing for the Detriot Lions. Garth Brooks was playing a concert in Detroit and was honoring the locals with their hero when he wore a Sanders Football Jersey where a snapshot of it made its way onto social media that freak out a lot of people. The reaction was funny to read though!

The country music legend wore a ‘Sanders 20’ jersey, which sent many on social media into a frenzy! Detroit You carried me all night long But you always have I’m in love with you!...

He didn’t mean to cause a big scene.

Country music star Garth Brooks sent social media into a tizzy over the past week for posting a picture of himself wearing a “Sanders 20” jersey on Instagram.

The snap was taken before he took the stage at Ford Field in Detroit last weekend, where he acknowledged that he was paying tribute to retired Pro Football Hall of Famer and former Detroit Lions running back Barry Sanders, who wore the No. 20. (He was performing on the Lions’ home turf, after all.) But many of his followers thought that the “Friends in Low Places” singer was wearing his support for Democratic presidential candidate Bernie Sanders in the 2020 election on his sleeve. Because, Sanders 20.

“Good grief. Can’t you just do what you get paid to do?” fumed one commentator. “Why why why does it have to involve politics,” she continued, adding, “So sad. We don’t pay good money for anything other than to watch you perform.”

“Nothing like supporting a communist to loss [sic] a few fans!” added another.

“If this is for Bernie Sanders, I’m done with you,” another user wrote. “I thought you were a true American that loves Our Country?”

“You just lost thousands of fans in Michigan Just stick to your music,” another fan complained, with the hashtag #trump2020landslide.

And the backlash continued to build up over the week, with “Barry Sanders” trending on Twitter TWTR, +0.58% on Friday morning — almost a week after he posted the controversial pic to the Facebook-owned FB, +1.43% Instagram — as those familiar with the football legend began mocking those who had gotten their Sanderses mixed up.

“Facebook forgot who Barry Sanders is and is freaking out at Garth Brooks for wearing a jersey and I’m dying,” @jasoncvincent tweeted. Facebook forgot who Barry Sanders is and is freaking out at Garth Brooks for wearing a jersey and I’m dying. https://t.co/wVfAKU7Cn1 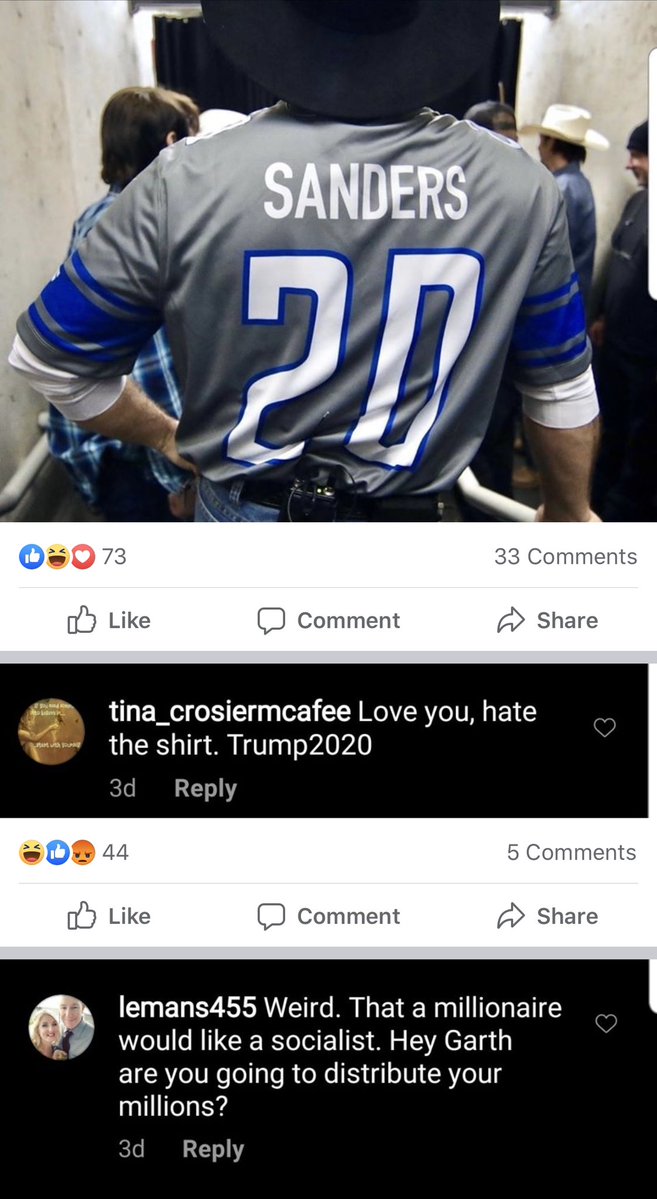 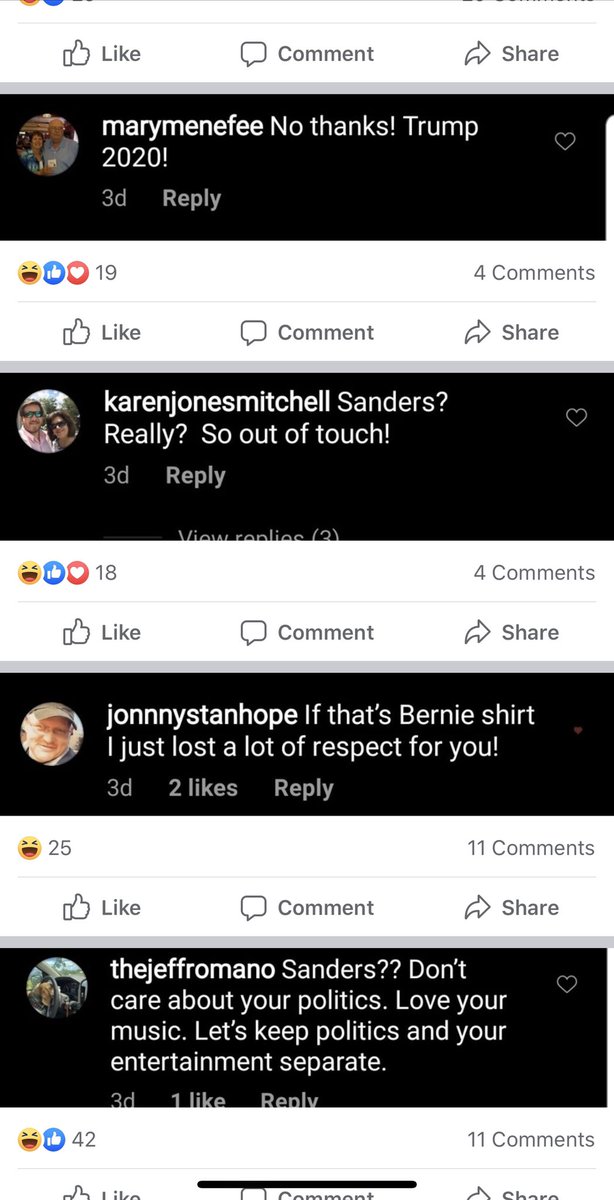 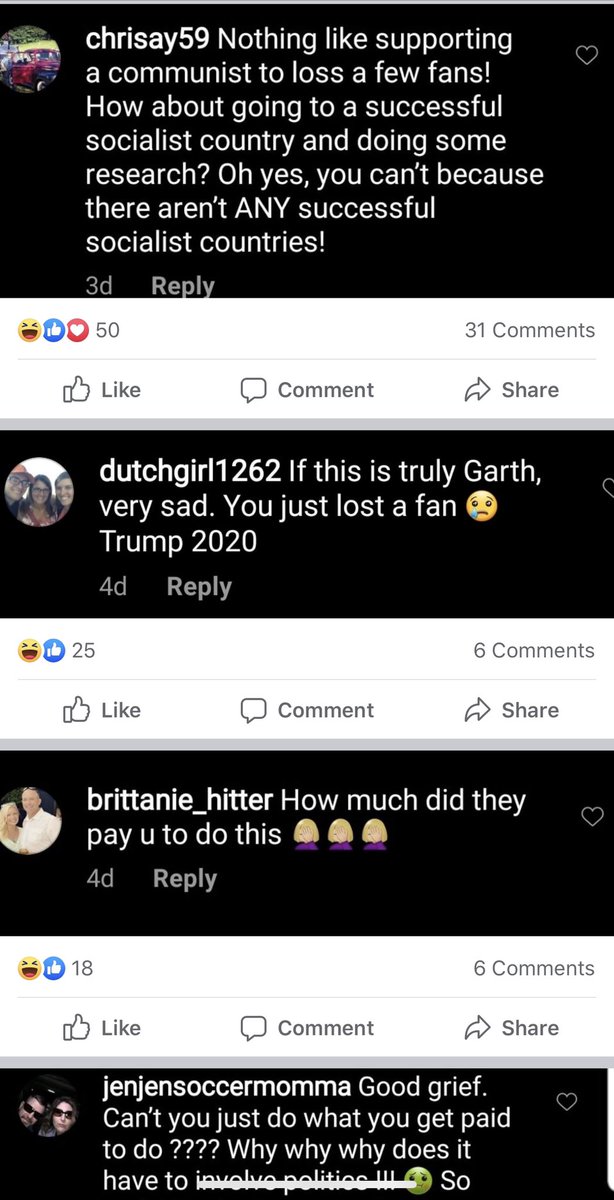 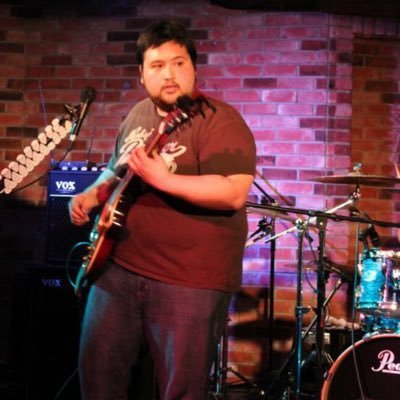 Not a big Garth Brooks fan, but it's hilarious that people are apparently mad he wore a Detroit Lions Jersey at his Detroit show. I didn't realize BARRY Sanders was such a divisive person lol. Maybe they're Packer fans... https://t.co/CcldWZSXdd 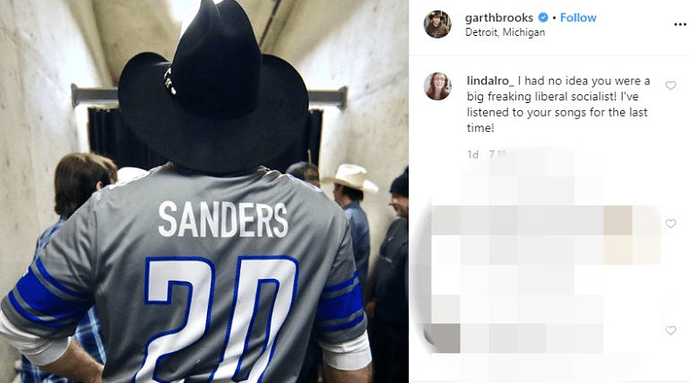 This last one was the best! I nearly spit up my coffee when I saw this one

I don’t know who the hell Barry Sanders is, but Bernie Sanders was a hell of a player back in the day https://t.co/Vr4orZBTMs 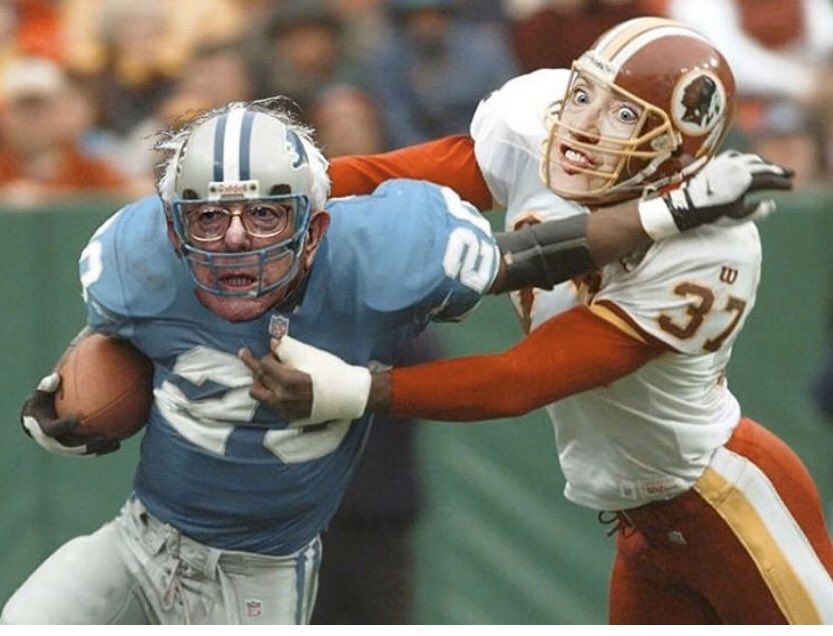 One of the game’s most electrifying runners, Barry Sanders rushed for more than 1,000 yards in each of his 10 seasons with the Detroit Lions (1989-1998). He was the first running back ever to do so. The 1988 Heisman Trophy winner was also just the third person to gain more than 2,000 yards in a season, a feat he accomplished in 1997.

A Pro Bowl invitee in each of his ten NFL seasons and two-time NFL Offensive Player of the Year, Sanders led the league in rushing yards four times and established himself as one of the most elusive runners in pro football