This Democrat is So Busted!

This is the kind shit is the reason I despise Democrats and their supporters because they are just too stupid to see the truth behind these fraudsters! 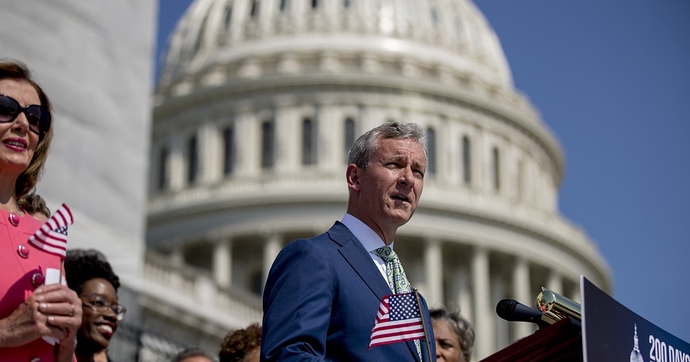 Rep. Matt Cartwright has spent years sponsoring truck insurance legislation that would directly benefit his family’s law firm, in which he owns a multimillion dollar stake, according to financial and lobbying records reviewed by the Washington...

Yeah - this moron was dumb enough to get caught but don’t think for a second that they don’t all do this same shit. How do you think they leave Congress so wealthy?

Yeah - this is what happens when slimy lawyers get elected to positions of power. We need to stop electing lawyers so they can stop passing legislation that will make their law firms a shitload of money.

“When you talk about what the Judiciary Committee’s doing, I’m all in favor of transparency. I like it when they have hearings because the more hearings we have, the more information comes out,” Rep. Matt Cartwright, Pennsylvania Democrat.

Isn’t it great when their own words circle around and bite them in the ass? A reporter should ask him if he supports transparency regarding his own investigation for wrongdoing.

They are making millions NOT to grow on land they purchased . WTF !!!

Maybe we need a counterpart to prenuptial agreements with Congresscritters limiting increases in their net worth while in office and confiscating excess above that?

Ill-gotten gains are ill gotten gains. If they engaged in some kind of unethical behavior to enrich themselves at our expense then it does need to be confiscated.

Typical lowlife Democrat. Rules are for thee, but not for me!

What a boring distraction. Meanwhile we have an occupant in the White House who is a foreign agent, a sexual predator, and a criminal.

That isn’t the topic. If you want to start a topic on that subject, please do so.

In the meantime, if you have nothing to add or contribute to the topic at hand you are simply attempting to derail the thread.

Fair enough. This article was published by the Washington Examiner, what is a foreign owned news company that engages in pay for play activities with conservatives. I’m sure we will find out in the coming days and weeks that this story was completely fabricated.

I agree, republicans, democrats they all belong to the same social country club, but democrats at least in my book are the more corrupt. There are still some Republicans that are principled enough to remain public servants and not be involved in this type of behavior, however those types are becoming an endangered species which does not bode well for the country as a whole and its future if people are not held accountable. Especially considering if no one is held responsible in the FISA abuse scandals as that is taking it up another level where public trust will be lost forever, and when that happens, cultural insurrection is inevitable!

No, silly, that was Bill Clinton.

… except for sex predator it could be Obama as well.

If the article is correct then it’s another example of total corruption but given the same, has anyone looked at what Elaine Chow’s (Mcconnell wife) been doing? WTF is up with that man? That’s also pure and in your face textbook corruption and self dealing.

I agree! I am no fan of either as Chao is working for the CHICOM’S and the “Turtle” works for the exclusive club that includes dickheads like Romney (COC, Tom Donahue and the multinationals) and should have been primaried a long time ago! The problem is his state can’t find a strong enough candidate in his district to successfully run against him!

Wow first thing you ever said that isn’t filled with your TDS bullshit!

Corruption is corruption regardless of who’s doing it…never should it be tolerated by any American as it’s with f**k up everything eventually.

As for the TDS comment, another example of psychological projection. you know what they say…can lead a horse to water…

It’s not projection, your posts are your own and evidence to support such opinions, the clear self denial on your part is yours and yours alone to claim. Always trying to deflect from your obvious character flaws is pretty weak on your part and only exposes you to be smaller! Nice try though! Try adding more substance to your posts you might find the insults will subside and conversations more meaningful!

It’s been pointed out to you before that psychological projection is generally follow by denial when exposed…a typical defense mechanism. Hope this helps.

There you go again projecting your own shit! Just keep shit posting until you are banned! Win win!