As earlier articulated in a thread titled "the brains behind AOC, it appears the story of her far leftists who mange Alexandria Ocasio Cotez’s campaign is gaining more steam drawing more skepticism to the underhanded methods that were used to elect her. Sundance from the Site "The Conservative Tree House wrote an interesting piece exposing a tweet that AOC sent out in rebuke of the allegations leveled against her that suggests she broke an Alynsky rule. A big no no in the inner cultural Marxist world. Mind you, her campaign Staff is facing possible criminal charges to bring to sunlight to this very topic and the nature of her far leftist operators tactics used that may have violated several laws in the process of getting AOC elected is something people all over are starting to wake up to. 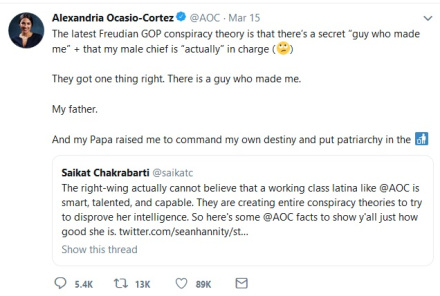 AOC Denies Being a Puppet Candidate, She’s Not Being Entirely Truthful… Amid growing revelations surrounding Alexandria Ocasio-Cortez as a puppet candidate, enlisted by a group of far-l…

Her approval ratings are in the tank now too. Noclassio Dirty-Sanchez sure has a lot of trouble handling the truth about herself.

Alexandria Ocasio-Cortez wants Socialism for you and me, but NOT for herself…at least that’s what her handlers tell her to say.

The evidence that she is nothing more than a low tier pissed off Puerto Rican actress is coming out. She wasn’t thinking about her grand socialist ideas while she was tending bar with her boobies hanging out. She’s paid to repeat a bunch of lines and nothing more. That’s why when she has to follow up on things she’s incapable of doing so.

This was from a poster on the Website “The Last Refuge”, which until recently started practicing censorship, but that is another topic for another discussion thread.

"It’s also been said by people in her district she’s been evicted from an apartment for not paying rent, owes back taxes on a start up business after college that failed, has had checking accounts closed by banks because she can’t manage money. She is the typical lib female, flailing arms, bizarre statements, often disconnected from truth and reality. She is young, naïve and inexperienced but do we think she will improve with age? Or is her natural behavior compulsive and radical?

Who knows what or who is behind her or the other rabble rousers elected last fall. Who knits what is fact or fiction. The Rabblers are there now and no matter how annoying they may be to Granny Nancy, they still are her offspring and she has to abide by them to a certain degree.

A Somalian district in the Islamic state of Minnesota elected Ilhan and be rest assured she will never be ousted. There is no will or way to even approach that thought. There is far too much cowardice to stand up and denounce her radicalism–just ask Judge Jeannine.

A district in Wisconsin must be quite proud of their new Muslim rep–the one with a vocabulary that would bring about strict discipline if she espoused her filth in an Islamic country. Maybe they love her because she’s so pro Palestinian?

It is now too much to expect for many House districts across America to elect pro-American representatives. America is greatly hated by the millennial generation. We can thank deception and lies from leftist ‘educators’. Propagandization has been so effective and comprehensive it is increasingly likely our young will gladly push the land of their forefathers into the socialist nightmare these ignorant, global thinkers have convinced them is so desirable. Add in the Balkanization of America thanks to the massive resettlement of poor, dependent global populations under the last 3 presidents, bringing very little to our table except a firm determination NOT to assimilate. Perhaps that collective agreement between WJC/HRC, GWB and BHO that America no longer should be a Christian nation and no longer should be proud is why they did what they did and why today, they so lovingly adore each other.

Pelosi will keep a low profile and let the final stages of America’s transformation take place. All she cares about is being the House Speaker, the Facilitator, of it all. Paul Ryan helped make her return to the throne as effortless as he could. It is Ryan and thousands of Republicans in elected offices across America that have feathered nests by walking the lobbyist line, reading statements prepared by Chamber of Commerce or the Koch Bros, so what happens from here forward is of no concern to them.

Of late, my family often discusses “what happens after Trump”? The conversations are dark, fearful, predictions are dire. Just four years ago when we discussed what would come about if Trump were elected, the skies would be a bit bluer in the figurative sense, freedoms would return as the boot heels of obsessive regulations and weaponization of govt agencies would be eased from our necks. Accountability would reign again from the highest level to the lowliest dwelling. The value of work, a paycheck and self esteem would be normalized and sought after again. Lower taxes, higher wages, fairness in trade, stronger military and homeland security, on and on and on. But in reality, what WILL happen after Trump?

Best buckle up because new voters coming of age and those being imported by the hundreds of thousands if not millions have seats at the table now. AOC is their voice, as is Ilhan and Rashida.

The new voters want a different country, they want different selves. On all sides they are being encouraged to hate themselves if born white, to despise their gender and expect taxpayers to ‘fix’ their gender issues with lifelong surgeries and drug ‘therapy’. They don’t want to work but they will be happy to get out of bed in the mornings to go stand in line for free stuff AOC promises is right there for the asking. They simply need to image the possibilities, right? They despise air travel and personal vehicles, they dream of having a 300 sq ft sparsely furnished high rise subsidized apartment where they will grow their own greens from which to survive. They want to legally medicate with marijuana and if they end up like so many, moving on to harder drugs, they want ‘safe injection sites’ on every corner next to Starbucks. Raised in daycare, often going home at nite to single parent homes, receiving no spiritual guidance as young adults have empty spaces in their souls. They want comfort, to be taken care of, to be loved by Big Government which promises to be the father they never knew, the nurturing mom that wasn’t there.

Think it’s not happening before our eyes? Start talking to college and high school age kids.

As for giving AOC credit for working her backside off to get up to speed, one thing is for sure–those that know the least too often know it the loudest. She will have a long political career. She will become very, very wealthy as a result and perhaps become a little more cohesive in front of a microphone.

Yet looking at the wild-eyed predecessors that she models, they really never become as enlightened and intelligent as we may hope. Beyond historic icons of depravity, oppression, murder, power and greed–Lenin, Mao, Stalin, Marx, bin Laden, etc., today’s young idealists may well end up like HRC, Maxine, and Nancy. Age, experience and advanced years doesn’t always mean refinement of message.

Liberal women have a great tendency toward even more lunacy and dangerous political points of view as they age as when they were younger. They are everywhere–asking questions during Congressional hearings, doing interviews on CNN, putting on shows at SOTU addresses, shouting in a bullhorn to a crowd to go get in their enemies’ faces. Libations in bottles usually improve with age, liberal women do not." ~ FARMHAND 1927