The Two Most Important Points About The Mueller Report Going Forward

I was just catching an article at “The Last Refuge” that seems to make a lot of sense to me. The entire Mueller report now that it is out is going to be fodder for the media leading up to the 2020 elections. Now that there was no Collusion or obstruction that doesn’t mean the shameless MSM will stop talking about it in order to use it as a weapon to support their Presidential candidates.

Don’t get lulled into thinking this thing is over; it is not. The Democrats don’t want people to notice the long-planned and coordinated Pelosi launch platform. The collective “left” want to run the impeachment hearing through the media, not the actual House of Representatives. Then they want the “impeachment vote” to take place at the polls in 2020.

This is a plan that is still rolling out.

The Mueller Report was Leaked to the media and as Sundance points out is pretty outrageous! If AG Barr doesn’t hold those who did the leaking (Andrew Weismann) then this entire charade will continue!
I am not sure I have words to express my outrage right now! I want to see arrests!

Whiskey – Tango – Foxtrot !! There has been a widespread media claim for two years that Robert Mueller’s special counsel team never leaked.  However, today, while entirely obfusca…

What? Not enough FBI corruption for your Easter Weekend?

Caputo just dropped this bombshell on Tucker a little while ago:

“In late May 2016, a man calling himself Henry Greenberg contacted Trump advisors Michael Caputo and Roger Stone offering negative information on Hillary Clinton. Both Stone and Caputo refused Greenberg’s offer, but in his May 2, 2018 interview with the Office of Special Counsel, Caputo noted the Mueller team knew far more than he did about the Greenberg approach. This set off alarms.”
[…]
“Michael Caputo deployed the financial resources of the Michael Caputo Legal Fund to investigate [private investigator according to Caputo] Henry Greenberg in the United States and Russia.”
[…]
“By his own sworn admission, Vostretsov has been an informant for the Federal Bureau of Investigations for at least 17 years. Comprised within the Greenberg Dossier, you will find irrefutable proof that another FBI informant contacted advisors to presidential candidate Donald J. Trump in summer 2016, offering information on Hillary Clinton.”

Further, Caputo insists that his own mention in the Mueller Sham… I mean Report… DOES NOT disclose Greenberg’s history with the FBI.

Borrowed from another board… looks like it was an FBI informant that originally offered dirt on Hillary to the campaign (Stone and Caputo) and the FBI (Mueller’s team) knew more about Greenberg approaching the campaign than Caputo did. Can we say set up?

I’m hoping Barr uncovers a lot of leakers (all of them) and FRIES their asses!

You will love this! Apparently after minutes after the report came out the reporters read the entire 448 page document within a span of a few minutes!

"It’s almost guaranteed Jake Tapper is not lying in that segment. Yes, it is impossible for two journalists to read 448 pages of the report and prepare to discuss it within minutes… but that’s not what they did.

Listening to NPR yesterday, one of their guests said this, I bring it up because I am sure it will be the democratic party platform in 2020, paraphrase from memory, “The Russians interfered in our elections to get Trump elected and they succeeded”. That’s right folks, all it takes to win a US Presidential election is 100k in facebook ads and a few twitter trolls.

Actually the most important point about the Mueller report was it is purely a ONE-SIDED version of what took place over the last 2 plus years . Laws were broken to start the unlawful investigation ,FISA court was lied to , surveillance was illegal , Hillary and the DNC pulled strings to get a judge to issue warrants . Also the report is TOTALLY a prosecutors case , who hears ONLY the prosecutors case in chief WITHOUT a chance to hear the defense side ? Has there EVER been a more bias team of " investigators assembled EVER before ?? Peter Struck and Lisa Page told us ALL what this Bullshit was all about , insurance to un-do an election they were pissed about . How in the world can ANYONE fight the FBI , DNC , Hillary , FISA courts , a special prosecutor , and the MOST anti- Trump team ever assembled ??? Was there any cross of any witness ? How many took pleas in order to move on and keep from going bankrupt ? How many plead guilty just to end it ? THIS WAS ALL BULLSHIT FROM DAY ONE !!! 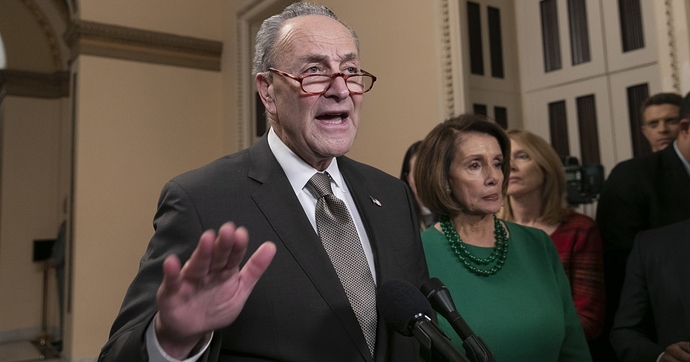 Pompous Democrats think they own the government. Screw them!

It’s revealing, no matter what this administration dos it will never be acceptable.

Perhaps they want it open so it can be leaked to the media and difficult to pin down the leaker.

They already know who the leakers are. They had a sting operation in place since Sessions was the AG. One useful thing he did while he was the acting AG.

Also the reason Democrats are so adamant about seeing the the full report, is that they know some people are indeed going to be indicted and they want to know who in order to get ahead of the DOJ to protect the swamp.

Nadler can’t do anything other than bloviate his faux pas outrage. The fact of the matter, Barr is following the rule of law and the Democrats can’t do a thing about it! 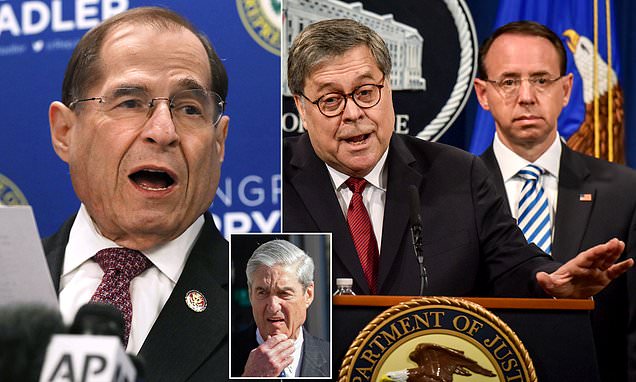 House Rep. Jerrold Nadler has set the stage for a showdown with Attorney General William Barr over Democrats' demands to see the unredacted report submitted by Special Counsel Robert Mueller.

Joe DiGenova goes off on a liberal reporter on air! Wow!