As tax brackets are being released, communist MSMs twist the facts.

As the debate over wealth taxation rages on, journalists have assumed a central role in the dissemination of empirical claims about the distribution and historical trajectory of U.S. tax policy. Unfortunately several leading media outlets have approached this task by engaging in political advocacy on behalf of Elizabeth Warren and Bernie Sanders’ tax plans, sacrificing factual accuracy in the process.

A recent statement by the New York Times editorial board reveals just how politically distorted the coverage has become.

Promising to set “a few things straight” about wealth taxation, the Times advanced an astounding claim:

“The wealthiest Americans are paying a much smaller share of income in taxes than they did a half-century ago. In 1961, Americans with the highest incomes paid an average of 51.5 percent of that income in federal, state and local taxes. In 2011, Americans with the highest incomes paid just 33.2 percent of their income in taxes, according to a study by Thomas Piketty, Emmanuel Saez and Gabriel Zucman published last year. Data for the last few years is not yet available but would most likely show a relatively similar tax burden.”

As with previous editorializing by the Times, this piece relied upon controversial empirical work by Piketty, Saez, and Zucman. Over the last several weeks this group of left-leaning economists has cluttered the U.S. tax debate with a veritable French “Reign of Error” of deeply misleading and perhaps intentionally manipulated statistics to prop up the case for the Warren tax plan. By continuing to rely upon the PSZ triumvirate without acknowledging the substantial criticisms of their data, the American press has ventured into the territory of journalistic malpractice.

But the Times’ most recent editorial took this ongoing politicization of economic data reporting even further, giving a false impression that tax rates on the wealthy have dropped by over 18 percentage points in the last 50 years.

The Times did so by cherry picking its numbers from the 2018 iteration of the PSZ statistics in the Quarterly Journal of Economics, which is less controversial than newer revisions released by Saez and Zucman. This study at least has the benefit of having undergone peer review, and attempts to estimate the overall tax rate of the top 0.1% of earners over time.

The problem with the Times’ accounting arises from the years they chose to bookend their claim, 1961 and 2011.

Let’s consider each in turn.

First, their 1961 figure purporting to show a rate of 51.5% on the top 0.1% of earners comes from a section of the PSZ study that is almost certainly unreliable. In 1962 the IRS introduced microdata reporting of its tax statistics – a more refined set of numbers that allows researchers to dig deep into distributional questions about the federal tax burden. No such numbers existed however in 1961, which means the PSZ study had to rely on a series of imputations taken from an older estimate of the income share distribution published by Piketty and Saez in 2003.

Yet as my own investigation of these data has shown, the older Piketty-Saez 2003 study is marred by several data quality issues prior to the introduction of IRS microdata in 1962. It systematically overestimates top income shares across the board from 1917 to 1961 by erroneously adjusting for tax code discrepancies in this period, and by underestimating the total amount of tax-eligible income earned in each year. It is therefore unreliable to use as a baseline for estimating top tax shares.

We may see this problem directly in the PSZ-2018 numbers where a clear discontinuity exists. According to the PSZ series, the average total tax rate on the top 0.1% dropped from 51.5% in 1961 to 43.6% in 1962, even though the main federal tax rates were not changed during those years. Indeed, from 1950 to 1961 the PSZ estimates consistently place this rate around 50%, whereas after the microdata estimates become available it drops instantaneously to the low 40s.

By selecting the last year before the better microdata files became available, the Times thereby artificially inflates the tax rate paid by top earners in this period.

Second, turning to 2011 reveals that it is an equally bizarre choice for the Times to use while bookending its argument. Contrary to what the editorial claimed, 2011 is not the most recent year with available data – 2014 is. And further contradicting the Times’ argument, the PSZ statistics for 2014 show a higher tax rate on the wealthy (39.8%) than the 2011 number (33.2%) quoted in the editorial.

The reason for the discrepancy may be found by digging deeper into the underlying data. 2011 reflected a temporary trough in overall effective tax rates across the board, likely attributable to the wake of the 2008 financial crisis and recession.

These events appear to have disrupted the normal revenue yields from capital gains taxation, which is historically sensitive to business cycle events. As a result, the overall tax rates paid by the wealthy temporarily dipped from 2009 to 2012. In 2013 they returned to their pre-recession norm of about 40%, as the highlighted image below from the PSZ data files shows. 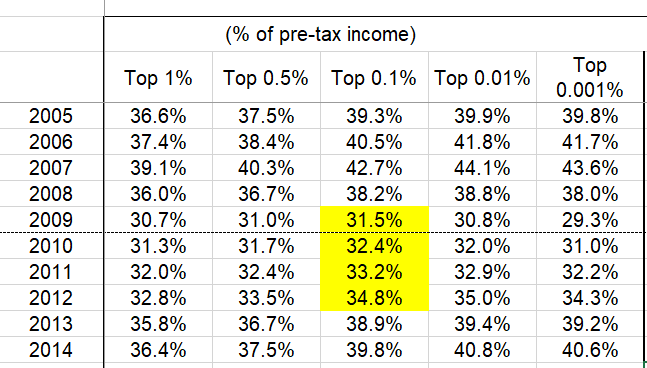 In short, the Times appears to have selected 1961 and 2011 to create the illusion of an 18 percentage point decline in the average overall tax rate paid by the wealthiest earners. The actual decline, measured from the earliest microdata year 1962 to the most recent available year in 2014 shows a top average tax rate change from 43.6% to 39.8% – or only 3.8 percentage points in 50 years.

We may see further evidence of the severity of the Times’ misleading portrayal by looking to how top rates held up over the last half-century. For his own part, Zucman recently tried to lend credibility to a Times -style contention by tweeting claims of a dramatic double-digit drop in tax rates over this same period.

In reality, even the PSZ estimates reveal only an exceedingly modest cut in taxes on the top earners during this period.

Let’s consider the average top tax rate for the two decades prior to 1980 – the year Ronald Reagan was elected, allegedly portending a dismantling of the progressive tax system according to the Times , Saez and Zucman, and Elizabeth Warren. From 1962 to 1980 the overall tax rate on the wealthiest earners averaged 43.1% per year.

So according to the PSZ series used by the Times, overall tax rates on the wealthiest earners did decline in the last half-century – but only slightly. The tax cut amounted to no more than about six percentage points, or less than a third of what the Times editorial board claimed.

When debating tax policy it is important to use empirical evidence to inform the discussion of what rates the top earners currently pay and what rates we would like them to pay, or if a rate change is even warranted at all. We cannot have that discussion, however, when academics such as Saez and Zucman put their fingers on the scale of their own measurements, and when top journalism outlets that claim to be papers of record present such blatantly distorted and politicized picture of what the empirical evidence reveals. 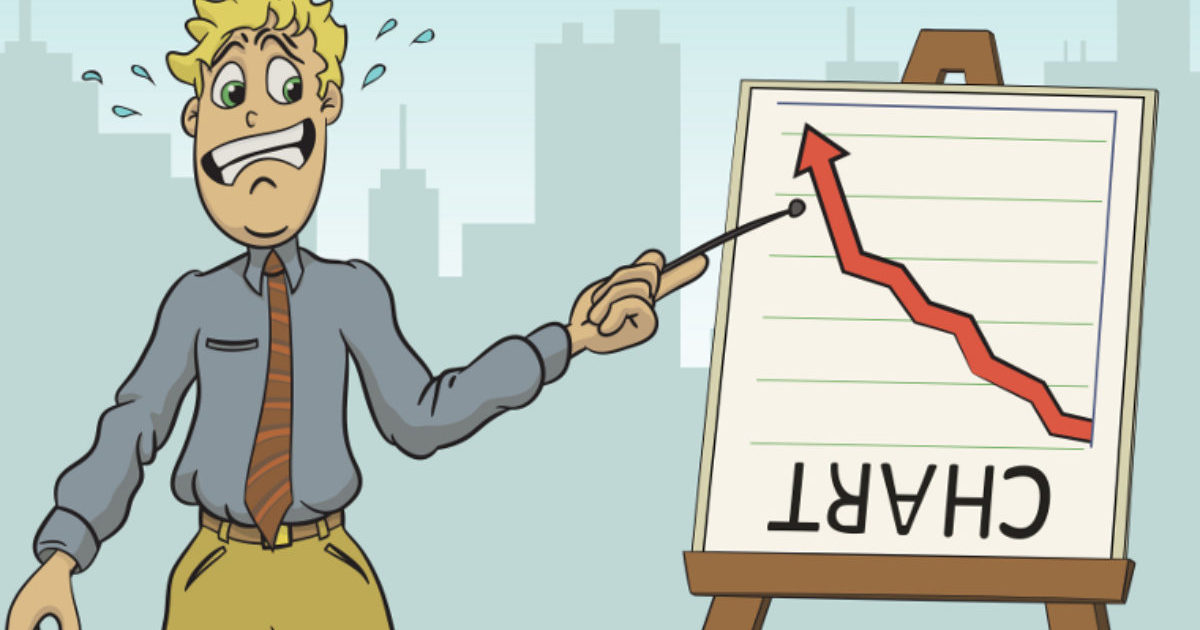 When debating tax policy it is important to use empirical evidence to inform the discussion of what rates the top earners currently pay and what rates we would like them to pay, or if a rate change is even warranted at all.

I had this article a few days ago and it’s a perfect example of how the MSM is pushing to changer redefine reality.

But another sample of the lies in the media.