Here is a conspiracy that is more or less known to all. The question is did the US government cover up an Alien crash in Roswell. Many witness have all claimed that it was a craft not of this world. The witnesses include military personal as well as some citizens. The Government has changed the story of what happened at Roswell several time over the many years. This change of events by the Government and eyewitness reports which do not vary from one another have caused many people to believe this in fact was a cover-up by the US Government to keep quiet that there is life among the stars. The question is is whether it was true or not.

I have been through there as well, road signs with aliens on them, inflated green aliens at retailers, a model UFO on top of a car dealership lobby. Yes, they get publicity however there are many eyewitnesses who have more to say than just the single incident of an alleged UFO crash. Your analysis as to the general consensus of the locals is necessarily false dear fellow.

So what you are telling me then is the Government does not cover up anything. I find that very hard to believe. Iran-Contra is a perfect example of a cover-up. The Roswell case not only has a lot of witnesses ranging from High Ranking Military personal to common citizens all who saw the same thing. Most of these people have never met one another, yet some did and all their stories are basically the same. How do you deem we are not important enough for visits from people from other worlds? Funny thing when people close their minds to the possibility that it could be possible this happened. I am not saying it did but there is a lot of info that points in the direction that it was more then what the government says it was. The Government has change the cover story to this incident quite a few times. Military personnel when the crash first happen stated to the press that it was a UFO. I am not by any means saying it was a UFO it is quite possible it was a top secret Government Plane or something of that nature. Then though there are the Civilian witness at the crash site that stated the bodies were not of this world along with Military Personal who also went on record to say the same thing. I can give you a list of some of the names of the people civilian and military if you like. I do tend to suspect the Government is hiding more then they want to tell.

. I do tend to suspect the Government is hiding more then they want to tell.

Of course they do it’s why we are able to stay technologically ahead of our adversaries! No different than any other country as well!

I can’t say for certain whether Roswell is true or not, but I too have been there and the entire town exploits the alien theme for tourism! Any way thought the story was debunked when it was reported that it was a weather balloon?

Saucers crashing or crash landing is not limited to Roswell. 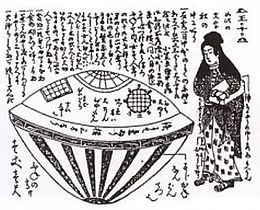 Utsuro-bune (虚舟, 'hollow ship'), also Utsuro-fune, and Urobune, refers to an unknown object that allegedly washed ashore in 1803 in Hitachi province on the eastern coast of Japan. When defining Utsuro-bune, the bune part means "boat" while Utsuro means empty, or hollow. Accounts of the tale appear in three texts: Toen shōsetsu (1825), Hyōryū kishū (1835) and Ume-no-chiri (1844). According to legend, an attractive young woman aged 18-20 years old, arrived on a local beach aboard the "hollow ship"...

As for Roswell, another craft crashed/crash-landed in the mountains and the occupant was saved by Apache youths, as these Native Americans had no aversion to alien beings as their folk tales often speak of “star brothers.”

UFO crashes occurred in the Soviet Union and China as well and they were kept top secret by the respective governments. Obviously such technology is closely related to military advancement.

Unlike the American media, Russian media are more open to this topic.

Try breaking up into paragraphs next time. Just hit the enter key/.

I did not say I bought the story that it was an alien craft it may have very well been a top secret military venture.

I don’t believe in alien abduction so I tend to agree with you on that point. I do however believe there are far more advanced forms of life then our own.

The Universe is to vast not to have a race or form of life that is far more advanced then us. Do I think that we have been visited yes I do.

Hey maybe I need a Tin foil hat as some one told me awhile ago on another thread. I am open minded and allow for the fact that it is a possibility that is happening.

UFO’s have always been one of those topics that I’m open to but have never seen any hard proof so far at least. I sometimes suspect that their COULD be other humans on some of those earth like planets NASA talks about from time to time but that’s also just my speculation.

Check this out. Here’s a black man in Nevada who can summon UFOs on command using his knowledge of the Bible. Weird. 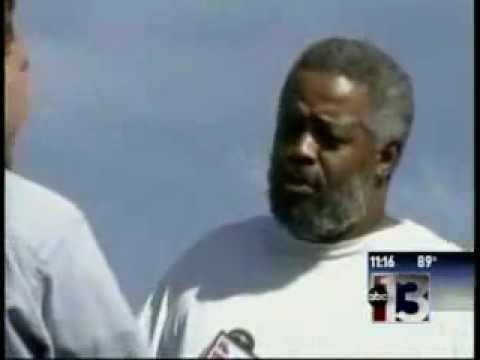 I went to the original museum before they moved it. Beyond entertaining and a nice town in general.

Of course they exploit it. It’s all they hav other than a little oil drilling.

Being a resident of NM, I can tell you that they certainly use it for advertising purposes. The McDonalds is in the shape of a UFO, Walmart has aliens on their signs.
Since I am a Flat Earther, I don’t really believe in the Alien story anymore. I think it was just a way for the goverment to experiment on people and with things. Then if caught, they can blame/ start the conspiracy theory of Aliens. The CIA is the one that coined the term Conspiracy theory…that should tell you everything.

Also there is a Forbes article on the internet where the Iranian government accuse the US government of being run by tall white aliens. One of iran’s top generals has previously said that the Iranian air force open fire on a UFO but couldn’t damage it

UFOs have been turning off nuclear warheads

It was testified by retired military personnel.

Actually, actually, superior beings probably would be watching us because they think we are too primitive to be venturing out into outer space with all our murdering, wars, and such, even that country the United States of America is trying to impeach the best president they have ever had! So, if you alien guys are reading this, which you probably are since Politicalbullpen is such a great website, please don’t bomb my house or anything because I really really am a great guy!

You really are a great guy god bless us all

UFO related matters are top secret not only in the US but in Russia and China, because such technologies are readily convertible to military applications.