The Pope, an Islamic apologist? Can Christian and Islam faiths live together?

The Pope, an Islamic apologist? A look at the difference between the Christian and Islamic religions. An important understanding to see what drives our politics of immigration and understand whether it is even possible to coexist in peace.

Join US on Discord: https://discordapp.com/invite/4UuR9Mx

The Crusades were totally nuts. So much human misery in the name of Mohammed & Christ. But ( BUT ), I have never seen a passage attributed to Christ that stated, Spread My Word By Violence. Not so with Mohammed.

As pointed out in the VIDEO, yes both faiths had human misery. In the early days followers of both faiths did not have access to the text or even could read, hence merely followed what was told to them.

HOWEVER, once knowledge became available (printing presses) and education (ability to read), people could start to think for themselves and the meanings of the faiths could then be evolved, adhered to and inculcated into the culture.

The cultural evolution driven by the followers of the Bible and Koran have very different outcomes, because of the core beliefs found in these texts. This is the point.

Well, the question “Can Christian and Islam faiths live together?” Are we talking about the religions themselves or the people?

If the people, people of both faiths have been living harmoniously together for thousands of years in Syria, history notes this. Also other parts of the world like Singapore, Indonesia where both are living peacefully together in modern day societies. Of course I am not saying I am trying to make a case that in the broader narrative here that the two can peacefully coexist, but just pointing out that it has happened. 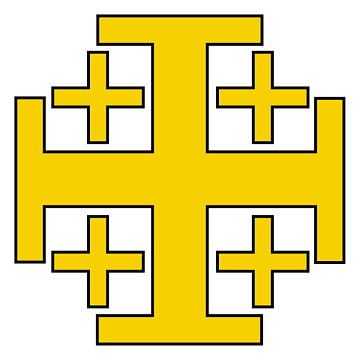 What I said; I have never seen a passage attributed to Christ that stated: Spread My Word by Violence.

The two can coexist. They have in the past. There were times where the violence between the two was no worse than with any other division… based on wealth gaps, national origin, blue blood names, cultural caste systems, etc.

Religion - per se - is typically not the root cause of violent confrontations.

Egypt, the Breadbasket of the Med, in their hands and a once prosperous North Africa depopulated and destroyed, other conquests, piracy, disruption of commerce, slaving, pillaging and looting … centuries of naked Muslim aggression before them the Crusades which fought only a relative few battles were nuts?

Don’t even play into the Rhetoric of the Left, never mind of Islam, by repeating it.

Yes, when Christians haven’t emulated Christ bad things have sometimes happened … the Crusaders acted little different abroad than at home … but the Muslim’s whose aggressions they were at least officially responding to were being good disciples of Mohammad the whole time.

Only while the Muslims are very weak or backslidden or else Christians subservient, knowing their place under Sharia.

If the war against the Axis powers was called a Crusade could it be acknowledged as brutal as its namesake?

The answer to your second question in the thread title is NO WAY!

Islam is sworn to kill all infidels (those that are not Islamic). There’s is not a tolerant religion. It is an intolerant theocracy, founded by a demented pedophile, Muhammad. 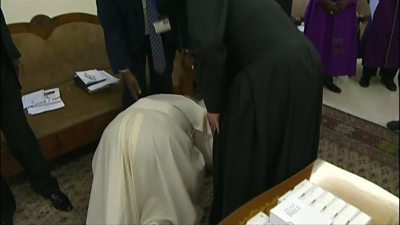 The 82-year-old pontiff kneels down in front of each leader and then appeals for peace.