The Pentagon confesses that it lied about killing ISIS operatives

The Pentagon confesses that it lied about killing ISIS operatives

For many years, the American military was the most respected institution in America. In the seven months of the Biden administration, we’ve learned that the upper reaches of the Pentagon are partisan, corrupt, possibly treasonous, and totally incompetent. The latest evidence of this is General McKenzie’s confession that the military didn’t really kill an “ISIS-K fighter” after Islamists slaughtered 13 American troops. Instead, our military drone attack killed an aide worker, seven children, and two other adults. This is unconscionable and I have a few points to make.

The MSM didn’t bother to report the massive corruption and lies of the military sanctioned by this corrupt administration.

It’s a sad day for America between the botched, chaotic withdrawal from Afghanistan, 13 of our finest killed and then a botched attempt to retaliate by droning an aid worker and his family.

Lying is routine with this administration .

I feel sad for the poor soul at the bottom that will be blamed for flying the drone while the superiors above escape everything.

Yes it is and the lying MSM let them get away with it. Imagine if The Donald would have killed a ton of kids like this, the reaction from the same POS.

Not ONE member of the Military was killed during The Donald’s ENTIRE four year term.

This crowd are in for just 7 months and ALREADY double digits of the Military have been killed by the DELIBERATE ACTIONS of this Regime in Washington DC and to add to that 10 INNOCENT kids killed also, but who CARES about 10 innocent kids getting killed when you’re The Party of Abortion, The Party of Mass Genocide of The Unborn.

They are literal Demons, they are the Agents of Satan.

They are literal Demons, they are the Agents of Satan.

Just like Hillary with Benghazi dems allow our citizens to be executed in foreign Countries .

They haven’t put the words in the teleprompter yet. He isn’t capable of commenting on anything without being told what to say.

Like Queen Hillary said, What does it matter!!! Will the U.S pay hush money to the victims families???

Not ONE member of the Military was killed during The Donald’s ENTIRE four year term.

The number of US troops who died in war zones rose in 2017, the first year of Donald Trump’s presidency, for the first time in six years. As of Dec. 28, at least 33 military personnel had been killed in war zones overseas compared to 26 last year, according to an analysis of casualty statements released by the Pentagon. At least 21 of those died in combat, according to the Pentagon — some in places where the US presence was not widely known. 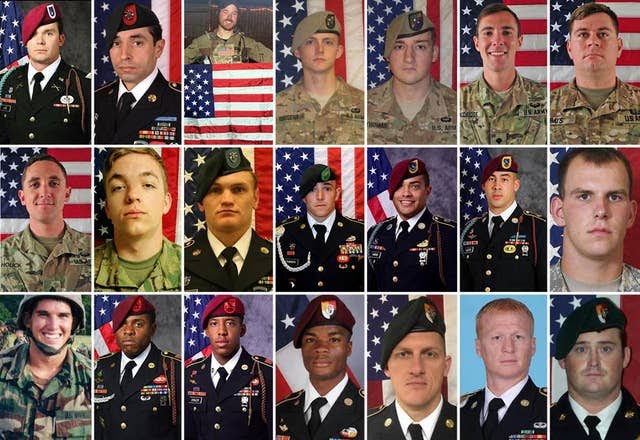