The IMF Paints a Less Robust Economic Picture for 2019

In its latest World Economic Outlook released April 9, the International Monetary Fund (IMF) downgraded its estimates of expected annual growth for most countries in 2019. The IMF now expects the global economy to grow by 3.2 percent, down 0.3 percentage points from its January estimate. The change in expectations was driven by slowing economies in the developed world. 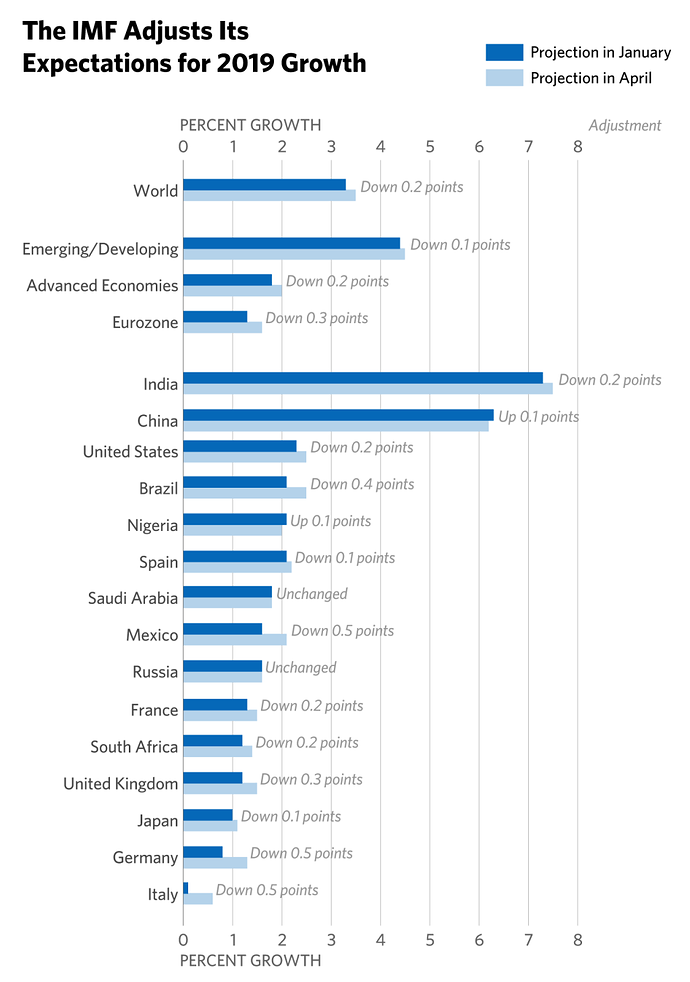 There are three big takeaways from the numbers:

Europe’s Slowdown Continues to Drag Down Global Growth: Unsurprisingly, the biggest declines were in the European Union. The slowdown in Germany is particularly concerning given that it has been driven by its auto sector’s diesel emissions scandal and decreased production. These challenges would be exacerbated if the United States follows through with threats to institute tariffs on European cars. Continued uncertainty about Brexit is also weighing on the European economy.

U.S. Growth Is Revised Downward: From January, when the IMF’s growth expectations for the United States held steady at 2.5 percent, the group now expects the U.S. economy to grow by 2.3 percent in 2019. A cooling U.S. economy would give the Federal Reserve more room to slow down its cycle of monetary tightening. But significantly, U.S. economic growth — relative to the rest of the world — remains strong.

The Developing World Is Not Immune: The IMF did not significantly downgrade expectations for most developing countries, with a few exceptions such as Brazil and South Africa. In fact, China’s growth estimates were revised slightly upward, in line with its stimulus policies.

Overall, the IMF’s expectations show that two of the world’s three major economic engines — the United States and China — remain relatively strong while the other, Europe, continues to sputter. In total, the IMF expects global growth for 2019 to be the lowest in a decade. For now, the IMF does not expect a global recession, but geopolitical risks remain.

Chief among those would be a no-deal Brexit or a continued trade standoff between the United States and China. It appears as if both of those scenarios might be avoided, but U.S.-China talks could still collapse or deliver less than expected on tariff reduction, while Brexit talks could also fail. Other economic worries stem from White House threats to close the U.S.-Mexico border and slap auto tariffs on its trading partners, as well as the potential market reaction if Italy fails to hit its economic growth targets. These geopolitical risks — and more — paint a picture of a relatively stable global economy facing some potential danger spots.

Perhaps the legend is reversed…or it’s some new math.

These are just distractions! News threads! We have to start being focused on the real threats which is the rise of Marxist ideology.

I don’t really give a damn about any globalist organizations…IMF, WTO, EU, UN, et al…I’m just pointing out the patently obvious error in this bullshit report.