The Fourth Amendment is Under Attack Again

General warrants, which were usually issued in secret in London, permitted British soldiers and agents in America to search wherever they wished and seize whatever they found. General warrants were not based upon any individualized suspicion, much less any probable cause. Their stated purpose was the need to enforce the Stamp Act, a totalitarian measure that cost more to enforce than it generated in revenue.

The Stamp Act required all colonists to purchase and affix stamps to all legal, financial, political, personal and public documents. It was billed as a revenue-gathering measure, but it truly was used as an excuse to humiliate the colonists by permitting soldiers and agents to enter their homes ostensibly looking for the stamps. They were really looking for evidence of revolutionary ideas and plans against the king.

After Americans won the Revolution and wrote the Constitution, they did so with the determination never to permit the new government here to do to Americans what the pre-Revolutionary British government had done to the colonists. Their chosen instrument of that prevention was the Fourth Amendment.

The Fourth Amendment has a painful yet unambiguous history. The essence of that history is the well-documented and nearly universal Colonial revulsion to the British use of general warrants.

But the feds have been wearing away at the right to privacy for generations. The Right to Financial Privacy Act (which has nothing to do with protecting privacy) permits federal agents to obtain certain bank records with search warrants issued by other federal agents — as opposed to judges — as long as they are looking for mobsters or drug dealers. The Patriot Act (which has nothing to do with patriotism) enables FBI agents to issue search warrants to other FBI agents for certain business records — including doctors’ and lawyers’ offices, car and ■■■■■■■ dealers, and the post office — as long as they are looking for threats to national security. And the Electronic Communications Privacy Act (which interferes with the privacy of almost all electronic communications) permits FBI agents to access certain metadata (the who, where and when of emails, but not their contents), as long as one FBI agent issues the warrant to another and as long as the recipient uses it for national security purposes.

Now the FBI wants access to everyone’s internet browser history, as long as its agents are looking for spies or terrorists; and again, it proposes that rather than present probable cause to a judge and seek a warrant as the Fourth Amendment requires, one FBI agent be authorized to issue a search warrant to another.

The Fourth Amendment was expressly written to protect our individual right to privacy from the voracious and insatiable appetite of government to assault it. It was also written to ensure that government can seek evidence against bad guys, but it was meant to force the government to target them based on real evidence, not to let it sweep them up in a suspicionless net along with the innocent.

Wake up, America. The Fourth Amendment is supposed to be a pain in the neck for the government… So is the Second amendment… but that’s a different RIGHT yet miraculously close in reasoning to Fourth Amendment… government cannot and should not ever have the complete trust of the people it represents nor should it ever have the tools to completely suppress those people.

This is exactly why red flag laws are unconstitutional. They are complete and total violation of a person’s 4th amendment rights.

Have these obviously unconstitutional acts been challenged in the courts??? What loopholes allows the government to issue warrants without going to a judge??? This is as bad as the head of the DEA issuing warrants to DEA agents for drug busts etx.

Red flag laws would mean that you would have to have moral & pure leaders and leadership…I doubt that that is the case. Slippery slope.

You would have to tolerate obnoxious neighbors so they wouldn’t report you to the police. 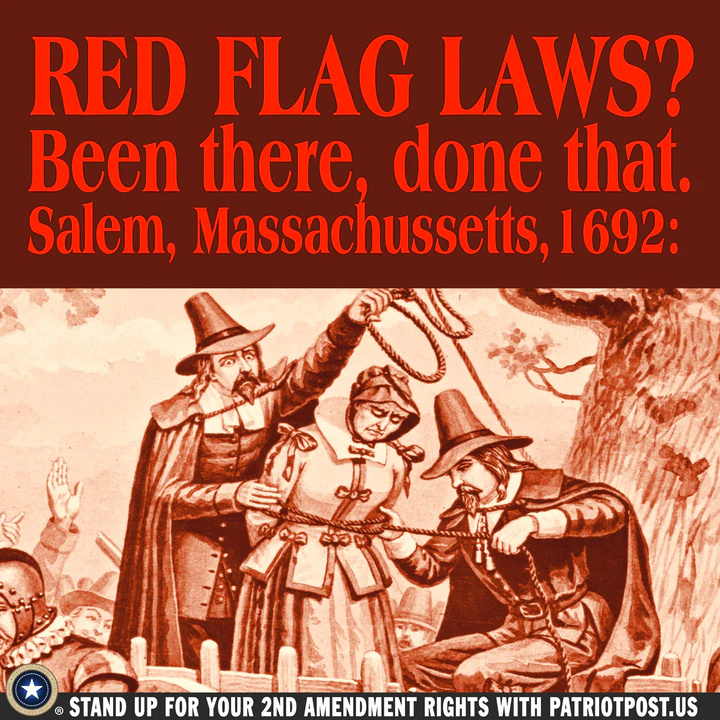 Whether you tolerate them or not they can simply flag you because they don’t like you.

If we’re going to pass any sort of RFL’s the first requirement needs to be no seizure prior to due process and the 2nd should make it a felony to file a false report with a mandatory minimum 2 year prison term.