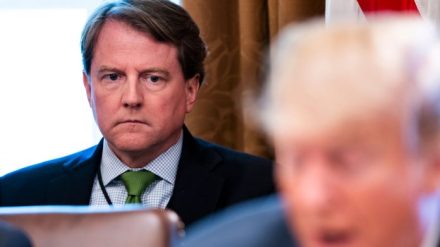 The FBI Corruption is Far Worse Than We Currently Imagine – President Trump...

NOTE: Article updated 4:00pm to resolve conflict between Exec. Order 13787 / Exec. Order 13775 on DOJ succession and FISA authorities. Last month the DOJ admitted to the FISA court that two of the …

Although the title is somewhat misleading, this is an excellent article. President Trump did not directly authorized surveillance of his own administration. He issued an executive order via Don McGahn that allowed Dana Boente, as United States Attorney for the Eastern District of Virginia, to authorized the April 2017 FISA warrant which has since been declared illegal.

At the time, both Boente and Comey knew what they were authorizing was illegal.

In late 2018, when McGahn discovered what he had inadvertently allowed, he resigned.

This is very interesting and confounding at the same time which was my first reaction when reading this article. I am not sure why Trump allowed Don McGahn such authority other than to set a trap. Also they knew what they were getting with Boente as he is lower than a snake in the grass like Andrew Weismann who should have their law licenses revoked!

Lastly, I would imagine that this is one reason why Trump was adamant about not allowing McCahn not to testify and why Democrats were trying to use him as leverage over Trump. Funny how that turned out huh?

Snake Weismann’s campaign donations to Barack Obama and Democrats and for overreaching prosecutions were overturned by higher courts, including in the high-profile Enron case.