Many of you already know the story, here is the update.

The text below references the movie "Thirty Seconds Over Tokyo."

that were captured & tortured by the Japanese titled "The Purple Heart."

Three were executed as war criminals, a fourth died in captivity.

The FINAL TOAST! They bombed Tokyo 73 years ago.

They once were among the most universally admired and revered men in the United States … There were 80 of the Raiders in April 1942, when they carried out one of the most courageous and heart-stirring military operations in this nation’s history. The mere mention of their unit’s name, in those years, would bring tears to the eyes of grateful Americans. 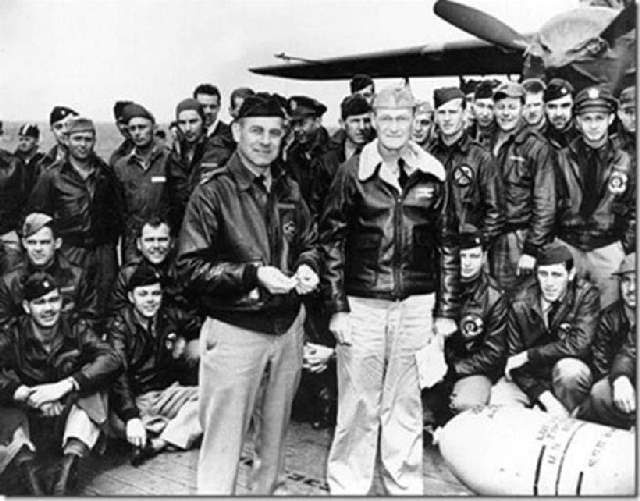 with the United States reeling and wounded,

something dramatic was needed to turn the war effort around.

Even though there were no friendly airfields close enough to Japan

for the United States to launch a retaliation, a daring plan was devised.

Sixteen B-25s were modified so that they could take off from the deck of an aircraft carrier.

This had never before been tried – sending such big, heavy bombers from a carrier. 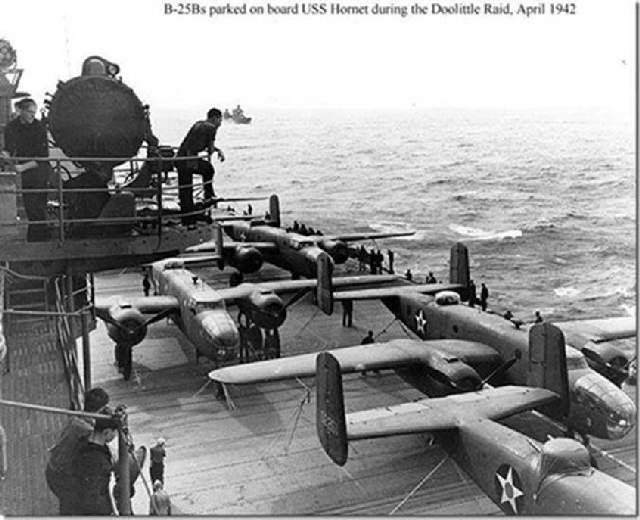 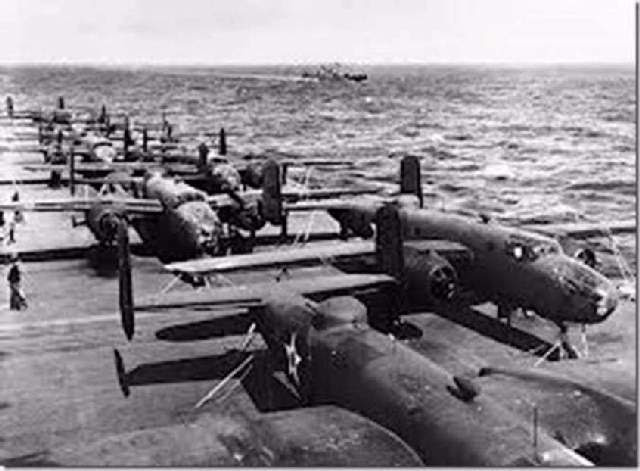 The 16 five-man crews, under the command of Lt. Col. James Doolittle,

who himself flew the lead plane off the USS Hornet,

knew that they would not be able to return to the carrier.

They would have to hit Japan and then hope to make it to China for a safe landing.

But on the day of the raid, the Japanese military caught wind of the plan.

in the Pacific Ocean than they had counted on.

They were told that because of this they would not have enough fuel to make it to safety.
And those men went anyway. 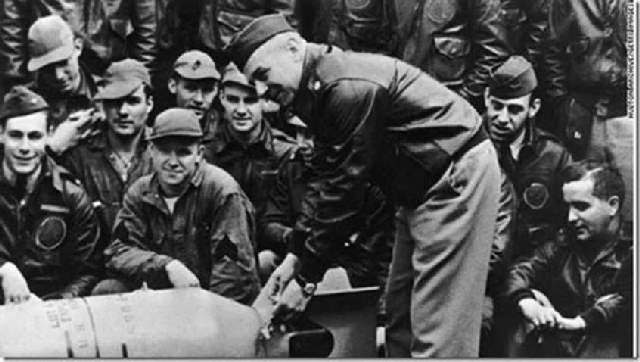 They bombed Tokyo and then flew as far as they could.

Four planes crash-landed; 11 more crews bailed out, and three of the Raiders died.

Another died of starvation in a Japanese prison camp. One crew made it to Russia . 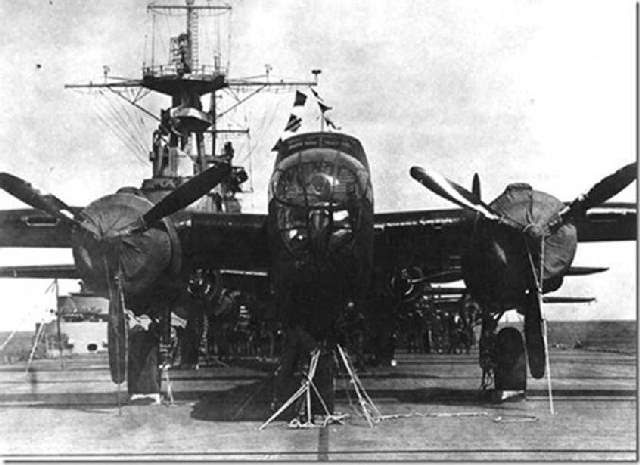 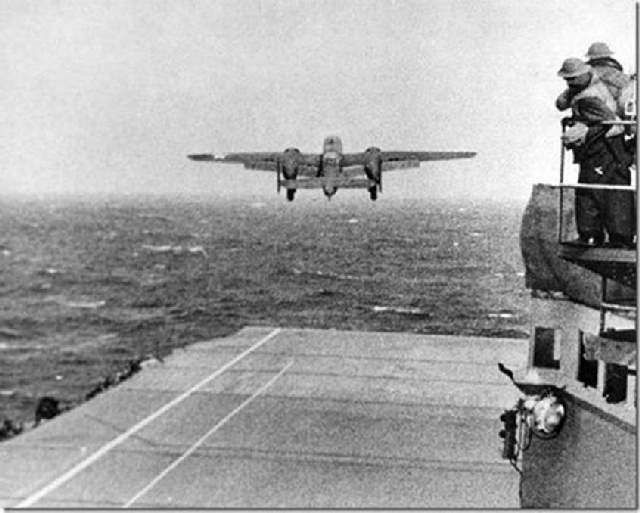 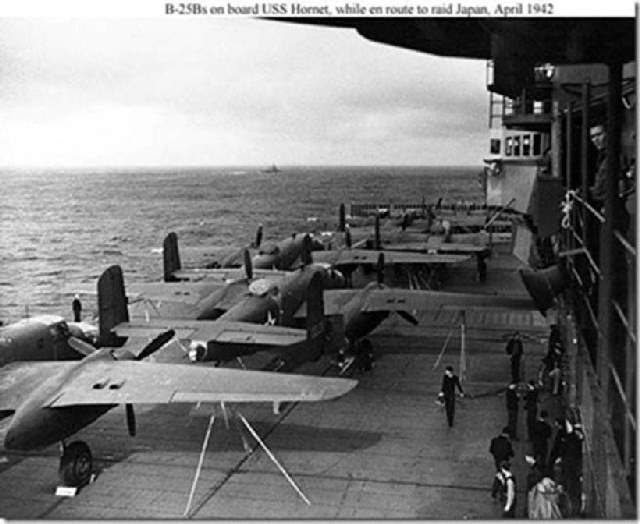 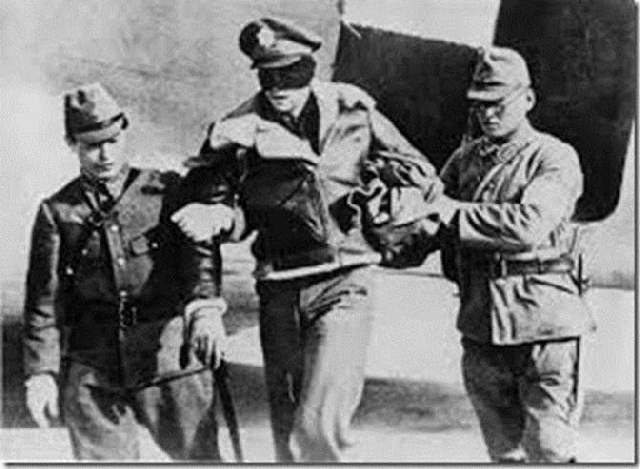 The Doolittle Raiders sent a message from the United States to its enemies,

and to the rest of the world: We will fight. And, no matter what it takes, we will win.

Of the 80 Raiders, 62 survived the war. They were celebrated as national heroes, models of bravery.

Metro-Goldwyn-Mayer produced a motion picture based on the raid; "Thirty Seconds Over Tokyo ,"starring Spencer Tracy and Van Johnson, was a patriotic and emotional box-office hit,and the phrase became part of the national lexicon.

In the movie-theater previews for the film, MGM proclaimed that it was presenting the story…"with supreme pride." 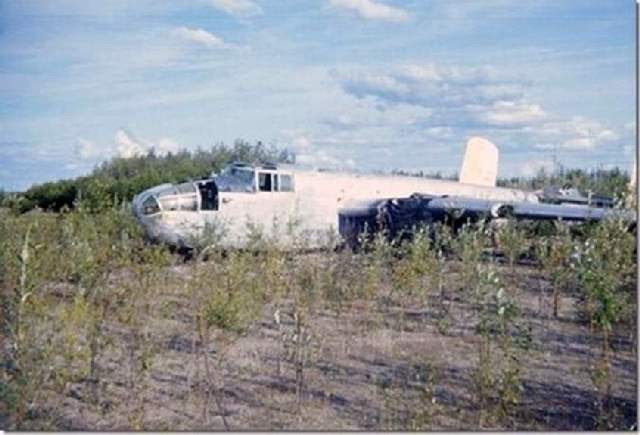 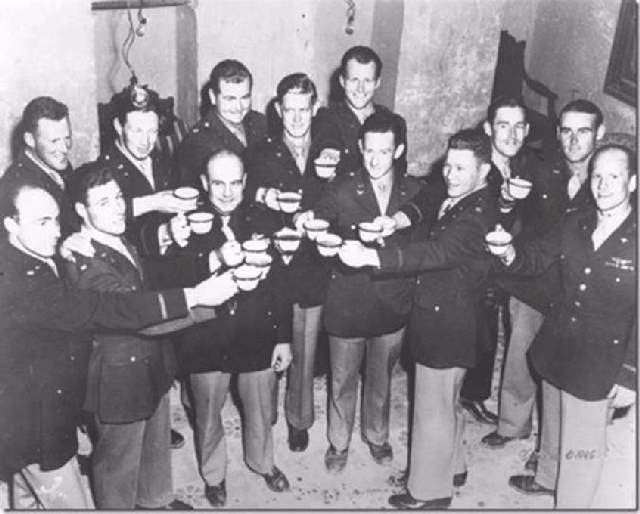 Beginning in 1946, the surviving Raiders have held a reunion each April,

to commemorate the mission. The reunion is in a different city each year.

In 1959, the city of Tucson , Arizona , as a gesture of respect and gratitude,

presented the Doolittle Raiders with a set of 80 silver goblets.

Each goblet was engraved with the name of a Raider. 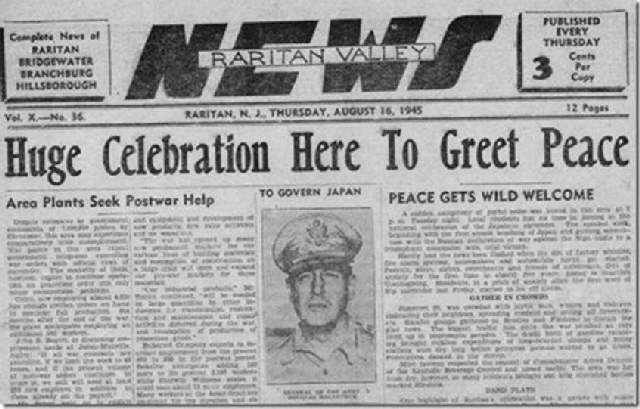 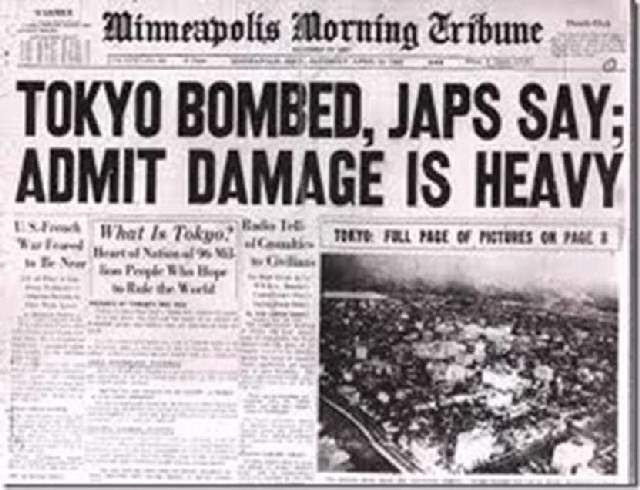 Every year, a wooden display case bearing all 80 goblets is transported to the reunion city.

Each time a Raider passes away, his goblet is turned upside down in the case at the next reunion, 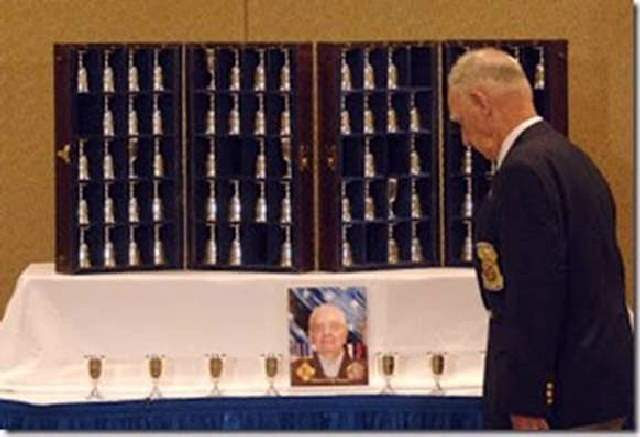 Also in the wooden case is a bottle of 1896 Hennessy Very Special cognac.

The year is not happenstance: 1896 was when Jimmy Doolittle was born. 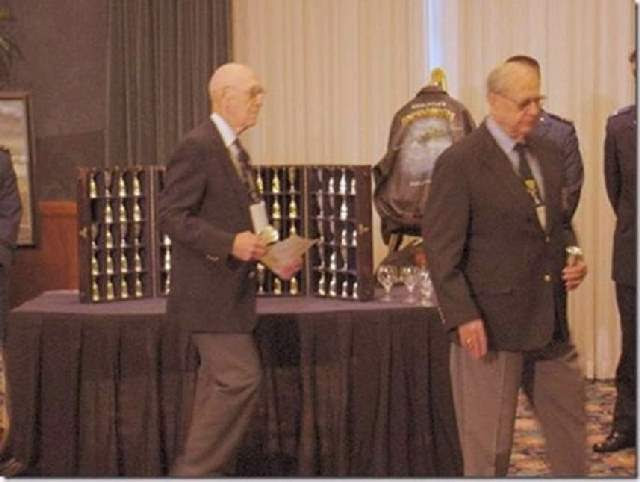 There has always been a plan: When there are only two surviving Raiders,

they would open the bottle, at last drink from it,

and toast their comrades who preceded them in death.

As 2013 began, there were five living Raiders; then, in February,

Tom Griffin passed away at age 96. 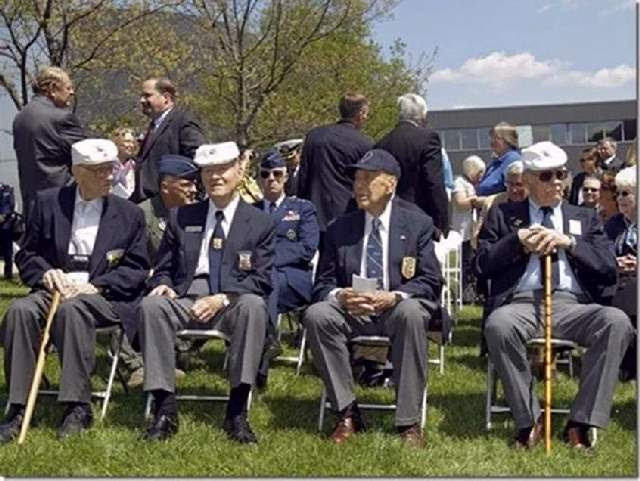 What a man he was. After bailing out of his plane

Over a mountainous Chinese forest after the Tokyo raid, he became ill with malaria,

and almost died. When he recovered, he was sent to Europe to fly more combat missions.

He was shot down, captured, and spent 22 months in a German prisoner of war camp. 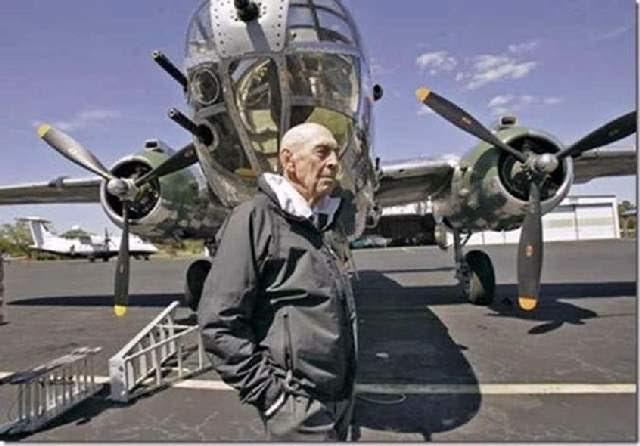 The selflessness of these men, the sheer guts … There was a passage in

the Cincinnati Enquirer obituary for Mr. Griffin that, on the surface,

had nothing to do with the war, but that was emblematic of the depth

of his sense of duty and devotion:

"When his wife became ill and needed to go into a nursing home, he visited her every day.

He walked from his house to the nursing home, fed his wife,

and at the end of the day brought home her clothes. At night, he washed and ironed her clothes.

Then he walked them up to her room the next morning. 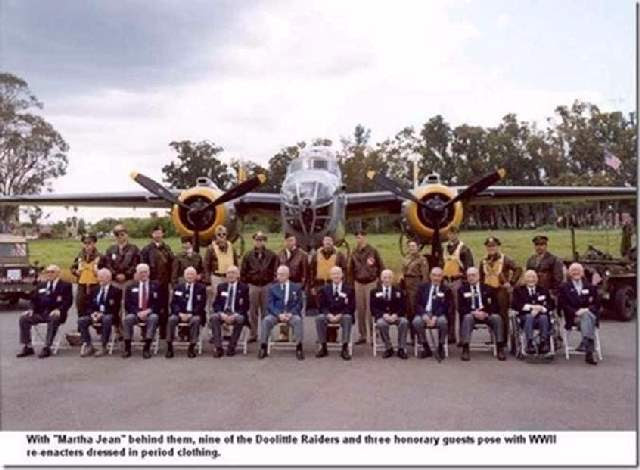 So now, out of the original 80, only four Raiders remain:

Robert Hite, Edward Saylor and David Thatcher. All are in their 90s.

They have decided that there are too few of them for the public reunions to continue.

The events in Fort Walton Beach marked the end. It has come full circle;

Florida 's nearby Eglin Field was where the Raiders trained in secrecy for the Tokyo mission.

The town planned to do all it can to honor the men: a six-day celebration of their valor,

including luncheons, a dinner and a parade. 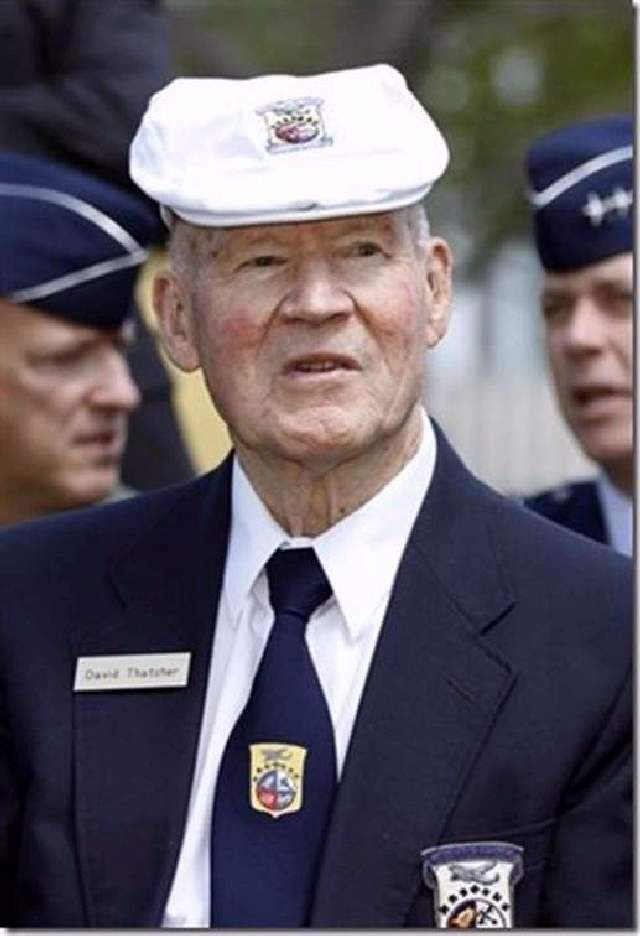 have tended to it in a way that is worthy of their sacrifice?

They don’t talk about that, at least not around other people.

But if you find yourself near Fort Walton Beach this week,

and if you should encounter any of the Raiders,

you might want to offer them a word of thanks.

I can tell you from first hand observation that they appreciate hearing that they are remembered.

sometime this year – to get together once more, informally and in absolute privacy.

That is when they will open the bottle of brandy. The years are flowing by too swiftly now;

they are not going to wait until there are only two of them.

They will fill the four remaining upturned goblets. And raise them in a toast to those who are gone. 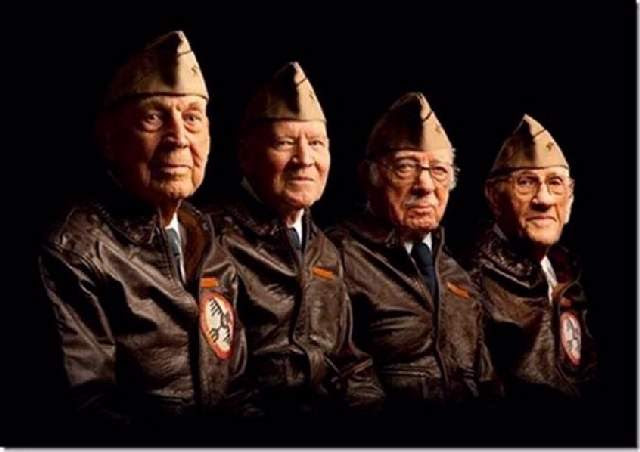 Anyone believe the Japanese & Germans would not have bombed Manhattan if they had the opportunity?

Truly amazing, thank you so much for posting that asaratis!

These were all very brave men. My upmost respect to all of them. Just taking off in B-25’s off the deck of the USS Hornet took exteme sized manhood. It’s true what they say, they don’t make them like this anymore.

I believe the term is brass set of balls. Lots of guys pretend to have them. Very few actually do.

For those who may be interested in reading more of the history regarding the men and the mission, here is a link to what is likely the most reliable source for such.

By spring, 1942, America needed a severe morale boost. The raid on Tokyo on April 18, 1942, certainly provided that – cheering the American military and public. Yet, the Doolittle Raid meant so much more, proving to the Japanese high command that their home islands were not invulnerable to American attacks and causing them to shift vital resources to their defense. Two months later that decision would play a role in the outcome of the Battle of Midway, the American victory that would begin to turn the tide in the Pacific War.

The bold text in the quote above describes what is (to me) the most significant result of the raid. The Battle of Midway took place just over a month later when the Japanese attempted to replicate the Pearl Harbor attack using two simultaneous naval attacks, one as a diversion and the other at the main target, Midway.

The fact that Japan now had to defend its homeland contributed a lot to our victory at Midway and thus adds to the importance of what the Doolittle Raiders accomplished. 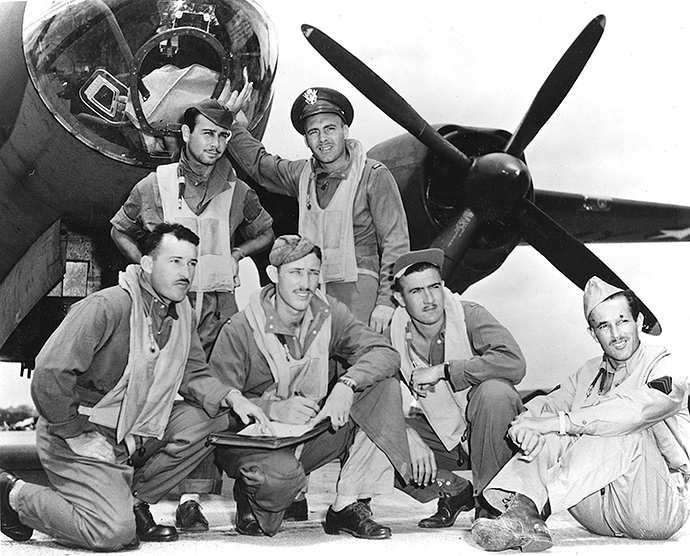 10 Facts About the Battle of Midway

The Pacific theatre of World War Two is not given much attention in Britain today but it made up a substantial part of the conflict. ...

And I have long known and reveled at the bold, courageous feat and their daring exploits.

I have read about them and the raid and it’s preparation and watched the film and many different videos about it.

Jimmy Doolittle was some guy. 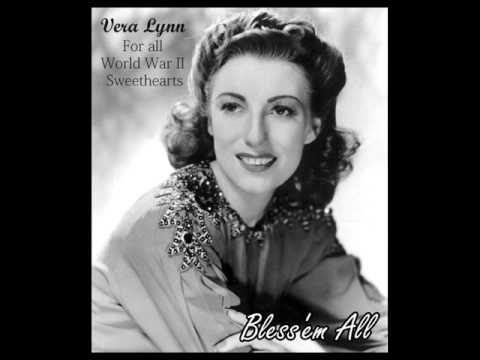 Yeah agree! This is a great thread honouring some of the bravest men in WWII. Of course, they were all brave for all who served but these men were pretty special!

The decision to sign up took courage, as most pilots and navigators and bombardiers at that early stage iinm, were not conscripted.

Then, it took courage to become fliers, which is a demanding and often unforgiving vocation.

Then it took courage to volunteer for a very dangerous mission without knowing the details.

Then the courage to try taking off from a carrier in a B-25, even though they practiced it endlessly on land in the marked off carrier space they’d be allotted.

Then the courage to strike the enemy when no one else yet had, knowing all the possible dangers of doing so.

For those who may be interested in reading more of the history regarding the men and the mission, here is a link to what is likely the most reliable source for such.

Dude, this OP was AWESOME!

And it took a TON of effort and time to create so lovingly and well.

Thank you so much for the act of honoring them and doing us the honor of posting it all here for us to appreciate.

Hat’s off to you!

I cannot take credit for creating the content. I received it just like it is in an email from a dear friend and patriot.

Thanks for sharing it.

And PLEASE pass along the compliment!