The Destruction of the West: How I was Kicked Out of the Society for Classical Studies Annual Meeting 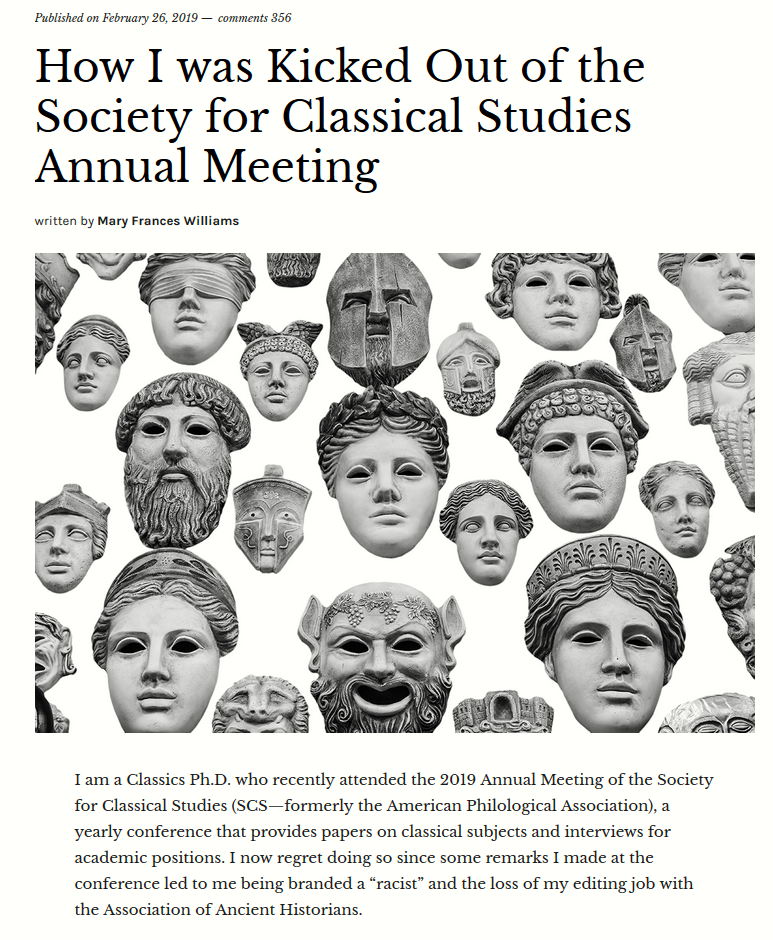 How do you feel about Greek and Roman history, the history of Western Civilization, being rewritten and erased before your very eyes?

They destroyed the white middle class. They destroyed our culture. They flooded our cities with shitskins. They fed us opioids. And now our history will be erased as well. It’s not just about white genocide anymore. It’s about the complete erasure of white people from history.

I did not interrupt you once, so you are going to let me talk. You are going to let someone who has been historically marginalized from the production of knowledge in the Classics, talk. And here’s what I have to say about the vision of classics that you’ve outlined: If that is in fact a vision that affirms you in your white supremacy, I want nothing to do with it. I hope the field dies, that you’ve outlined [sic], dies, and that it dies as swiftly as possible!

All I feel reading this right now is hate. Just pure hate.

How I was Kicked Out of the Society for Classical Studies Annual Meeting -...

I am a Classics Ph.D. who recently attended the 2019 Annual Meeting of the Society for Classical Studies (SCS—formerly the American Philological Association), a yearly conference that provides papers on classical subjects and interviews for academic...

They want to shoehorn feminism into this field, because it’s at the very root of the culture.

Oddly enough… Mark Zuckerberg’s sister is one of the prime movers in this effort. She is funding a journal for ‘woke’ classical scholars to warp the field in the same way they warped sociology and anthropology.

“Gildersleeve is unlikely to be supplanted by those who work on Pindar; in fact, it is impossible to read the poet in Greek without Gildersleeve’s assistance with Greek grammar, myth, genealogy and history. It struck me as odd to argue that his scholarship should be disregarded because of articles he wrote in the Richmond Times-Dispatch. There is nothing in his commentary (or his Latin grammar or work on Greek syntax) that comes even close to being racist. How can we not use him? Or is it fine to “use” anyone, even if they are racist, as long as they are not given any credit in the text?”

I think the writer should look more deeply at what she herself wrote to answer her puzzlement.

The woman in question lamented that her BLOG did not count as her doing work.

She cited Guildersleeve’s newspaper articles – the blogs of his day – as reason to give him the heave ho.

She is really being consistent. Her advocacy is what she views as her work. Being a classicist is not what she’s about. Guildersleeve’s advocacy was his only importance and indeed it was improper of him to, per another speaker, start a society because for pretty much the same reason.

Recently I started a thread where a fellow commenting on an article in the American Spectator had been told by a neighbor to kill himself.

These “scholars” are advocating killing their fields of study.

Again, their advocacy should count … and the Classics die.