# The Dangers of Government Debt

It is that time again when liberals, sensing the possibility of being in control, are revving up the debt engines. So many things need to be done in a post-COVID world, and there is so little revenue to pay for it. Debt is the way out, they claim.

Now is the time to borrow a way out of the crisis. Congress has not even waited for the New Year. Bipartisan efforts are currently underway to negotiate a quick fix for the bargain price of just under a trillion dollars.

Unfortunately, debt addiction affects both political parties. Every administration this century has run budgets at a deficit. The average deficit over the last two administrations has been around one trillion dollars annually. The COVID crisis has been an occasion to throw caution to the wind and borrow like there is no tomorrow.

Some Republican legislators maintain the role of a fiscal conscience. They loudly complain about deficits, especially when the opposition is in power. However, the uproar has diminished as officials scramble to find the means to throw money at the problems they want to go away.

The latest buzzword in economic circles is that Americans should not deplore but embrace debt. They should even learn to love it as a saving tool in a chaotic world.

Of course, most Americans need no tutorials on how to embrace debt. Consumers are buried in some $14.3 trillionof it. They manage to spend it on houses, cars, education, home improvement, and credit-card charges. Everywhere they go, they spend beyond their means. In the frenetic intemperance of the marketplace, embracing debt comes all too readily.

However, the rules that apply to consumer debt that can end so badly do not apply to government spending. Such fiscal acts apparently have no negative consequences.

Thus, liberals are asking that the floodgates of federal debt be opened. Now is the time to help those suffering from the coronavirus crisis, build up its sagging infrastructure and finance their wish list of underfunded causes.

Liberal economists say there is no cause to worry about federal debt. The New York Times ’ Paul Krugman, for example, explains that the nature of government debt has changed. He claims there has been “a fiscal paradigm shift” that makes borrowing different and desirable. “The bottom line is that government debt just isn’t a major problem these days.”

They wrongly claim debt is not a major problem for many reasons. One of them is that America borrows in its own currency and thus can always issue more money to finance its debt. The circular logic of the Modern Monetary Theory (MMT) is popular among liberal legislators anxious to receive a blank check to expand federal spending.

However, the main reason why columnists like Krugman encourage debtis because of the low-interest rates that make money cheaper to use. He argues that there are no red lines in the sand dictating the limits of how much can be borrowed. Conservative legislators conjure up these red flags to scare people into not spending money. 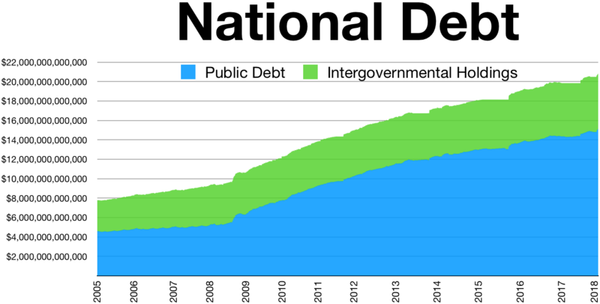 Thus, he says cheap money costs the taxpayer little in the long and short term in interest payments. If there is a time to spend, now is that time. The U.S. government should take full advantage of this opportunity to invest heavily in the future. That means making big government bigger. That means public investment in climate control, education and children (as long as they are not unborn). The panic of the coronavirus gives the spending spree a sense of urgency.

What is there not to love in this new fiscal wonderland where every liberal desire can be fulfilled as if by magic? There are so many reasons to embrace and love debt.

The Krugman solution is based on very dangerous assumptions. What he proposes is the equivalent of borrowing money from oneself, over and over again with an ever-increasing principal. It might also be compared to paying an extra-low minimal monthly payment on an ever-increasing credit card bill. As long as people make timely payments, everything will work out fine.

It presupposes order and stability over the long term. Krugman affirms that in today’s upside-down world, there will always be very low-interest rates. He notes that “all indications are that they’ll stay low for years to come.”

Issuing government debt also assumes that people worldwide will want to buy American debt – and a lot of it. As the world’s reserve currency, most people see treasury bonds as a safe harbor despite their low yield. However, should something unexpectedly disastrous happen to America, all this could change – just as life changed with the coronavirus crisis.

Such wildly optimistic assumptions are dangerous. One great financial calamity could bring down the whole system as it almost did in 2008. It would introduce a new “fiscal paradigm shift” of a different nature.

Changing the Nature of Things

There is something metaphysical in all this debt magic. It reflects the socialist mentality that holds human nature can be changed, and the most bizarre schemes can thus be implemented.

In this case, the “love-debt” scheme contains the idea that people will act responsibly once they realize they possess a money machine that produces as much cash as they want. Such wishful thinking ignores the fact that fallen human nature always seeks the easy way out. People will turn to the cash machine whenever difficulty strikes. In addition, corrupt people will find ways of gaming the system to favor their self-interest. Once the floodgates of unbridled debt are opened, they will follow the unbridled passions to ruin. Human nature has not changed in the face of easy money.

However, liberal moneymakers also want to change the nature of money and debt. Money is an obstacle for those who want a world without restraint. It creates inequalities that liberals wish to overthrow. Money forces people to make an effort to exchange the value of their actions for goods and services. People with jobs delay gratification by working so that they might later enjoy the fruits of their labor. Those who work harder will earn and prosper.

Debt is a ticket to instant gratification. It delays working so that people might enjoy now the goods and services they desire. The need to pay back loans curbs people’s desire to borrow and introduces an element of responsibility.

Living in the Krugman Fantasyland

In the Krugman fantasyland, the nature of money changes. It is no longer the same means of exchange, measure of value and storehouse of wealth. Money becomes the great equalizer that allows everyone to share wealth regardless of the disparity in their efforts. It becomes a mechanism created out of nothing to serve the political ends of government. Debt is no longer a burden that needs to be paid off. It is a revolving door of obligations that can be put off indefinitely. The nature of debt changes when there is no intention of repayment.

When debt has no immediate consequences, gratification rules. A society thus organized is beholden to the only real power left – a strong central government ever ready to issue more money to “borrow its way out of every crisis” until the day of reckoning comes. If they choose to do this in their personal lives, the consequences are theirs alone to bear. However, it is criminally negligent for political leaders to clamp the debt millstone around America’s neck and still expect the country to swim its way to safety.

Those who embrace and love debt do so at their own risk.