The Curious Connection of Julian Assange, DOJ, and the FBI

Having worked in DC as an Attorney under Contract with DOD one thing I learned is not the handshakes and smiles in formal meetings that mean something, but the filed motions and lateral moves of individuals that define the swamp survival from the TOP all the way down to the lowest denominator! The hierarchical structure of its machinations is designed to compartmentalise the true motives of bureaucrats where endless paper trails reach dead ends when going from one agency to another. These are the insular barriers to which leads run cold for those seeking a definitive answer in hopes they eventually give up by way of contrition.

Having said that, this article caught my attention today as to why Julian Assange is still rotting away in a UK jail cell, and the explanation given to where the motives and the reasons behind them, connects the dots in the most plausible way possible. Sundance having the same experience as me as an attorney working in DC seems to be hitting the mark in explaining the various moves by DC operatives from Sessions recusal to Rod Rosenstein’s role to the present discourse of the DOJ and FBI it now starts to make sense with greater clarity.

Take a few moments to read the linked article and let’s it’s contents sink in for a bit. What are your thoughts? What are the key points that are to be scrutinised further? 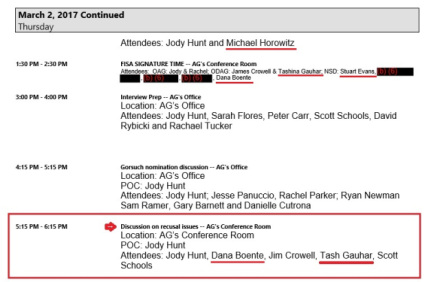 The Scale and Scope of the DOJ Control Agents – DOJ FISA Official Quietly...

Rumor in the DC grapevine is that a few weeks ago Tashina Gauhar was quietly removed from her position as lawyer for the DOJ National Security Division (in charge of FISA applications).  This remov…

I put my curse on all of those who were instrumental in his persecution and imprisonment, and hope they all die of cancer, slowly and painfully.

Don’t let your emotions get in the way of your intellect when making a proper analysis of what this post is about! It certainly isn’t about your feelings in the greater perspective of things.

as to why Julian Assange is still rotting away in a UK jail cell,

Well excuse me for becoming ‘emotive’ over something like ‘as to why Julian Assange is still rotting away in a UK jail cell’ after being forcibly incarcerated for 7 effing years of his life.

No! Try reading the OP first then make a intelligent comment. Coming here with expressed anger without reading what I posted defeats the purpose as why this is a forum and why I posted this! So don’t get upty with me, get a clue!

Kindly do not lecture me on what to post and what not to post in my replies to open threads. Thank you.

I created the thread asshat, so try reading before making stupid comments, otherwise troll somewhere else! Like I said this is not about your feelings!

What, because you ‘created the thread’ gives you the right to censor replies to it? Get a grip ffs!

No because it requires reading and using reading comprehension skills to make an educated comment you dimwitted troll! If you are so butthurt about not being able to express your feelings you are free to create your own thread topic to air your grievances on such subject matter! Now stop trying to derail this thread FFS!

I made a one-sentence salient and in-context comment and you get your knickers in a twist about it with a hysterical song-and-dance accusation of derailing your precious thread. I say again - get a fucking grip.

No you get a fucking grip! Go troll somewhere else! Your comment does nothing to contribute to the thread topic!

Then why did you raise in the OP the matter of his being maltreated if you didn’t want it to be read then? WTF!

Did you read the attached link? Or does your dyslexic disabilities prevent you from doing that?

I was specifically clear in the OP about the required reading part, something your baked brain can’t seem to comprehend!

Go and lay down in a darkened room for an hour until you get over your weird tantrum. Or are you blaming me for the fact you don’t have any takers for your precious bloody thread? Jesus wept!

Oh I see you can’t answer whether or not you read the linked article which might explain why you are pivoting with such nonsense! BTW there is no response to this thread because the subject matter being discussed pertains to US interests, and thus most people in the US are probably not awake yet! If you actually read what the OP is about you would know that but instead you just have to make more comments exposing your ignorance!

The reason I was selective is because of the mention of the DOJ and FBI, so as you say, I’m not interested in the US aspect because I don’t have the necessary knowledge, nor want it. Jesus what a fucking storm in a teacup you’re making of this.

Then if you know that, then why bother commenting at all in first place?

You started the storm by being defensive with your retort hence the fact I mention your feelings had nothing to do with what the OP is about! Holy crap dude your cognitive functions are not fully awake yet today!

Wha’evah - have a nice day.