This is priceless and I think I will save these quotes for my scrap book! If you have others please post!

—I still didn’t know who Chris Steele even was as of Aug 2016. No idea. Total mystery.

(Sat next to Marc Elias who was paying Fusion GPS. Podesta was also being briefed on the dossier reporting by Elias, as was Clinton’s campaign manager Robby Mook)

—We received a version of the dossier from [Glenn] Simpson

Comey (signed on a FISA application):

—This is a “VERIFIED APPLICATION”, using the Woods Procedures, in Oct 2016

—We wouldn’t have got that FISA warrant without the dossier

—Dossier allegations only “recently” “checked out” by FBI

And that’s off the top of my head

Link to this thread: 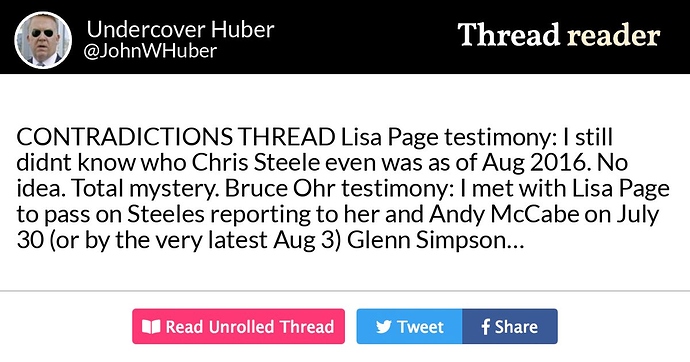 Thread by @JohnWHuber: "CONTRADICTIONS THREAD Lisa Page testimony: —I still didn’t know who Chris Steele even was as of Aug 2016. No idea. Toruce Ohr testimony: —I met with Lisa Page to pass on Steele’s reporting to her and Andy McCabe on July 30 (or...