The burning question of the 21st century - A rough start

What the hell ever happened to the Chipwich? And Why?

And while I’m at it, Why the F*ck isn’t there a store in Pittsburgh that sells GREEN Tabasco? Has it been discontinued? Nobody told me, damn it! …Pffft!

Green Tabasco? I can still find here in HK, so I don’t think it has been discontinued, rather it might be an issue of a stores decision to cut it out of its inventory due to lack of sales or demand!

Not sure about “Chipwich” but it would be a shame if that was discontinued!

By the way, if you really like hot sauce, try some TABANERO Extra Hot Hot Sauce…

By the way, if you really like hot sauce, try some TABANERO Extra Hot Hot Sauce…

Yikes! That stuff lights your mouth on fire, not to mention on the other end as well!

Actually it’s not that hot to me. If you REALLY want to intimidate your tolerance for the ring of fire, try this one:

Do people not like hot sauce in your neck of the woods?

I am being tempted to order this: 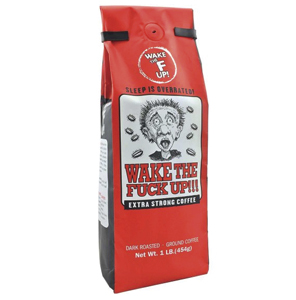 Wake The Fuck Up Coffee

Wake the Fuck Up Coffee doesn't leave much to the imagination when letting you know exactly what this product does. With a name like that, this coffee will crank your engines, but it also has an awesome flavor and aroma for either you or the person...

Edit: I just a moment ago ordered:

I’ll let you know how things work out!

You can buy it on Amazon.

I love tabasco sauce. There’s 24 different flavors of it in MRE’s.

The internet seems to be saying chipwich is making a comeback…but where?

Our entire household loves it HOT. Pittsburgh is more of a meat-n-potatoes town but we have adventurists!

I eat jalapeno peppers whole…sometimes three or four at a time. I’ll use hot sauce on just about anything…meat, eggs, potatoes, bread, crackers, As long as the taste of the food is not hidden by the sauce, life is good…the hotter the better!

I had a friend that suffered painful ulcers. Oddly, another friend recommended he eat two jalapeno peppers each day…midway between meals. Within a week his ulcers were gone. From then on, he ate two per day…the bigger the better.