The Brexit stalemate will never end

After Theresa May’s resignation, the Conservative Party must select a new leader and Prime Minister. However that new leader will face the same opposition to Brexit in Parliament that Theresa May has.

Meanwhile across the country, Nigel Farage surges in the polls - but is he controlled opposition?

So if Boris Johnson, for example, becomes the new Prime Minister, his promise to implement a no-deal Brexit if he can’t get a better deal is impossible, because he doesn’t have the numbers to get such an option through parliament.

However he could run the rope right out to the end, and when arriving at 31st October simply say “right, we’re out”. All he has to do is make sure that he (or other incumbent) remains in the saddle until after the final expiry, without giving ground to those who might plead for ‘another’ extension. In that respect we probably have Macron and Salvini on the side of Brexit.
[ never thought I would find anything ‘nice’ to say about that weasel Macron ]

Farage is leading British right-wing voters down the opposite path

Farage is not leading British right-wing voters. Farage is a master of ‘grandstanding’, which means he can publicly slag-off other public figures to the mirth of the audience without actually achieving anything. He is not responsible for Brexit, the EU are responsible for Brexit as has been pointed out by the German opposition party leader (or maybe she was in the German MEP group) who pointed out to Tusk and or Jean-Claude Juncker (Salary: €306,655 annually) that ‘they’ should have given the British what they were asking for, because the resulting budgetary hole will fall to Germany to fill … and they cannot afford it.

Here is the woman to whom I was referring

The British Parliament passed an Act banning a no-deal Brexit

Until recently I visited Britain at least once, sometimes twice a year. It’s now getting toward two years since I’ve been there. It would be nice to go again in October (Fountains Abbey Floodlighting & concerts) but it seems foolish. Brexit is due to happen October 31 and it’s only reasonable to expect huge and violent “demonstrations” as the date draws near. That will involve strikes - if the tube isn’t closed down the buses will be. If the air traffic controllers aren’t on strike the airline crews will be. The trains? To the extent that they have run of late - at least three flavlours of union to walk out. Though it looks less likely than a month ago, I still believe Red Jeremy will be the next Prime Minister and we’ll see re-nationalization of electricity, water, rails, and perhaps even one international and one domestic airline. London will make San Francisco look like a model of cleanliness and order.

Hello HBH, welcome to the forum

London will make San Francisco look like a model of cleanliness and order.

Now is a good time to visit, maybe even slightly later, but before the cracks appear in Boris’ resolve. When that happens the GBP will recover, currently you can buy for $1.24

There will not be country-wide demonstrations. Maybe in November depending upon what happens, but not before nearly the end of October, although I expect not until November.

Perhaps not such a stalemate. Will Boris go for an election?

‘Boris Bounce’ puts Conservatives back in the lead

July’s update is based on polling conducted after Boris Johnson was elected Conservative leader and appointed Prime Minister. It shows an immediate swing of more than 5pc from the Brexit party to the Conservatives, with the other parties holding fairly steady. This puts the Conservatives back into the lead as the most popular party with the public, according to the pollsters, with an average lead of about 4pc. This is the first time the Conservatives have been ahead of Labour since Britain failed to leave the EU in March, and the (joint) largest lead they have had since the last general election.

What was the popular vote on the brexit question? Wasn’t it a narrow margin?

Something that monumental should have required some sort of supermajority. 60%. 66.7%. Something like that.

I’m all for Great Britain scooting from the EU. I think it SHOULD happen. If I were a Brit I would be arguing for it there. But it needs overwhelming support from the populace. Not a narrow margin. Two years from now that same narrow margin could go the other way. That’s no way to implement something so important.

The stalemate will never end (as the thread title says) because there is no real consensus on the issue.

I’d like to get back to you on that but I want to take an early morning walk right now and I may be gone some time!!

More evidence that Boris means (most of) what he says. 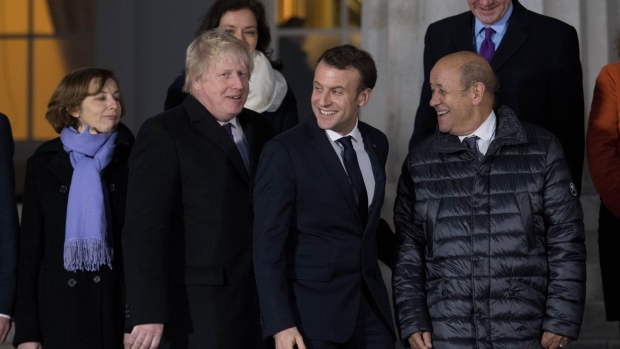 Bloomberg Opinion: The prime minister’s “madman” strategy will put a serious strain on EU unity, with enormous pressure to strike country-to-country deals with the U.K.

What was the popular vote on the brexit question? Wasn’t it a narrow margin?

Something that monumental should have required some sort of supermajority. 60%. 66.7%. Something like that.

The turnout for the vote was enormous, something like 85% of the electorate. Those that don’t turn out (15%) are deemed to accept the result of the vote … else they would have been out voting.

Therefore one way of casting these figures is that, with a 52%:48% split on voting, 59% of the population wanted or were happy with a brexit ‘out’ vote and 41% were not.

That is a commonly-made assertion (especially, in this instance, by the embittered Remainers?

); but setting ambiguous margins predicated upon agendas, together with arguments about how the question is going to be worded, could open a whole can of worms, so I think it has to be a simple-majority ‘yes or no’ referendum, and may the losing side accept it in the spirit of the exercise.

The most pointless political statement of all time ?

What I don’t understand is that there were EU elections earlier this year, but all the old faces, including Tusk and Merkel, are still around. WTF?

Dear friends, and other readers, I have been misleading you.
This was entirely unintentional … I promise.

It appears that only 72% of the electorate turned out to vote in the Brexit Referendum.
The result was still 52% leave : 48% remain as previously stated.

This is however good news (for me at least).
It means that only 35% of the electorate actually voted to remain in the EU; the rest (65%) want to leave … an even bigger mandate for getting the hell out of the EU!

I’ve just Twittered - What I’d like to know is why the remoaners suddenly believe that a bad deal is better than a no deal. I smell ‘agendas’! I understand threats have been made against JRM’s home and family. It’s no good the plod standing in front with their tasers, it will need the military to stop the mob. Scary times ahead I’m afraid. The Left have brought us to this, now it’s time for the Right to deal with it. Extremism always begets extremism?

I understand threats have been made against JRM’s home and family.

This was going on before this year. I was disgusted to see a clip of a man, out side JRM’s house, asking JRM’s son “do you now what bad things your daddy has done?”

I understand threats have been made against JRM’s home and family.

This was going on before this year. I was disgusted to see a clip of a man, out side JRM’s house, asking JRM’s son “do you now what bad things your daddy has done?”

They’re either anarchist scum, or extreme liberals, but it’s bound to be one or the other. Whichever it is though, I sure don’t like the way things are shaping up.