Modern slavery is alive and well in our own backyard. Where is #blm???

TEXAS — When she arrived in the US, the West African girl was just five years old, but she soon was responsible for caring for a Texas couple’s children, cooking, cleaning and mowing the lawn. She was abused and neglected for 16 years — until she escaped, according to a criminal complaint against the couple.

The pair has now been sentenced to seven years each in prison and nearly $300,000 in restitution, according to a Monday news release from the Justice Department.

Mohamed Toure, 58, and Denise Cros-Toure, 58, were convicted in January of forced labor, conspiracy to harbor an alien and alien harboring.

They both are citizens of Guinea — where the young girl was taken from — and lawful permanent residents of the US, but may lose their US immigration status and be deported to Guinea, the Justice Department said.

“I hope that today’s sentence brings some measure of justice and healing to the victim, who suffered untold trauma as a result of the defendants’ heinous crimes,” Assistant Attorney General Eric Dreiband said in a news release. “The defendants stole her childhood and her labor for years, enriching themselves while leaving her with pain and an uncertain future.”

An attorney for Toure said the couple was pleased with the lighter sentence, but maintain that the girl’s story was fabricated.

Investigators claim the young girl initially lived in a one-room, mud hut with her family in Guinea. She was still young when her father, who worked as a farmer, urged her to go into the city to work. She soon began working for Cros-Toure’s family in Guinea, according to the complaint.

In January 2000, the young girl — who was not named in the criminal complaint — was flown to the Toure residence in Southlake, where her first job was to care for the couple’s youngest son, who was about two years old at the time, the 2018 complaint says. She did not speak English when she arrived and was not enrolled in school.

The child’s workload eventually increased to include cooking, cleaning, doing laundry, mowing the lawn and gardening. Her day began around 7 a.m., when the couple’s children left for school and continued until they went to sleep at night, the complaint says.

She didn’t eat with the couple and their five children and slept on the floor, investigators said. The couple kept her at home, isolated her, forced her to do housework and care for their children with no pay and made sure she was entirely dependent on them, according to the criminal complaint.

Scott Palmer, Cros-Toure’s attorney, says the couple didn’t pay the girl for her work because she was like family.

“They didn’t pay her, but you don’t pay family members to clean your own house,” he said. “She lived there, like anyone else did.” He said that the couple wanted to adopt the girl.

But the Department of Justice says the couple “physically, emotionally and verbally punished her,” each time she disobeyed them or “did not perform the required labor to their liking.”

Toure’s attorney, Brady T. Watt III said those stories were fabricated in the girl’s attempt to stay in the US. Watt told CNN, the girl made the claims after her family asked that she be returned to Guinea.

“We know why this came about because this was her route to get a T-Visa,” Watt said. “She wasn’t a slave. She was charting runs on her Fitbit, doing modeling shoots.”

She escaped after 16 years

By the summer of 2016, the girl had confided to people who knew Cros-Toure and Toure about the abuse and had tried to run away, but she was always returned home, according to the criminal complaint.

In August of that year, with the help of a few former neighbors, she waited until Cros-Toure was gone from the house, and fled, taking with her a duffel bag, a backpack and her travel documents.

“Forced labor trafficking cases are notoriously difficult to prosecute — in part because victims are often afraid to speak out,” US Attorney Erin Nealy Cox said in a news release. “I want to commend her, as well as the witnesses who helped shine a light on her circumstances.”

“If we want to wipe out human trafficking, we need to remind witnesses to speak up, and ask the community to remain alert.”

The sentencing should send a message to those who abuse and exploit others, Jeffrey McGallicher, Special Agent in Charge of the DSS Houston Field Office said. 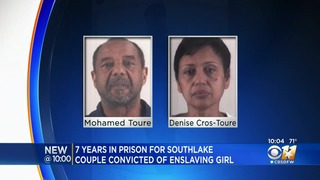 Texas couple sentenced to prison for forcing a young girl to work in their...

She was abused and neglected for 16 years — until she escaped, according to a criminal complaint against the couple.

Modern slavery is alive and well

Yes…among Muslims and Africans. Your title of “Texas couple” is lazy and misleading. We know who did this and we know why they did it.

The pair has now been sentenced to seven years each in prison and nearly $300,000 in restitution, according to a Monday news release from the Justice Department.

The System is broken, as it has been for many years - if not decades now. They should have gotten a lot more than seven years. The restitution was just the “icing on the cake”. Meaning, I am sure they could easily get that in no time. I doubt they are poor.

I doubt they are poor.

Nope. They can afford 5 children + an indenture servant.

Absolutely! But I am sure without a doubt, they are scamming the system…getting assistance…while working a good job. So, at least it takes care of the food for the kids. While the couple is “dining in luxury”.

They are probably running some kind of welfare scam or taxi hustle.