ANTI-terror cops are hunting a male suspect after 13 people were injured when a parcel bomb filled with “nails and bolts” exploded during rush hour in Lyon yesterday.

The man, aged in his 30s, was seen placing a bag outside a bakery in the Victor Hugo area of the city at 5.30pm local time before riding away on a bicycle, an official said.

An emergency services spokesman said: “A man in his mid 30s was seen placing a possible parcel bomb, and a hunt has been launched to try and find him.”

Alain Bardelis, of the local police union, said the suspected bomber had his head covered and was wearing dark glasses, but was caught on CCTV.

He said: “He was wearing a dark top and Bermuda shorts. Municipal cameras would have caught him on his bike.”

A witness living in a flat on Victor Hugo said: "We heard a monstrous noise, and our windows came in. We could see that people were running everywhere down below. I saw people wounded.

“The explosion was from the pavement in front of the bakery. We’ve heard it was a bomb packed with nuts and bolts.”

A local woman said the horrific blast happened outside her home where she had been standing ten minutes before.

She tweeted: “I am going to throw up. The explosion in the street, I spent 10 minutes before. It’s literally the foot of my house.”

The neighbouring streets are filled with soldiers while several fire engines have arrived on site of the explosion which President Macron branded an “attack”.

According to local media, the devastating explosion was caused by a parcel bomb which was filled with nails, bolts and screws.

He said the explosion occurred in or outside a store of the bakery chain Brioche Doree.

French leader Emmanuel Macron interrupted a TV interview to say: “There’s been a bomb attack in Lyon, there are injuries.”

He later tweeted: “Tonight I think of the wounded of the explosion in Lyon, their families affected by the violence that has fallen on their loved ones in the street, and all Lyon. We are at your side.”

The attack comes on the eve of European elections in the country, when millions will go to the polls to elect new MEPs.

France has been the victim of some of Europe’s worst terror assaults in recent years.

And later that year, in November, a group of terrorists unleashed hell on the capital city murdering 130 innocent people in a coordinated gun and bomb massacre.

Nice in the south of France was also targeted in July 2016 when a crazed extremist used a truck to kill 86 people who were celebrating Bastille Day. 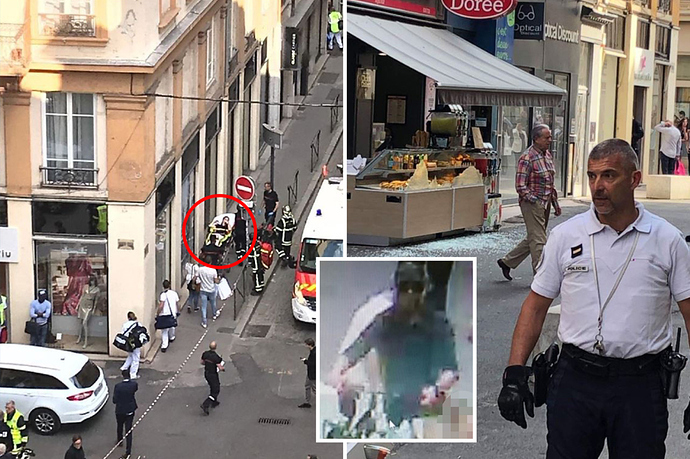 ANTI-terror cops are hunting a male suspect after 13 people were injured when a parcel bomb filled with “nails and bolts” exploded during rush hour in Lyon yesterday. The man, aged in h…

Bad day in France, I feel for them.

Unfortunately with all of the European ISIS members returning plus those that get in with the refugee influx this is more likely to become more common than less.

That’s ok. It’s all a part of celebrating diversity and getting the full experience of cultural enrichment. Their country was built on ideas. So their geography doesn’t matter, as you have said.

The Mossad operative is still on the loose, so who knows what it might do to disrupt Today’s YV protests as per the real plan behind this sloppy job.

(((Terrorist))) attacks days before European elections.
Who could be behind that?

Looks to be that way. No one really seems to even care that much about this attack. My fear is that the terrorists will recognize this and go bigger which is bad news for everyone.

Let them keep importing until they learn better , open borders leads to terror !!!

That was my thought after reading Farage’s comments about the MSM sandbagging the election results! It’s what happens when unelected bureaucrats are in fear of losing their cushy jobs, create a diversion and suppress voter turnout!

Why anyone could be so primitive, that they would allow an ideology to influence them, to the point they would wish to see a civilized culture back in the Stone Age, is beyond me.

It starts with ideology but by now it’s revenge.

The Quran’s Verses of Violence - The Religion of Peace 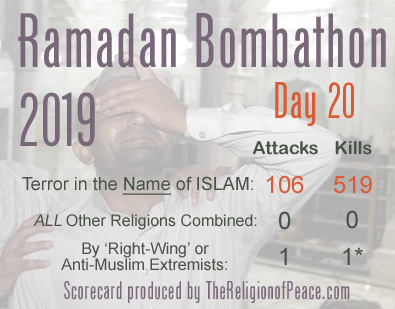 You are right but I just don’t think people really care what’s in the old religious texts more than they care about their personal experiences. The religion is a pretext for the revenge and power driven violence. Just my opinion of course.

One of the reasons I have little or no time for organized religions is, TOO MUCH MORTAL INPUT that can be interpreted to the point it can lead to violence. Even religious scholars have trouble deciphering texts - passages. I stick with the basic teachings of Christ & the Buddha. Do no harm in My Name - - - - - Go & try to sin no more. That alone is a hard road to follow through life.

Yet another steaming pile of unsupportable BS.

I was raised Christian but haven’t attended church with any regularity since I graduated HS.

I don’t need a church to keep my faith.