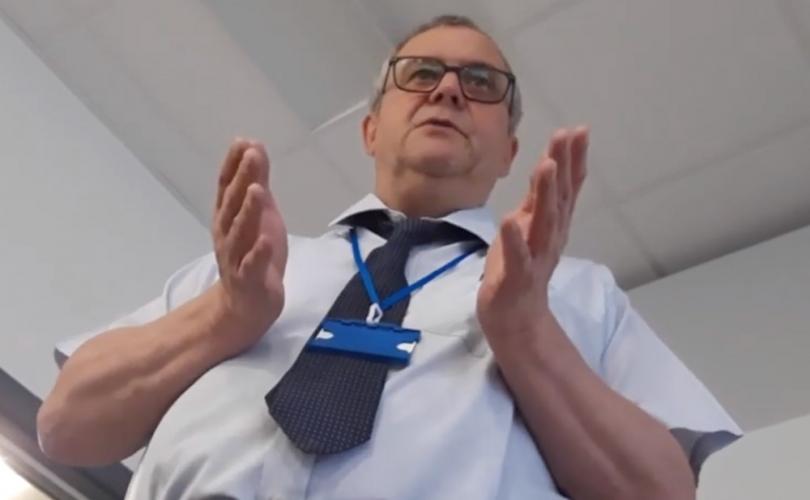 A teacher in Scotland kicked a student out of his class after the student insisted that there were only two genders, male and female. Video captured by the student on a smartphone shows the teacher lecturing the student outside the classroom for not being “inclusive.”

The brief video, filmed by a student named Murray and supplied by the Archbishop Cranmer Blog, shows the teacher becoming increasingly annoyed by Murray who calmly keeps insisting upon the binary reality of male-female human sexuality. It is not known who the teacher is or what school this took place in.

“I’m sorry, but what you were saying is not very inclusive,” said Murray’s teacher, “and this is an inclusive school.”

Murray then asked why what he said was not inclusive.

“There are more than one gender,” answered the teacher.

“That is my opinion and that is an opinion which is acceptable in this school,” said the teacher appealing to Scottish national school policy. “And I think yours, saying there is no such thing as anything other than male or female, is not inclusive.”

As Murray again explains to his teacher, “There are just two genders,” the teacher becomes visibly annoyed, bites his lip, and turns away.

The teacher then accused Murray of “choosing to make an issue of this. You had an opportunity to keep quiet. You were clearly given an opportunity not to pursue it and you chose to do so.”

“Yeah because I think it’s silly,” said Murray, who reiterated it’s silly to think there are more than two genders.

“Will you please keep that opinion to your own house, not in this room?” asked the increasingly flummoxed teacher.

“So you got to put your opinion out in class but my opinion has to stay inside my house? countered the student.

“I am not putting my opinion out. I am stating what is national school authority policy,” declared the teacher.

“Not every policy is scientific,” said the teacher, now stumbling for words as he turned to walk away from the conversation.

“I state something I believe in and you kick me out of class for thirty minutes,” said Murray.

“I’m sorry,” said the teacher, who failed to make his case against biological science and again said that Murray’s statement, “is contrary to policy.”

The video displays the increasingly common battle between​ biology and ​​​​​​politically-correct transgender ideology, which is being adopted by more and more school systems in the Western world.

"Shocking, isn’t it? This is an ‘inclusive’ school, and that appears to mean there is only one opinion that is is ‘acceptable in the school,’ wroteone blogger who goes by the name Archbishop Cranmer about the video. WATCH: Teacher kicks student out of class for saying there’re only two genders

I’m simply saying there are two genders: Male and female, the student insisted in a video he filmed of the event.

What a moron! There simply is no argument! It’s a fact what this kid is stating! Screw school policy, it’s bullshit! Transgenderism is a mental illness!

It seems this Drew Carey-esque looking teacher is rather reluctantly towing the school policy and not an actual shitlib. Needs to protect that pension.

The teacher needs a kick in the face and so does whoever wrote the policy.

“And I think yours, saying there is no such thing as anything other than male or female, is not inclusive.”

Trans is still either a female or male. Genetics says it all.

These are the same people who routinely scream “Science Denier” anytime someone points out the problems with the whole man made global warming panic.

Was it biology class? Or some social libfantasy class?

I think the teacher is trying to protect his job… his livelihood. He knows what will happen if he allows the student to say “only 2” without challenging him.

Anyone with any intelligence and ability for independent thought and reasoning is being unpersoned and excluded from all organizations and power structures. But this ‘teacher’ will go farting around citing his bureaucracy. Until it collapses.