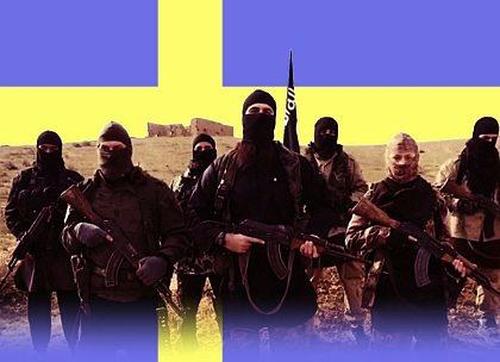 We’ve all read about the escalating migrant violence in Sweden’s “no-go” zones and many have posited that the so-called “multicultural invasion” can all be chalked up to religious beliefs.

In the interview below, a “jihadi” confirms that this is the reason for much of the violent behavior. He himself wants “what is best for” Sweden, and he believes that what is best is “Allah’s rules,” even if they fly in the face of Swedish values.

“I believe that Allah’s rules should prevail over all other laws.”

But that’s not all. Watch the shocking video.

A source in Sweden confirms that this video is accurate but believes that the number of radicalized individuals is likely much higher than 300.

According to the video, Sweden recently changed its laws, making it legal for migrants to travel abroad with the intention of committing acts of terrorism. You read that correctly – legal . Then the migrants are allowed to return to Sweden.

Many countries are saying no to more migrants

Other countries in Europe are beginning to refuse entry to migrants from Islamic countries. In an article, Selco wrote of the difficulties in the Balkans where thousands of migrants are stranded.

There are numerous reports that an influx of migrants is overwhelming the already-fragile system in the Balkans. You may think this is not pertinent if you don’t live in Europe. But just like the collapse of Venezuela, the Balkan War, and the collapse of Greece, there are patterns of behavior to which attention should be paid.

Some have gone so far as to call it a humanitarian crisis, and others have said the number of migrants is increasing rapidly. Although the official number is around 4000 migrants, it’s estimated that the real number may be as many as 30-50,000.

I asked Selco to share with us what he has witnessed. Here’s what Selco has to say.

Allowing radicalized individuals to return to Sweden after they commit acts of terror elsewhere is going to backfire. A person who becomes comfortable with violence generally has less and less difficulty committing more violence.

When I asked Selco if they [the migrants] outnumbered Bosnians, he replied, “Not yet. But in some parts, there are more capable immigrants then capable locals.” This crisis has caused havoc across the region, yet many locals are unaware of the depth of the issue. (Boy, does that sound familiar. Cognitive dissonance, it seems, is not an American problem.)

It should go without saying that all people of Muslim faith are not radicalized jihadists who want to kill those who are not Muslim and that all migrants are not intending to violently force sharia law on those in their host countries. But in Sweden, there seem to be plenty of violent people who do not have good intentions. If nothing else, the “invasion” of Sweden should be a cautionary tale to the rest of the world. Sweden Makes It Legal For Jihadist Migrants To Leave With The Intent Of...

“I believe that Allah’s rules should prevail over all other laws.”

Sweden declared itself a safe haven for terrorists? Dayum…that’s super woke. Good for them. It takes a lot of effort to be that wilfully ignorant of the world around you.

It’s 2019. Who cares about terrorists when Greta-Jesus is leading a children’s crusade against carbon, a real threat, right Sweden?

Doesn’t this make Sweden a state sponsor of terrorism?

In Sweden the real terrorists use weather warfare and gas light the idiot Swedes who will immediately pray to their new Goddess and throw their Kroner into the carbon tax wishing well. Jihadis are irrelevant. Sweden has hit levels of cuckoldry never thought possible.

There isn’t any sanity in Sweden’s government to allow this. Hopefully none of the Jihadists will make it back.What will it take for the people and government to take back the country.

Sweden is officially a state sponsor of terrorism. there is no stopping a terrorist from using a Swedish EU passport from coming into the United States without requiring a visa. We need to do something about this immediately and I am all four hitting Stockholm and Malmo with a couple of MOABs to remind Sweden of what time it is.

Islam is right about women.

Sweden is an enemy of America and the free world. President Trump should impose sanctions, ban all travel to and from Sweden, and start carrying out drone missions to take out these terrorists.

I am all four hitting Stockholm and Malmo with a couple of MOABs to remind Sweden of what time it is.

Yeah, you guys are always fantasizing about committing acts of violence but get wound up tight about a may be terrorist in the US.

So - what do you think about Sweden giving known terrorists a Swedish passport and a free pass to fly wherever they want to commit acts of terrorism?

Well that’s not going to happen.

Can you source that from something other than zero hedge???

There is a video from the BBC in the damn OP. That not good enough for you?

Old school tactic right there, don’t like the information…attack the source.