Sudan: Protest Against New Gold Mine in Northern State

This would be of interest to anyone who has ever lived or worked in the region. As gold resources dwindle, miners are moving closer and closer to populated areas which generally sets off fireworks.

A march was held yesterday to demand that a mining company set up near the village of Simit East in Northern State close down.

Activist Ashraf Abdelwadoud told Radio Dabanga that the march began in Simit, Simit East, Kabdi, and the neighbouring villages, then headed towards the company’s headquarters in the area between El Saree and Simit East.

The residents gave the company 24 hours to leave.

Abdelwadoud said the residents of Simit were surprised to hear that the Hamid Mining Company is preparing to operate east of Simit, near residential areas. The company would be using mercury and cyanide to extract gold from the ore.

The residents of the neighbouring villages held a meeting on Monday during which they decided to act immediately to stop this company and to protect themselves and the environment from pollution.

Activists from Talodi, Kalogi, and El Leri in South Kordofan carried out a protest in Khartoum on Tuesday to demand the suspension of mining companies operating in their region.

South Kordofan’s wali (governor) ordered all mining companies to stop operating in the state last week, but many companies do not abide by the order.

They chanted slogans calling for halting El Sunut, Juneid, Abarsi, and international mining companies, and pointed to the harmful effects of mining on humans, animals and the environment.

Director of exploration of the Sudanese Mining Resources Company Naji Mahmoud claimed during a workshop on mining that there are 424 mining companies in Sudan that belong to members of the ousted Al Bashir regime.

He said that 48 foreign companies operate in the sector, including Russian, Turkish and Chinese plants. He cited investment constraints because of influential former regime brokers.

The director also claimed that certain security services finance themselves in the mining sector.

Mahmoud asserted that geologists were prevented from entering the copper pit of his company unless they get permission from Lt Gen Mohamed Hamdan ‘Hemeti’ personally. Hemeti is not only a member of the ruling Sovereign Council, but also commander of the Rapid Support Forces militia set up by the ousted Al Bashir regime. 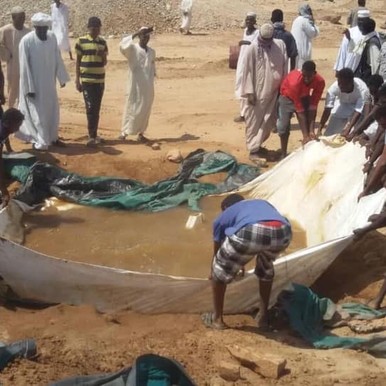 March against new gold mine in Northern State

A march was held yesterday to demand that a mining company set up near the village of Simit East in Northern State close down.

Why don’t people in the village just go and dig out the gold themselves?

They can’t exactly dig a small hole, sift some dirt, and find some gold. That’s not how it works. There is a lot of mechanical digging, blasting, and industrial chemicals involved in the process of mining gold. The days of getting rich off low hanging fruit are over.

Until Africans learn how to solve their own problems and create their own wealth they are always going to be in a position of being taken advantage of.

They need to get better about taking out their corrupt leaders. Or…not putting them into power in the first place.