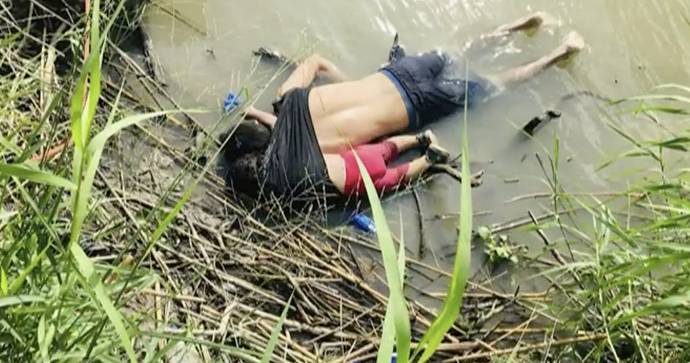 Play stupid games, win stupid prizes. If these illegals had stayed in their own country, where they belong, they wouldn’t be dead. This is not the fault of the US or our immigration policies. It’s the fault of third world morons who have no right to be here.

Mejia had arrived in Matamoros from Honduras with her husband and three children on May 8. They said Wednesday that there were only two families still in line ahead of them to file their asylum applications with the U.S. government. They started out in March from San Pedro Sula, the second largest city in crime-plagued Honduras.

After chatting, the Salvadoran family said they would come back Monday, Mejia said.

“I didn’t think they were going to decide to cross the river,” she said Wednesday.

Where is the outrage and sympathy over all of the American deaths caused by illegal immigrants?

No one likes seeing pictures of dead kids face down in the muck. There is a reason (((they))) only show us pictures of dead illegal kids. They want us to feel bad for them so we open our borders. It’s a psychological operation.

When you see pictures like this think about why you don’t see pictures of dead American kids killed by illegals.

I feel terrible for the child. The child didn’t have a choice. The child was a forced participant. The child did not deserve to drown. Our borders and our laws aren’t the issue. This is a case of bad parenting and bad decision making. Plain and simple.

Damn, this never would have happened if border control laws didn’t exist…

If they were enforced, deportations summary, and people didn’t think they’d get away with it.

Tens of millions of others have succeeded.

they probably made the mistake of trying to cross where they thought it was shallow during a rise in the river. The Rio Grande Water Shed has received record or near record rainfall this year along much of it’s length.

Death is the risk most of them are taking no matter how they attempt to cross illegally.

Risk of death is one of the few real deterrents in place.

Where is the outrage and sympathy over all of the American deaths caused by illegal immigrants?

No one likes seeing pictures of dead kids face down in the muck. There is a reason (((they))) only show us pictures of dead illegal kids. They want us to feel bad for them so we open our borders. It’s a psychological operation.

When you see pictures like this think about why you don’t see pictures of dead American kids killed by illegals.

Absolutely right. The Media didn’t say boo about the 283 people (from the link) who drowned trying to illegally cross that river last year, but now with this heart wrenching photo in their quiver, they jump on it with both feet. Anything to point an accusatory finger at Trump.

but now with this heart wrenching photo in their quiver, they jump on it with both feet. Anything to point an accusatory finger at Trump.

Oh yeah they’re salivating over another death to exploit and blame on Trump and all his supporters and voters. Leftist liberals are horrible people and they could care less about life & death unless it politically benefits them.

2016 was even worse considering all causes
Source

Personally, there is a huge difference between risking someone else’s life (the child) versus risking your freedom (the father).
Way too many “parents” are using their children as “pawns” so they can get here to America. It’s almost as if these folks don’t really care what the cost is. So, they are willing to make stupid decisions in order to “try to make a life in another country”.
So, therefore, once they get here in America - they find out it isn’t really as “rewarding” as it seem. Especially, when they have to be detain in these detention centers.

You’re right to a degree certainly with the “rentakids” and those being sold to “parents” so they can claim asylum at the border knowing they won’t be released but by all appearances that’s a small fraction of the whole.

In the 1800’s as families took out across the west to reach CA and OR Territories, they didn’t leave their kids in the east, the whole family took to the trail. Unlike the Hollywood version, to keep weight down and save the draft animals those capable would walk while the father or a hired driver handled the team. They’d end up walking 2/3-3/4 of the over thousand mile trek across two major mountain ranges and the brutal deserts of the inner mountain west. That portion is about as inhospitable from the Canadian Border all the way to central Mexico becaus of the same mountain ranges blocking rain to the flatlands in between except of course during monsoon season which might or might not every come from year to year.

Hundreds of kids and particularly women died along the way for the same reasons these people are making the trip across Mexico into the US.

Of course modern transportation, healthcare, and groups helping them along the way make it far less dangerous for those crosser than those who made the east/west trek here starting in the 1840’s.

Of course, when they get here the taxpayers take over paying all of their bills but that’s a different story.

Parents will risk their kids lives to make better lives for all, always have, always will.

Every day, about ten people die from unintentional drowning. Of these, two are children aged 14 or younger. Drowning ranks fifth among the leading causes of unintentional injury death in the United States.1

These people made a poor choice. But it was their choice to make and it ended in tragedy. Tragedy happens to people every day in every country as a result of the choices they make. This is no different.