Student says teacher pulled off her 'Women For Trump' pin 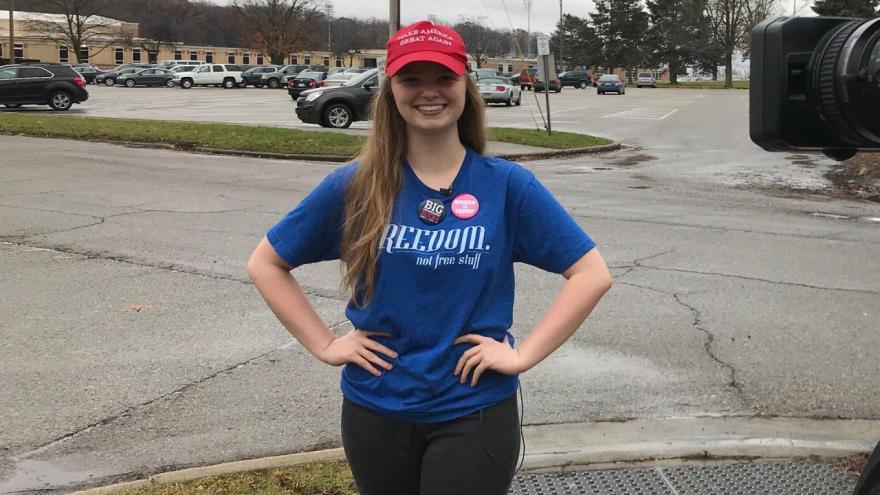 A Mason High School student turns to the police claiming that a teacher assaulted her during school hours because she supports President Trump.

Sadie Earegood told Fox 47 that she was assaulted when a teacher ripped her “Women For Trump” pin off of her shirt.

Earegood is 16 and a junior at Mason High, she said the teacher, whose name has not been released, started off by saying he didn’t like the pin she was wearing.

“I was just really shocked that a teacher would especially would do that,” she said. “He’s talking about the Women for Trump pin and I said, that’s fine you don’t have to like it, we can have our opinions.”

According to the student, Mr. Kato sparked the interaction by confronting Earegood over the pro-Trump pin, Wilks 10 News reported Tuesday.

Earegood described a struggle between herself and the teacher where he tried to take the pin off her.

“He grabbed it and I pulled and I tried to push his hand away and he grabbed my shoulder, just kind of put his hand there, and then he started pulling more and more and I just started backing up.”

She said the teacher then put the pin, upside down on his shirt, and stated that it belonged that way.

Mason Superintendent Ronald Drzewicki wouldn’t talk to us on camera, but he did say, “Once we have a complete understanding of the situation, we will take appropriate action.”

The Earegood’s filed a police report.

“I made a criminal assault and larceny report against the teacher," said Capi Earegood, Sadie’s mother. "He had no right to put his hands on my child over a pin or anything else. The first amendment gives everyone the right to express their freedom of speech. No one should get that upset about someone wearing a political pin.”

Mason Police Chief Don Hanson confirmed his department is looking into a report of an alleged assault on Dec. 5.

Earegood said that she won’t be silenced and just wants people to know that she will continue to show her political views.

“I just want him to know that it’s not okay to do that. I want this to be a learning experience for other teachers and I’m not going to stop wearing my political stuff.”

The Mason Board of Education meets Monday night and Fox 47 will be there to see if the incident comes up.

As reported by The Daily Wire last November, a high school student from the Hudson Valley area in New York, who wished to remain anonymous, said he was challenged by his liberal creative writing teacher for being a Latino Trump supporter. The student captured most of the back-and-forth on video.

“Within the heated political exchange, the liberal teacher perpetuated the notion of rampant anti-black racist police shootings in America, claimed she was ‘smarter’ than the dictionary, suggested FBI statistics were bunk because the organization is ‘seeded’ in white supremacy, and accused the Latino student of being a brainwashed ‘radical,’” The Daily Wire reported. “Although the 12th grader cited statistics and facts, the teacher maintained her victimhood narrative and carried on the debate for what the student said was well over the ten minutes captured on camera.” 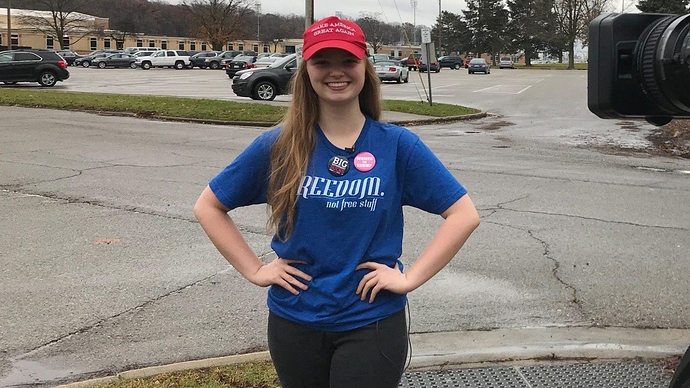 Student says teacher pulled off her 'Women For Trump' pin

MASON, Mich. (WSYM) -- A Mason High School student turns to the police claiming that a teacher assaulted her during school hours because she supports President Trump.Sadie Earegood told Fox 47 that she

If this story is true he should be immediately fired, lose his teaching credentials, be prosecuted for theft and robbery (theft by use of force" becomes an instant felony.

He should also be personally sued for everything he has and the school should be sued as well.

Well, when the investigation is complete, if her story is true, he should be fired.

It is however not a good idea for school kids to be wearing political messages while on school property.

If she was touched against her wishes, sexual assault should be tacked on to charges. Just a way for a pervert to touch a young girl. Ya gotta read between the lines. Any photos of the degenerate? Because a picture is worth a thousand word. First thing to look for is the drooling & the beady eyes.

Jan 26, 2017 · A Dallas ISD teacher is being investigated after video surfaced of her shooting a toy gun at an image of the president. … Teacher Fires Toy Gun At President Trump Image, Yells ‘Die ’ CBSDFW. …

Mar 05, 2019 · Subscribe to our channel! https://goo.gl/pyGqbu A teacher harassed a student who brought a Trump flag in class . The incident occurred at Tobb High School in Yorktown, Virginia.

No, none of that is good, nor was it good when Bush and Obama were both hung in effigy. But what’s your point? I said if what the student claims pans out in the investigation, the teacher should be fired.

Would you have preferred I called for a firing squad for him???

A good teacher works at being as totally objective as possible. If that cannot be achieved, that person should not attempt to teach. Psychological profiles for all teachers are sorely needed. I would never ever lead a child into agreeing with my personal opinions. It is about as unprofessional as anyone can get. A degree - teaching credentials don’t mean shit if you don’t respect the position.

Are you just posting that generally, or is that a response to me?

Yet the teachers can spew their leftist agenda in classes with out a thought.

It is wrong for a teacher to touch a student that is not disrupting the class or threatening the teacher.
Teachrs that allow their personal political beliefs to interfere in the classroom have no business being teachers.