How left can far-left Chicago go?

Socialism is surging in City Council.

A total of five democratic socialists, and possibly a sixth, won races for alderman either in February or in Tuesday’s runoff elections.

That sixth candidate, Rosanna Rodriguez-Sanchez is trailing longtime Ald. Deb Mell by only a few dozen votes. Mell, whose family has represented the 33rd Ward for more than 40 years, is hoping that mail ballots will help her maintain her seat.

Two members backed by the Democratic Socialists of America won in the first round in February.

On Tuesday, Andre Vasquez beat Ald. Patrick O’Connor, who was Mayor Emanuel’s floor leader. O’Connor also was named chairman of the powerful Finance Committee after Ald. Ed Burke was indicted on federal corruption charges. That race, and Burke’s fall from power, are all signals of a decline in the old-guard Democratic Machine on the City Council.

In the 20th Ward, Jeanette Tayor, who was also endorsed by the Democratic Socialists of America, easily won her runoff. She succeeds Ald. Willie Cochran, who pleaded guilty to a felony charge of wire fraud for misusing his campaign funds for gambling and other personal expenses, including tuition for his daughter.

Finally, Byron Sigcho-Lopez won his runoff in the 25th Ward. Incumbent Ald. Danny Solis, who has reportedly been cooperating with federal investigators in their ongoing City Hall corruption probe, did not seek another term.

To chants of “Andre, Andre,” Vasquez declared victory around 9:30 p.m. on Tuesday.

“Take a look around the room, we did this!” he said. “Every person who knocked on a door and made a phone call … that’s what got us the win tonight.

Sigcho-Lopez, currently on a leave of absence from the Pilsen Alliance, bills himself as an educator and public policy researcher at UIC. He had been endorsed by the Chicago Sun-Times.

There are many new faces at City Hall now. About half of the alderman were either elected or appointed after 2015 or won their seats for the first time this year. 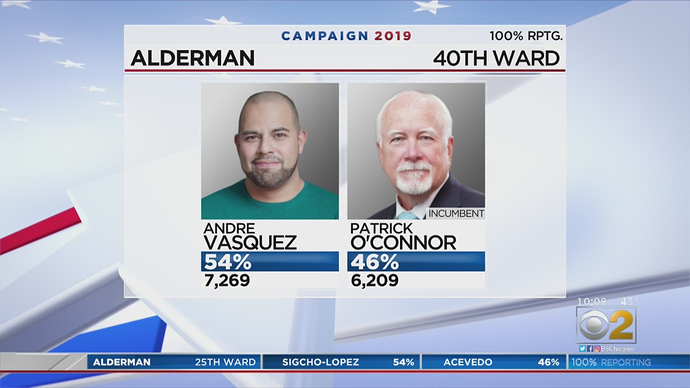 A total of five democratic socialists, and possibly a sixth, won races for alderman either in February or in Tuesday's runoff elections.