Socialist California wants to TAX all text message and go back 5 years to boot!

There is NO end to the tax crazy liberal retards .
Charges on all text messages may also be applied retroactively to messages sent in the past five years, which has raised questions concerning the proposal’s legality, Rufus Jeffress, vice president of the Bay Area Council, told the San Francisco Bay Area’s KNTV-TV. The “alarming precedent” could chalk up to a bill of more than $220 million for consumers, the Mercury News reported.

California state regulators have been working on a plan to charge mobile phone users a text messaging fee intended to fund programs that make phone service accessible to the low-income residents, reports said Tuesday. What happened to the Obama phones ? If you are not working why the need for a cell phone ? Drug hookups ???

and almost a year later:

Nothing is off limits for the grubby mitts of democrats when it comes to taking your money. Fact: IF this was to happen, users would simply ‘message’ using countless readily available apps instead of texting.

Im already on Signal, having all my message encrypted. The idiots that proposed this monstrosity dont realize that poor people are the ones with the latest iPhones and smart devices to deck out their rented places. Why do you think that they are poor? Visit the welfare office and find me someone that does not have a smartphone, LMFAO.

How about they get a job, a tracphone, and a pay as you go plan. I have an old iPhone 6s that I got on eBay and switched to Ting wireless. I paid 12 bucks last month. I use Wifi for everything including calls on the iPhone.

These a-holes will tell you if we work then we lose ALL of our benefits like Belmont to pay 90% of their rent , HEAP to pay their gas bill , SNAP for their groceries , Medicaid for ALL the ER visits for colds and flu , free rides to drug clinics , extra cash for ALL those children the keep making , etc.

Visit the welfare office and find me someone that does not have a smartphone, LMFAO.

How about those poor migrants traveling hundreds of miles , someone has to pay for their iphones too . 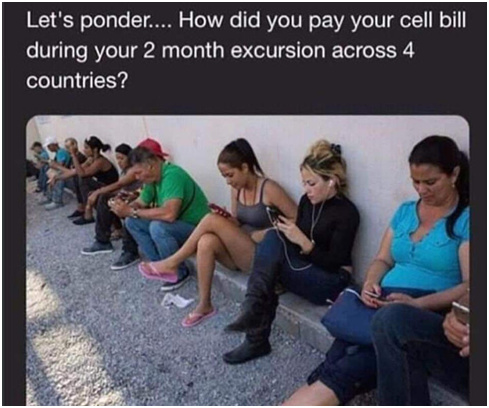 Those against the proposal said that wireless customers already pay into the state’s Public Purpose Programs, which they call “healthy and well-funded” with nearly $1 billion in its budget, the Mercury News reported. But state regulators disagree, saying the budget has increased more than $300 million over six years, KNTV reported.

Have these fools learned nothing about the protests going on in Paris or are they just doubling down on stupidity and arrogance?

They don’t want to do that because it requires WORK and an understanding of personal finances. They would rather have the hard working tax payer as their personal ATM machine and the rubes of California are all to willing to play along.

They don’t want to do that because it requires WORK

And they have to break a few more laws obtaining illegal FALSE SS cards , much easier to live off the great taxpayers . Just give them $50,000 and they will promise not to come back for 2 months .

Well, there are plenty of burned forests that need to be cleared thanks to Moonbeam. Allot a rake and a hoe and send 'em out to work

there are plenty of

Sanctuary cities to hide in too !!!

because it requires WORK and an understanding of personal finances

These are 3rd grade dropouts with zero skills they are dumbing down American and learning the dems treasure votes so they will offer them so much FREE shit for those votes ! Why are dems against voter ID ?

I predict some California toadie will propose citizens wear breathing monitors, so the air you breathe can be taxed.

They love those taxes !!!

I stole that one.