Soak the Boomers to Save Capitalism

It’s good to see that Bloomberg is addressing the Boomer issue. Boomers will never admit that by sheer luck their generation had it easier and better than the generations that have come after them.

The intergenerational transfer of wealth is underway. The only question is how the government will manage it.

“The reason we’re having this argument over socialism and capitalism,” Pete Buttigieg explained recently, “is that capitalism has let a lot of people down.” Buttigieg, one of the Democrats’ many candidates for president, is not wrong — but this isn’t class warfare so much as intergenerational warfare. As such, there may be a way to resolve it without the economic destructiveness that often accompanies class conflict.

Some history can help explain where the tension is coming from. Well-educated, affluent baby boomers have done exceptionally well over the last 60 years. Yes, that’s due partly to prudence and hard work, but it’s also the result of luck. Over the last half century, the U.S. and global economies have undergone profound changes that have redounded to their benefit.

The first boomers were the most fortunate. They graduated from high school and college into the strongest labor market on record and an economy whose productivity was soaring due in part to a massive public investment in technology. In 1966, the federal government spent 0.7 percent of U.S. GDP on NASA — a level of spending that Medicare wouldn’t reach for another decade, and Medicaid wouldn’t see until the 1990s. 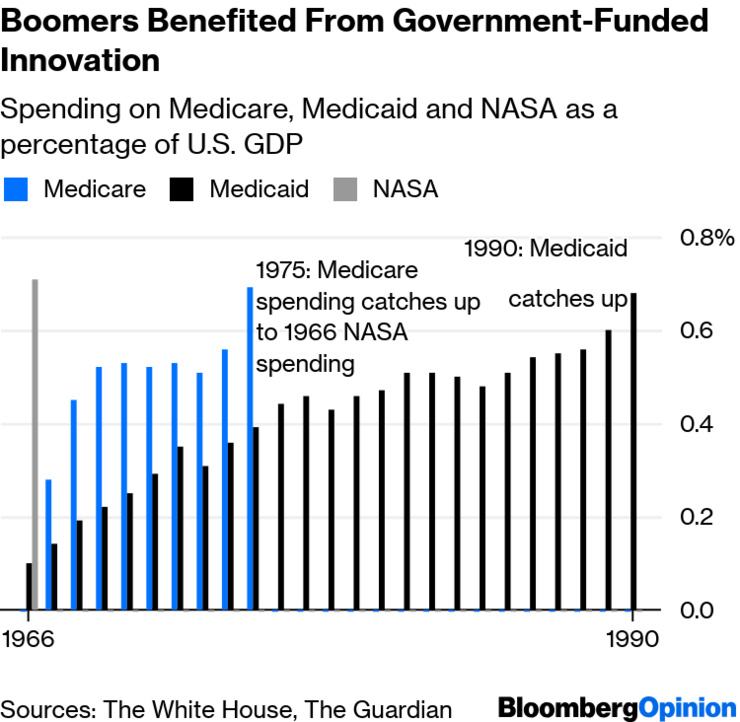 That cohort began taking out its mortgages a few years later. The principal on those loans was subsequently devoured by the inflation of the late 1970s and early 1980s, resulting in enormous gains for boomer homeowners. By the mid-1980s, just as the first boomers were entering their peak earning years and beginning to save for retirement, the Fed was embarked on a project of ratcheting inflation ever lower. This process would weaken the job market for new workers but set the stage for a series of asset price explosions, first in stocks and bonds and later in housing.

The rise of the global economy accelerated the trend. The fall of the communist bloc in the 1990s and the opening of China in the 2000s added hundreds of millions of workers to world markets, bringing cheaper consumer goods for those with money and more difficulty finding good paying jobs for those just entering the labor market.

It’s no accident, then, that many younger Americans take a dim view of capitalism. They were surrounded by great wealth, but they had limited access to good-paying jobs and faced ever higher housing prices. Many middle-aged Americans probably aren’t so sure about capitalism either: They may have had a brief taste of prosperity in the 1990s — yet not nearly enough to set themselves up for retirement or prepare them for the choppy labor market and wage stagnation of the last 20 years.

The question, then, is not the existence of these different perceptions, or of the intergenerational imbalance, but what to do about it. If the baby boomers continue to ignore it, the most socialist visions of the far left will continue to grow in popularity. The result won’t just be an expansion in government spending, but an intense effort to redistribute (or even destroy) accumulated wealth.

Rhetorically, that effort will be focused on the 1 percent. But it will soon become apparent that soaking the 1 percent is not enough.

Instead, the U.S. government should cut taxes on workers and replace them with taxes that target the lifestyles of the more fortunate. A straightforward way of doing this would be to cut or even eliminate payroll taxes and slowly replace them with a value-added tax, or VAT. Payroll taxes are the most significant taxes that young and lower-income people pay. Reducing or eliminating them would significantly raise the incomes of working people and encourage businesses to hire workers with less experience.

A VAT is a tax on the consumption of goods and services, and thus falls more heavily on those who spend a lot. The tax does raise the cost of living for those on Social Security, and that would have to be addressed. But it is also more progressive than a state and local sales tax.

There are other ways the government might change the tax code to help tamp down generational resentment. Eliminating the mortgage interest deduction, for example, would help deflate the artificial rise in home prices. The caps on mortgage interest and state and local tax deductions, which went into effect as part of the 2017 tax cut bill, already seem to be bringing down home prices in some expensive parts of the country.

Many of these changes would be unpleasant, to put it mildly, for affluent boomers living off their gains from their investments in the market and real estate. They might want to ask themselves, however, which is more painful: giving up some of their wealth — or ignoring the plight of the millennial generation and fomenting revolutionary change? 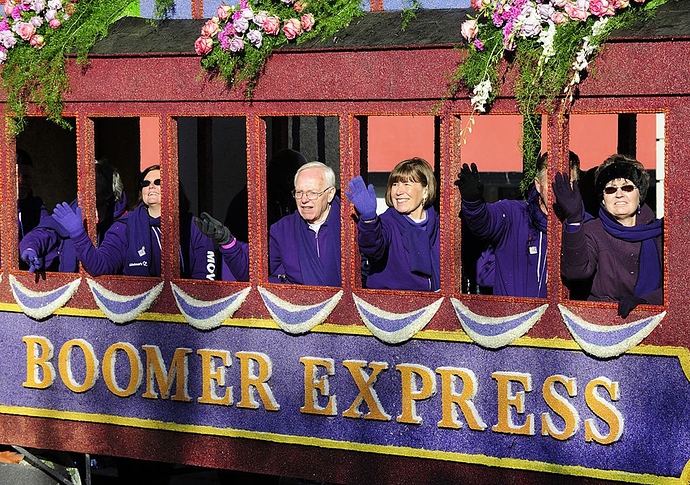 Soak the Boomers to Save Capitalism

The intergenerational transfer of wealth is underway. The only question is how the government will manage it.

What a crock of bull feces. You wouldn’t think inflation was so swell if you had lived through it. And the VAT is a stupid way to target old people, there is a reason the most coveted demographic in advertising are people aged 25-54. Oh and hello, bad job market? We’re at full employment now.

Maybe if Medicare only paid people who paid into it and not every obese whiner with an oxygen tank in one hand and cigarette in the other, it would be in fine shape.

Not to mention, after welfare reform, all the welfare workers started counseling people to go for social security disability instead. A 50% increase in the last decade alone.

You should try to address the real issues and the people responsible, the morons elected to congress instead of a generation of people who had little to do with your whiny problems.

That generation added trillions to SS which they will likely not get back as the fund is a pay as you go system and broke, the lie of the century brought to you by congress. They were flush with cash so they added cola, neat. The added non working spouses, cool, they added kiddies who had a parent die. The added disabled people real disabled and fake disabled people. That number doubled under that great president Obama. He changed the requirements for disables. And all that without paying for it as they spend every excess SS dollar to be re-elected.

And the latest is the open borders which suppress your wags and you blame it on boomers.

One might say we need term limits in congress which is long over due.

The inability of the current crop of Americans to critically think is very sad.

When I came to California in 1981 with my teaching BS, and MA -there were NO jobs in either field. No shit- the CA teacher of the year was laid off by the Tustin USD! Millennials piss and moan about housing prices and everything else not given to them for free, but a house at 140K in Irvine in 1982 was just as far away for me making 5.88/hour as it is for a moaning millie today.

Another reason leftist hate older folks is that older people have seen history in ‘real time’; they have not had bullshit sympathetic treatises on Pol Pot from Noam Chomsky, or read Howard Zinn’s version of how the rich ruined America, and how the White man is basically the source and font of all evil in the world.

I never hear the whining from young people with STEM degrees, or have a marketable trade. I’m guessing that’s because they have good jobs, and make good money. The whining comes from those who squandered their time taking useless majors because everyone knows, it’s far easier to skate through parroting back the words and views of some leftist prof. than having to actually learn.

You have to laugh and shake your head at some of these millennials and zoomers.

Well Bloomberg got a few things right in that article
Eg. after the fall of communism in the 1990’s it flooded the market with new workers

Cutting taxes on workers and replacing it with a VAT is actually something Ive advocated for , but I would add cut all Income tax

Eliminating Mortgage interest deductibility is a great idea and one Ive advocated for decades.

the rest of the article is nonsense and Pete Buttigieg is wrong about capitalism, here is a simple thing to think about.

To criticize something or a system it helps to understand it, and he and the rest of the left doesn’t understand Capitalism

Its funny he seems to be okay with capitalism when it benefits him but because most of them ( on the left) does not capitalize on the income part they want to criticize it.

as in for the baby boomer generation having it easier? please.
there are a lot of boomers who are broke and have squat for saving or retirement.
A lot of them were sold on the American dream, spend this, charge it credit that, borrow from peter to pay paul to keep up with the joneses etc

And then you have the boomers who said, screw this and Im going to do it my way vs my parents and society way and amassed wealth and some great wealth, so why are they so despised?

I blame some of the boomers for adopting marxist, leftist, socialist agenda and look how they raised their kids and some of the millenials are pathetic.

Going into debt with a useless degree, they cant find a job so they blame the Boomers?

Income taxes are an interesting topic.

The US has the most progressive Federal Income tax in the world and man want the top 10% to be taxes more. Many were opposed to the tax cuts decreeing them unfair as the bottom 50% got nothing, not a surprise when you pay nothing.

All the time this year another record year in tax collection while amassing another high deficit. Maybe me day people will finally realize that taxing isn’t the issue but SPENDING is the major issue we face. Some day when the debt is over the top, we cannot give away our treasuries someone will finally realize we are SPENDING too much.

In the mean time we have the kiddies saying we want to have the government eliminate our college debt. We want free healthcare, we want free college. We want, we want.

You are correct there are many people who have amassed wealth via hard work and sacrifice, many are poor as dirt and will rely on just SS which isn’t much to live on during the difficult years of aging.

Many of the young were conned by Obama you need a degree and I’ll make out easy for you and you can get a student loan. Now the bill has come due and they are pissed.

Gawds…I have to wonder who treated you so badly that you have so much hate and resentment.

You would better serve yourself to let go of whatever is eating you and direct the energy towards making your life what you want it to be.

Drop the ball and chain you are carrying and move forward. Yesterday is over and it cannot be changed. The only power you have is over today and tomorrow.