Smart Lens Puts the Computer Screen On Your Eye

Just imagine the extra space one would have by not having to accommodate a computer screen? This is pretty interesting in terms of what the future of personal computing is going to be. This technology is a little far away and won’t be available to the market for at least for another 5 years. Is this even possible, and if so what would the implications be? Will it reduce costs associated with purchasing computer hardware?

There is also other questions as to will it be safe? Are there health risks associated with this technology? Will this also have impacts on the brain? Does this also have the potential for Nefarious dark sinister things like mind control to happen with such a device?

I am certainly fascinated by what my imagination is serving up as a way to see and understand how this new technology would work. 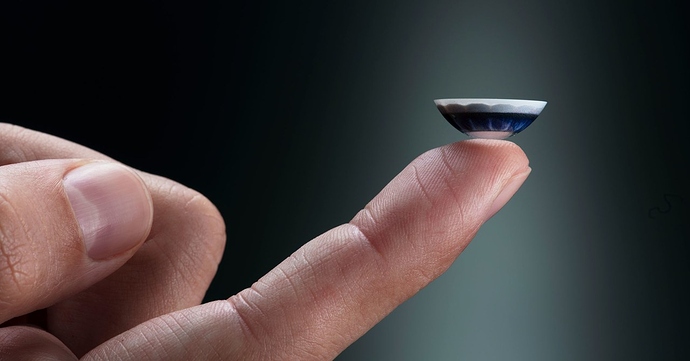 Mojo Vision's prototypes can enhance your vision or show you your schedule—right from the surface of your eyes.

Can you imagine a society where those are as ubiquitous as cell phones today. Everyone relies on them, without them you feel isolated- and who controls what’s on them, who monitors what’s on them… creepy stuff…

Can you imagine a society where those are as ubiquitous as cell phones today.

I really can’t, its so bizarre on so many levels I can’t quite comprehend what impacts this is going to have on humans in general. Also consider that the Camera would also become obsolete if the actual eye can snap off a photo just by looking at something, but with many 3 dimensional attributes to it.

We’re rapidly approaching a point technologically where just about anything we can imagine is truly possible.

We already have tiny head’s up displays for fighter and attack helicopter pilots projected onto a tiny screen like a visor attached to their helmets and projected onto the windshields of planes and cars so I’d say yeah, we’ll probably see this a viable technology in the next five to ten years at most.

Like so many technologies, this is first a promised breakthrough that will benefit the user/mankind. Once it is widely accepted it becomes a tool for marketers, and the government - imagine spam ads in your field of vision.

The poor would suffer the most, as they could get the contacts free or at a reduced rate - with advertisements, the rich would opt for the no ads plan - for a heavy fee. Just as with the smartphones of today, we would become enslaved to the pseudo -social interaction of the device. Oversharing would reach new heights as every arcane idiocy of one’s day would be broadcast worldwide…

Very plausible that with this slow roll out would play out exactly the way you just described. It will then beg the question at what price will this impact the human psyche and on society as a whole? Would everything thus become cloud base in terms of storage of personal information? Privacy?

The most vulnerable people would be people lost in virtual reality.

Lost how? Like they would lose sense of reality to the point they become insane?

Even with modern gaming consoles people can get so wrapped up in their gaming life they really lose their grip on reality.

People have literally gamed themselves to death because they would not leave the chair to eat, bathe, even go to the bathroom.

With essentially a VR console built into your eyes it would become increasingly hard to even distinguish between the virtual world and reality.

Sitting there wrapped in illusion as killers sneak up on them through the back door.

Oh so you are saying situational awareness becomes second priority. Isn’t that what we get now with people paying more attention to their smart phones?

Yes but at a much higher level.

Imagine being in a 20x20 room facing a 20x20 screen on each wall giving you a full 360 degree video monitor.

Try distinguishing reality from virtual reality in such an environment when you are living in it 24hrs a day 365 days a year.

Oh so you are saying situational awareness becomes second priority. Isn’t that what we get now with people paying more attention to their smart phones?

Yes. You can’t concentrate on real dangers wrapped in overlays on reality. If there is a threat you are a sitting duck.

I would expect even further fragmentation of humans.