She’s 28. She’s an Immigrant. She’s in Charge of Texas’ Most Populous County - Get Used to It 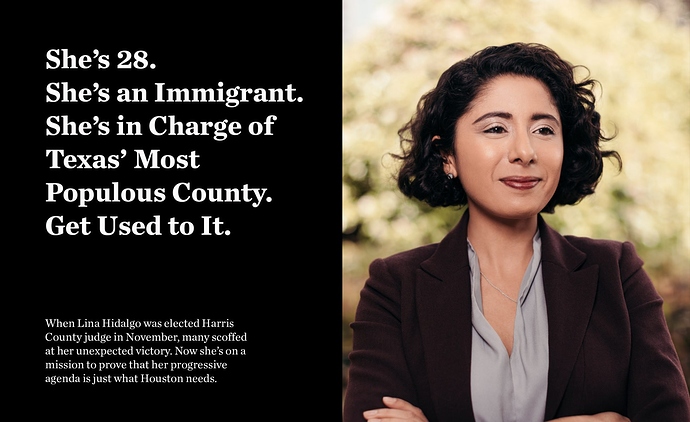 Smugness is off the scale.

I’m so tired of these idiots conflating illegal-immigration with immigration altogether. This article insinuates that if you aren’t a progressive then you are anti-immigration and anti-immigrants as a whole. Also Progressive is a misnomer. Regressive would be more appropriate to describe this particular ideology.

As for being an immigrant, the Left once again makes a point of confusing immigrants with Illegal Aliens. Deport all Illegal Aliens and let us have a 10 year holiday from even legal immigration … we need a reset.

Strangely enough they never once mention whether she’s actually an American citizen. I’m betting based on the way the article is worded she’s an illegal just like her parents.

This can only end in disaster. Once Texas goes blue it’s over.

Wait, hold on… you mean a densely populated city with a large number of ethnic minorities, chose a Democrat with the same ethnic background as them? OMG I’m shocked. How will I ever recover. God damn Observer you have owned me in the most epic triggering way possible.

Just another typical day as the West hurtles into oblivion.

“She’s young, she’s brown and she’s a she” The perfect qualifications to be a member of the ruling class in the 21st-century Western world.

Sounds like the biggest county in Texas is going to learn some hard lessons very soon.

Critics pounced on Hidalgo’s performance briefing the public, with some yearning for the leadership of her predecessor — “Bring back Judge Emmett,” one user wrote on Twitter — and others noting the “ums” and “likes” in her speech patterns. The Harris County Republican Party called Hidalgo’s “incomprehension” about certain air quality data “alarming.” But others noted, yet again, a whiff of condescension. Writing in the Houston Chronicle, John Nova Lomax said the criticism was “completely unfair and counterproductive,” and that the subtext was people wishing for a “silver-haired white man up there rather than a young Hispanic woman.”

You can’t criticize her, she’s a brown woman.

When did a low-level local judge become the executive of an entire county? She is a total moron as is the person who wrote this article.

Latinos have been in charge of South Texas for many decades…all of a sudden a liberal notices one in Houston… lol says volumns…when will they notice South Texas is the most corrupt region of the state.

If she is a legal immigrant, I think it’s great… specific politics aside… that she is not a hooker, drug mule, welfare queen.

If her politics encourage illegals, I would vote against her. But not because she is “an immigrant”.

I used to live in San Antonio. Hispanic politicians aren’t exactly a new thing. This writer is an idiot.

when will they notice South Texas is the most corrupt region of the state.

One would think this have something to do with the porous border in proximity with one of the most corrupt country down south. And Im sure this is why the county is also “populous”.

Thank you for posting this article although I wish you would have provided a direct link so that the writer and publisher would get the benefit of ad revenue for their outstanding work.

Anyway - I just light up with joy when I read articles like this. We need more strong Latina women in elected positions all over the country. The writer is correct. Get used to it because America is already starting to look like a very different place. Male and pale is no longer the way of the world. Those days are over.